New users at FanDuel Sportsbook can Bet $5, Get $150 Free for Thursday Night Football. 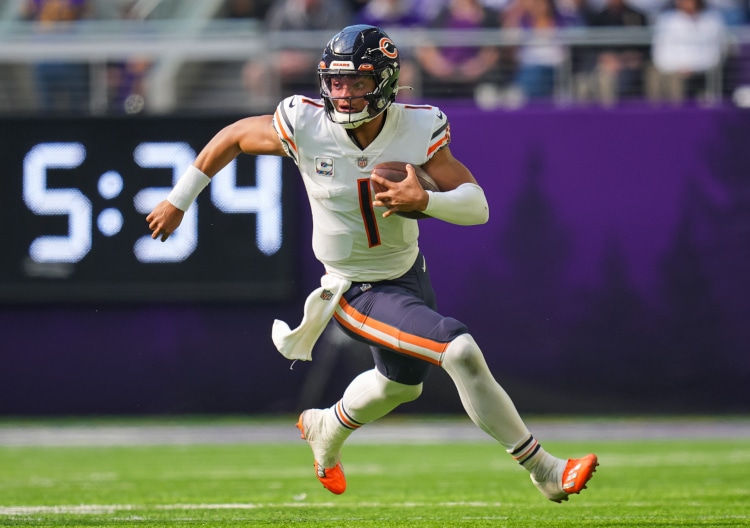 It seemed like yesterday we counted down the days until the regular season. And tonight, we are already kicking off the start of week six, roughly the ⅓ mark of the regular season, where the Chicago Bears will host the Washington Commanders on Thursday Night Football.

Roger Goodell and the NFL scheduling committee have tested our wits’ end these last few Thursday Night games. Last week, the Broncos/Colts contest was an absolute snoozefest, and this week presents the lowest game total of the NFL season to date – just 37.5 on FanDuel Sportsbook.

But football is football, and there are plenty of avenues to supplement your watching experience when betting with FanDuel. New users on the leading sportsbook site can join before tonight’s showdown using this link to earn a new Bet $5, Get $150 Free promotion.

Although neither of these teams is a serious threat in the NFC, there are plenty of storylines on both sides to tune into for tonight’s action.

Sports bettors who have not joined FanDuel Sportsbook can change that tonight. New users can earn one of the industry’s top welcome bonuses by clicking on any of the links in the article to claim $150 free on FanDuel Sportsbook.

Before you go to FanDuel and sign up, there are some crucial details you need to know:

Also keep in mind that FanDuel sportsbook free bets only pay the wager’s winnings – they do NOT include the original stake.

Plus, with the NBA around the corner, this offer also includes the nice cherry on top of 3 months of NBA League pass – completely free.

Your NBA League Pass information will be sent over within 72 hours of your initial $5 bet settling.

The 1-4 Commanders will travel to Chi-town to take on the 2-3 Bears in an NFC battle. Neither is a juggernaut of sorts, but there are plenty of interesting angles to dissect this game from.

Is the clock ticking for Carson Wentz?

In recent memory, the Carson Wentz rollercoaster has been one of the more grim downfalls to follow in the NFL. At his best, Wentz was a bonafide MVP candidate that looked like one of the best young quarterbacks in the sport.

But Wentz has regressed considerably from that level of play. Injuries have slowly derailed his mobility and playmaking ability, and his blemishes as a decision-maker have ballooned to the surface.

Wentz is currently on his third team, and despite being in the top 5 in passing yards, his head coach Ron Rivera did not hold back from throwing him under the bus this week.

In addition, it has been widely reported that Wentz suffered an injury in last week’s defeat on the biceps tendon of his throwing shoulder.

If the Commanders fall to a rebuilding Bears team, could the Commanders move off Wentz in the long week off? Backup Taylor Heinicke has proved to be competent as a spot-starter, and the Commanders drafted a quarterback in Sam Howell, whom they may want to see what he’s capable of.

The 2022 season has been rough, to say the least, for Justin Fields. Although he’s had his struggles with holding the ball, it’s tough to blame the young quarterback considering his supporting cast.

Going into this season, the Bears were dead last in cash spending and have not done Fields any favors in terms of giving him real help at receiver and offensive line. But maybe the tide is turning. Last week Justin Fields turned in one of his best starts as an NFL quarterback against a decent Vikings defense.

For the first time this season, Justin Fields has topped 200 passing yards.

He threw for 208 yards with 1 TD, no interceptions and a 71.4 completion percentage. Also had 47 rushing yards and a massive TD run called back. Easily his best game of the year. #Bears

Can Fields carry this momentum on a short week? On paper, it is a favorable matchup as the Commanders rank near the bottom in all pass-defense metrics.

Robinson has one of the best stories of this season. After suffering two gunshot wounds to the knee and glute in an attempted carjacking in late August, Robinson only needed one month to make a full recovery. Robinson debuted last week against Tennessee, where he logged nine carries for 22 yards.

Heading into tonight, Robinson’s rushing prop is set at 48.5 yards. To put it nicely, Chicago’s run defense has been porous. They’ve allowed two players to rush for over 130 yards in five games, while Dalvin Cook ran for 94 yards last week, averaging over five yards per carry. Can Robinson take control of this backfield and maximize this juicy matchup tonight?

Is this a “Scary Terry” game?

Terry McLaurin has gotten off to a slow start, but no fault of his own. McLaurin has only registered 19 catches in their first five games, but he does have 326 yards, good for over 17 yards per catch, 8th in the NFL.

McLaurin will likely see a lot of Jaylon Johnson, who is returning from injury. Johnson was a standout on last year’s Bears’ secondary and carried it over into the first two games this season. But after he suffered a quad injury, he missed weeks three through five. The Commanders will be without 2022 1st round selection Jahan Dotson tonight, as well as starting tight end Logan Thomas – could this mean more Terry McLaurin? McLaurin’s receiving prop on FanDuel is set at 54.5 yards. The matchup between McLaurin and Johnson will be one to watch.

Will the Bears continue to lean on Fields’ legs?

Despite his passing woes, Fields has consistently produced on the ground this season.
Fields has rushed for 47 yards or more in three straight contests and had a potential 53-yard TD run called back on a questionable block-in-the-back call in last week’s game.

The one saving grace of Washington’s defense has been their ability to limit the run. Considering how reliant the Bears’ offense is on running the ball and setting up the play-action, could offensive coordinator Luke Getsy continue to use Fields’ legs as a way to open up rushing lanes for David Montgomery and Khalil Herbert? Justin Fields’ rushing prop is at 40.5 yards on FanDuel Sportsbook.

Is the “Under” the play?

To date, unders are 47-33 (59%) this season, and this Thursday Night presents the lowest point total so far.

Per Action Network, since 2020, in games with a point total of 38 or less, unders are 7-1 (87.5%). This matchup presents two struggling offenses, but neither defense has suffocated its opponents.

Should you tail the trend or fade it? These are some things to consider when you use your Bet $5, Get $150 Free offer.

Not wagering on tonight’s NFL action? Bet on something else with FanDuel Sportsbook.