New users at FanDuel Sportsbook can instantly turn $1 into $100 when they bet on college football's lowest FBS total since 1995. 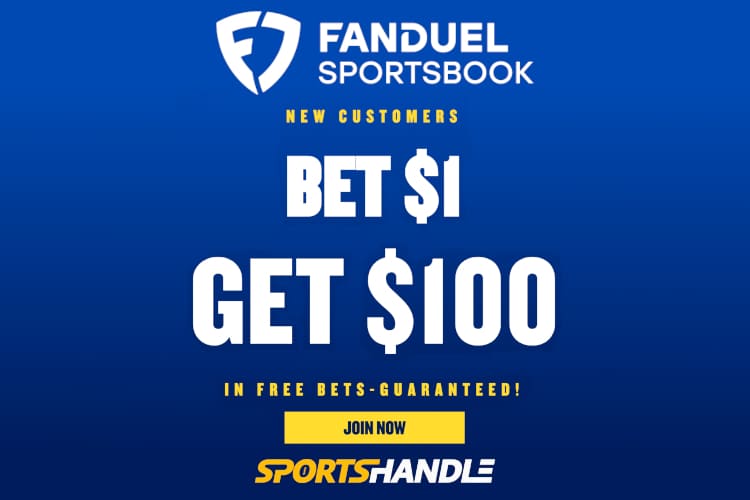 History is setting up to take place on Saturday night in Piscataway, and it isn’t what Rutgers fans and alumni might be expecting. Despite Greg Schiano and his undefeated Scarlet Knights pushing for an upset victory at home over the Iowa Hawkeyes, the biggest story revolving around this matchup is the game’s historic point total.

FanDuel Sportsbook currently has the total for Iowa vs Rutgers set at 33.5 points, which, if that’s where it closes, would be the lowest between FBS teams since 1995. Rather than trying to sweat out this under with less than five touchdowns to spare, new users that sign up with FanDuel Sportsbook using our link can instantly turn $1 into $100 no matter what happens on the field between the Hawkeyes and the Scarlet Knights.

New players that have yet to sign up for an account with FanDuel Sportsbook are in for a serious treat. The site, in partnership with Sports Handle, is currently offering a special, limited time promotion that will instantly turn $1 into $100 regardless of the outcome of your wager!

In order to claim this bonus, new players must follow three simple steps:

Once your initial $1 wager settles, you will receive $100 in the form of free bet credits within 72 hours. Free bets can be wagered in any increment, but must be used within 14 days or they will expire.

Always keep in mind that FanDuel Sportsbook free bets only pay out the winnings, never the stake on any wagers cashed. For example, if a player placed a $20 free bet on a selection at +100 odds and won, they would only get back $20 in winnings. If the same $20 wager was placed and won using real cash, the same player would get their $20 stake back plus the $20 in winnings, totaling $40.

Please note that this promotion is only valid until Sunday, September 25, so act fast if interested!

There is no FanDuel Sportsbook promo code required to claim your offer – just click this link.

Saturday’s Big Ten showdown between the Iowa Hawkeyes (2-1) and Rutgers Scarlet Knights (3-0) will feature a sellout crowd of more than 52,000 rabid fans at SHI Stadium in Piscataway, New Jersey. Rutgers HC Greg Schiano will look to lead his team to their first 4-0 start since 2012, back when the program was still a member of the Big East.

FanDuel Sportsbook currently has Iowa listed as an 8-point favorite in this defense-first matchup, while the home underdog Scarlet Knights are available at a whopping +280 on the moneyline. As mentioned above, the game’s total is set at a historically low 33.5 points over at FanDuel. If that number holds or drops even lower before kickoff, it would close as the lowest between two FBS teams since Arizona vs Oregon State closed at 33 in 1995. For what it’s worth, that game ended with a final score of 14-9 …tread with caution.

Iowa HC Kirk Ferentz and his offensively-challenged Hawkeyes will enter into uncharted waters on Saturday night as they take the field at a sold out SHI Stadium for the first time since Rutgers joined the conference back in 2014. In fact, Iowa has only faced Rutgers twice since the conference expanded, escaping with a 14-7 win in Piscataway back in 2016 before blanking the Knights in Iowa City during Week 2 of the 2019 season, 30-0.

Fast forward to 2022, and Iowa will return to New Jersey facing a matchup similar to their first Big Ten meeting with RU in which they failed to cover a hefty 14.5-point spread on the road. Despite averaging an abysmal 13.7 points per game on offense this season (124th out of 131 FBS teams), Iowa is garnering major respect from oddsmakers as an 8-point favorite. This is likely due to the stellar Hawkeye defense that has allowed a mind-boggling 4.3 opposing points per game (no, that is not a typo) through three contests this season.

Both the game total and spread speak volumes as to how poorly Rutgers is performing on offense at the moment, but completely ignores the fact that Iowa managed to scrape together a lowly 7 points at home against FCS South Dakota State before doing the same against rival Iowa State in a 10-7 loss. Defeating a mediocre Nevada team that lost at home to Incarnate Word the week prior is not enough, at least for me, to buy into Iowa laying any sort of big points away from home.

Online sports betting is legal throughout the state of Iowa.

Rutgers HC Greg Schiano will have his biggest and best opportunity to lock up a signature win since he returned to the program’s helm ahead of the 2020 campaign. It isn’t going to be easy by any means, as the point spread indicates, however many might be overlooking the Scarlet Knights’ talent on defense ahead of the matchup.

The Scarlet Knights will enter Saturday’s contest boasting the 22nd best scoring defense in the nation, affording their competition just 14 points per game. Rutgers is even more dominant when it comes to stopping the run, currently holding opposing offenses to a bleak 39 rushing yards per game – good for 3rd best out of 131 FBS programs. If the Hawkeyes expect to lean on senior QB Spencer Petras and his career-low 48% completion percentage on the season, they could be in for a long night on the banks.

And sure, last weekend’s unsightly 16-14 win over Temple definitely shouldn’t have Rutgers fans feeling particularly giddy about their own offense at the moment, but a win is a win and the team is now carrying an undefeated record into a sold out building during Saturday’s primetime window for the first time since making the herculean jump into one of college football’s most daunting conferences. It’ll be Iowa against the state of New Jersey as a sea of red cheers on their Scarlet Knights in the program’s biggest game in over a decade. If the game’s total hasn’t hinted at it already, expect chaos to ensue.

Bettors in New Jersey unfortunately won’t be able to wager on this game within state lines, however odds are available on various sportsbooks operating in neighboring New York and Pennsylvania.

Too intimidated to place your hard-earned cash on a total this low? No worries! New users can claim FanDuel Sportsbook’s Bet $1, Get $100 welcome bonus by wagering on any sport or event taking place over the weekend. Just remember to sign up using our link and you’ll be on the fast-track to some easy money. Here are some of the events on offer at FanDuel this weekend: