FanDuel Sportsbook is offering a 'No Sweat First Bet' for Thursday Night Football: Colts vs Broncos. 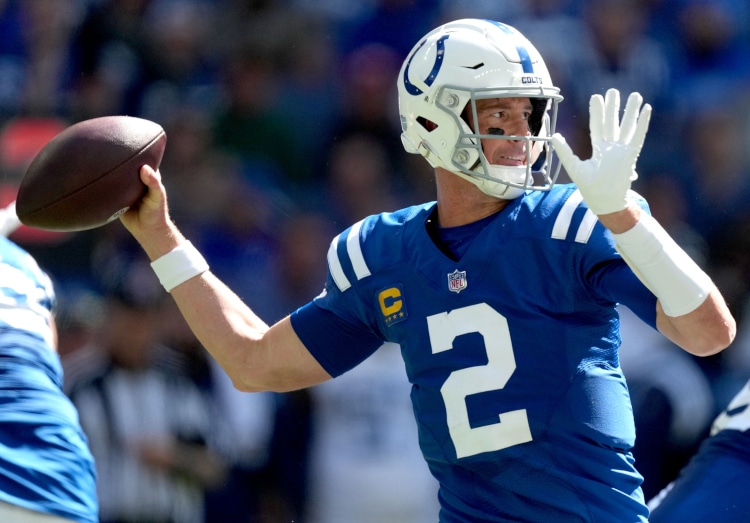 The first game of NFL Week Five kicks off tonight at Mile High Stadium, where the Denver Broncos will take on the Indianapolis Colts. New users on FanDuel Sportsbook can take advantage of their $1K No Sweat First Bet welcome offer for this AFC matchup.

After the first month of the regular season, these have been two of the more disappointing teams in the NFL. Each team had lofty expectations within their division and even presented some potential to surprise in the AFC playoff landscape.

But as it stands, each team is in 3rd place in their respective division and is currently outside the playoff picture. The Broncos and Colts are seeded 11th and 12th, respectively, in the AFC heading into this one.

But as we’ve seen, the season is a marathon, and tonight presents an excellent opportunity for either team to reverse their fortunes.

Below, we will dig into the welcome offer, what you need to know, and how you can ensure you receive your No Sweat Bet. In addition, we will preview tonight’s Thursday Night matchup with plenty of markets you can use your FanDuel welcome bonus offer on.

New players on FanDuel Sportsbook can claim their $1K No Sweat First Bet welcome offer by following the directions below. No promo code is required!

How Users Can Claim Your $1K No Sweat First Bet

Note: You don’t need a FanDuel Sportsbook promo code to use this offer, just click the button below.

The Indianapolis Colts will try to get to .500 tonight against the Denver Broncos. The Colts have lost two times as a favorite, and tied in their opener against Houston, despite laying more than a touchdown against their divisional foe. Their lone win came in week four in a big upset over the Kansas City Chiefs.

The Colts have plenty of talent on both sides of the football, but it just has not come together in the early part of the season. To make matters worse, star running back Jonathan Taylor and linebacker Shaquille Leonard have already been ruled out before tonight’s contest. Frank Reich will turn to Nyheim Hines to carry the load out the backfield. Hines is known more as a receiving threat out of the backfield – you can bet on his rushing (O/U 35.5) or receiving (O/U 29.5) yardage total at FanDuel.

It’s possible the Colts put the game on the shoulders of offseason acquisition Matt Ryan. Ryan has had his fair share of struggles – heading into tonight, Matty Ice leads the NFL in turnovers with eight on the season. If you think it’ll be more of the same for Ryan, you can bet on Ryan to throw an interception at -122 odds.

Wide receiver Michael Pittman Jr. has been a lone bright spot for Indy, but he may be shadowed by one of the game’s best corners in Patrick Surtain Jr. Pittman’s receiving prop on FanDuel is currently set at 64.5 yards. If you think Surtain Jr. can contain Pittman, you may want to bet the over on one of the Colts’ ancillary options: Alec Pierce (O/U 33.5 yards), Mo Alie-Cox (O/U 20.5 yards), or Parris Campbell (O/U 20.5 yards).

On the other side, the Broncos come into this one laying a little more than a field goal against the Indianapolis Colts.

The Broncos were the subject of plenty of offseason press clippings after their busy offseason, where they acquired Russell Wilson and signed Randy Gregory and DJ Jones. The defensive signings have paid off some solid dividends in the early going, but Wilson hasn’t looked like himself in the early going.

Through four games, Wilson only has four touchdown passes. And even more surprising, Russ has only accumulated 51 rushing yards. The allure of Russ has been his ability to run and improvise outside of structure, but with Wilson’s age, we may be seeing a different version of the 9-time Pro-Bowler as a Bronco. If you think Russ gets back to his running ways in this one, you can bet on his over for rushing yards at a measly 12.5.

Wilson will have his work cut out for him as the Broncos lost one of their best players for the season in Javonte Williams. This means Melvin Gordon should be the clear-cut number-one option in this Denver backfield. Gordon’s rushing prop is set at 57.5 yards on FanDuel Sportsbook heading into tonight.

One of the few bright spots for this offense has been wide receiver, Courtland Sutton. Sutton has caught for at least 50 receiving yards in each of their four contests. Heading into tonight, Sutton has the highest receiving prop in this game at 66.5 yards.

If you think the Colts will key in and potentially double up on Sutton on the outside, the Colts have been susceptible to allowing big plays over the middle of the field. The Broncos’ slot receiver, Jerry Jeudy, has his receiving prop set at 52.5 yards.