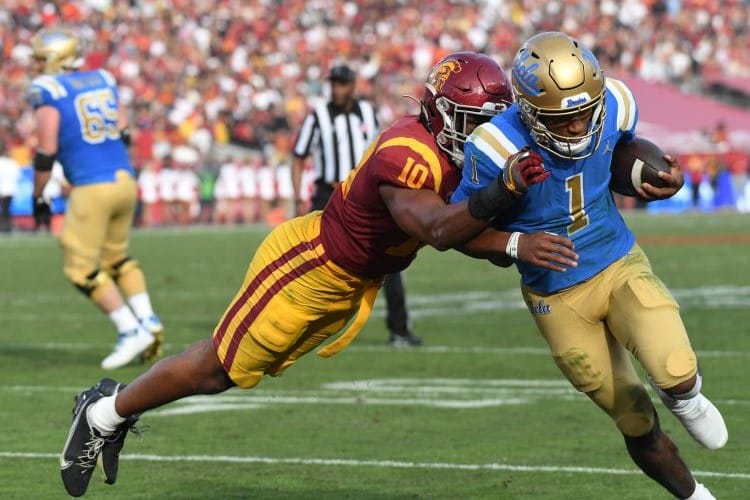 Over the last three decades, there have been few occasions when the storied Victory Bell rivalry between USC and UCLA has been held with the Pac-12 championship on the line.

While the Trojans were a perennial national championship contender in the early-2000s under Pete Carroll, the Bruins have not captured a conference title since 1998. But when the two So Cal rivals square off on Saturday night at the Rose Bowl, both teams are still in contention for a berth in next month’s Pac-12 Championship Game.

Fireworks are expected in Pasadena when a talented USC offense led by Caleb Williams takes on UCLA and signal caller Dorian Thompson-Robinson. With both primed to light up the scoreboard, there is ample opportunity to take advantage of promotional opportunities at FanDuel Sportsbook.

One of the premier U.S. mobile sportsbooks, FanDuel offers a No Sweat First Bet, where customers can claim as much as $1,000 in free bets if their initial bet does not come through. For customers who already have a FanDuel Sportsbook account, the offer is not available. Here is a step-by-step explanation of how to sign up for a No Sweat First Bet offer:

FanDuel’s welcome offer is fairly straightforward — if your first bet wins, the promo ends there. But if your first bet loses, the No Sweat offer will take effect. With an initial loss, FanDuel will match your initial wager and refund you in free bet credits up to $1,000. While your first wager can exceed $1,000, FanDuel will cap free bets at $1,000 under the offer.

Within 24 hours of your first bet settlement, the free wager credits will appear in your account. FanDuel gives you the option of dividing your free wager credits however you’d like. As part of the promotion, FanDuel will only pay out your winnings on a free bet, not the initial stake.

Eligible players must be 21 years or older to play and must be in one of the following states:

Since suffering a crushing 43-42 defeat to Utah on Oct. 15, USC has won three straight including a 55-17 win over Colorado in Week 11. The Trojans, who moved up to No. 7 in this week’s CFP rankings, still have an outside shot at earning a spot in the national semifinals. At a minimum, though, USC must run the table and needs a little help.

The Trojans can remove a hurdle on Saturday with a win over UCLA, an archrival located only 13 miles from the USC campus. Over its last four games, USC has averaged 45.8 points per game, punctuated by last week’s drubbing of the Buffaloes. USC leads the Pac-12 in scoring offense with 42.4 points per contest, 0.2 points more than Oregon. UCLA, meanwhile, ranks third with 39.5 ppg, including a season-high 50 in a win over Arizona State on Nov. 5. As a result, the total of 76 points is one of the highest on the weekend slate nationwide.

What game is your must see this weekend? For @BrentRadlinsky it's USC/UCLA in the Battle for LA! #FightOn Trojans! pic.twitter.com/0fby6fBYUu

The total has eclipsed 70 points in each of USC’s last four games. The Trojans put up 45 in an 8-point victory over Arizona on Oct. 29, then scored 41 a week later in a 6-point win over Cal. USC ranks fourth in the conference in scoring defense (24.4 ppg), as only Washington State, Utah, and Oregon State have allowed fewer points per game. UCLA is next in fifth place, surrendering 26.4 points per contest.

But before you assume the over is a lock, it makes sense to take a closer look beyond the numbers. UCLA failed to score 30 points last week in a 34-28 defeat to Arizona. Two weeks earlier, the Bruins defense arguably put forth its best performance of the season in a 38-13 win over Stanford. While USC’s offense has been prolific all season, the Trojans managed only 17 points on Sept. 24 in a 3-point win over Oregon State.

Williams, the transfer from Oklahoma, ranks second in the Pac-12 in passing efficiency, as well as second in the conference in total offense with 329.3 yards per game. Only Washington quarterback Michael Penix, Jr. has accumulated more yards per contest. Given Williams’ success last year at Oklahoma, he entered the season as one of the leading contenders for the Heisman Trophy. As of Friday, Williams was the fifth choice at FanDuel with odds of +1200.

With QBs like Williams or Mahomes, the play is never over. They have an extended arsenal of tricks from which they can pick. Absurd talent. pic.twitter.com/rSLARtQOKh

Thompson-Robinson is also on many Heisman boards, but he’s more of a longshot. The Bruins’ fifth-year senior ranks third in the conference in passing efficiency and fifth in total offense. Last season, Thompson-Robinson went 16-of-22 for 349 yards and four touchdowns in a 62-33 romp over USC.

Over the summer, both schools signaled intentions to leave the conference for the Big Ten in 2024. This week, the University of California Board of Regents decided to push a vote on UCLA’s move to Dec. 14.

USC will clinch a spot in the Pac-12 Championship Game with a victory. UCLA is still alive for a spot in the title game, but cannot clinch until next week. Both Oregon and Utah enter the week at 6-1 in the conference, one game ahead of UCLA.

No FanDuel Sportsbook promo code is required for the college football betting offer.