New players at FanDuel Sportsbook can claim a No Sweat First Bet up to $1,000 by wagering on Game 1 of the World Series. 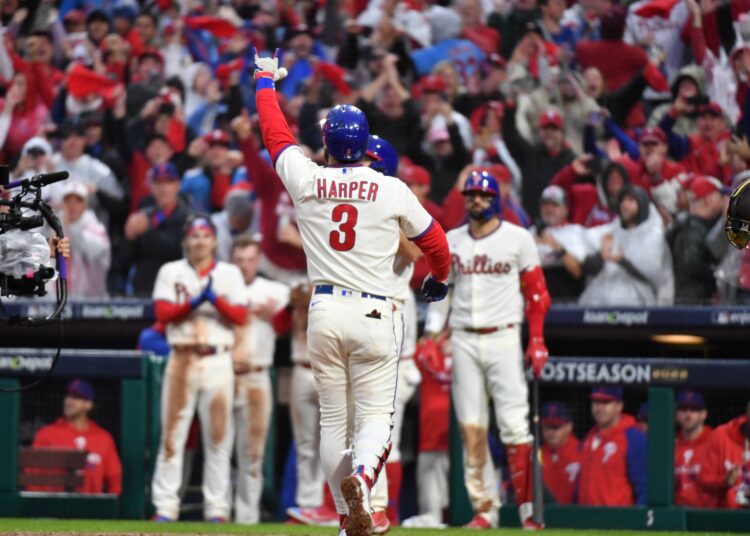 The last series of the 2022 MLB season will kick off tonight when the Philadelphia Phillies play at Minute Maid Park against the Houston Astros in Game 1 of the World Series.

The roads each team took to get here couldn’t be more different: the ‘Stros were the AL betting favorite before the postseason and steamrolled through the competition without suffering a loss. On the other side, the Philadelphia Phillies were the last team to make it in the National League with the longest odds in the NL (+3000) to make it to baseball’s biggest stage.

New users at FanDuel Sportsbook can take advantage of one of the industry’s strongest welcome bonuses – sign up at the big-time sportsbook today, and you can claim a No Sweat First Bet up to $1,000!

In this article, we’ll go over the nitty-gritty details of the welcome bonus and how you can claim your lucrative bonus before (or even after…) the first pitch! Additionally, we will give a betting preview of the matchup between the Phightins and the ‘Stros.

Ensuring your $1K No Sweat First Bet is an easy process. Here’s what you need to do:

So, what does the welcome bonus entail? If your first bet is a winner, your promotion ends there. But if your first bet falls short (it happens!), that is where FanDuel has your back. They will match your stake up to $1,000 in free bet credits – consider it a free bet refund. Free bets will land in your account within 24 hours of your initial bet’s settlement. In addition, your FanDuel Sportsbook free bets will expire 14 days from your issuance – so act swiftly and be sure to use them!

As we said at the top, the paths these teams took to get here was vastly different. Since April, Houston has been one of the best and most complete teams in all of baseball. They’ve made the League Championship Series a staggering six years in a row and have now made three of the last six World Series matchups.

But the last two times Houston has faced an NL East team in the World Series, they’ve come up short. Is the third time the charm?

For Philadelphia, the Phillies boasted the longest playoff drought in the National League at 11 years. It was a win over the Astros that clinched the third Wild Card spot in Philly’s last regular season series of the year, and they haven’t looked back since. The Phillies then steamrolled through the competition, losing only two playoff games on their way to their first pennant since 2009.

At age 39, Justin Verlander has aged like fine wine. He is the current betting odds favorite to take home the AL Cy Young – it would be his fifth.

But despite the dominance throughout his career, Verlander has had his fair share of struggles on the biggest stage. In seven career appearances in the World Series, Verlander has a record of 0-6 with a 5.68 ERA. Verlander will try to put the demons to rest tonight against a red-hot Phillies lineup that features some of the game’s best hitters. If you like Verlander to bounce back and shut down this Philadelphia lineup, you can bet his over (6.5) in strikeouts at +122 odds.

If Verlander continues to stumble, the Houston lineup has plenty of firepower to make up for it. Batters like Yordan Alvarez, Alex Bregman, Kyle Tucker, and even young gun Jeremy Pena have been lethal at the plate throughout the playoffs. Future Hall-of-Famer Jose Altuve is known for his heroics in the postseason but is currently ice cold. During the 2022 postseason, Altuve has a .094 batting average with just three hits in seven games.

If you think Altuve can turn it around and help lead them to victory, you can snag some juicy odds for Altuve to take home the World Series MVP at +1300 odds on FanDuel.

If you’re looking to use your welcome offer to be settled in tonight’s matchup, here are some other player and game props you can consider:

In his three postseason starts, Aaron Nola has a 2-1 record with a 3.12 ERA with 18 strikeouts. However, Nola pitched two shutouts in his first two appearances and is coming off his worst start in a month in their lone loss of the series against San Diego. Nola relinquished six earned runs in just four ⅔ innings, allowing two solo home runs to help jumpstart a comeback by the Padres.

Nola has been a polarizing figure in MLB circles for years but has slowly cemented himself as a bonafide ace. Nola led the MLB starters in fWAR (6.3), posting an incredible 235 strikeouts to just 29 walks. It is the most strikeouts in MLB history for a starter who recorded less than 30 walks.

Nola has given the Phillies a great chance to win each time he takes the mound – you can either take the Phillies on the moneyline with some excellent plus odds (+138) or ride with Nola in the first five innings (+126).

At the plate, Philadelphia’s bats have exploded this postseason. NLCS MVP Bryce Harper has been spectacular, hitting .419 with five home runs, 11 RBIs and 18 hits in just 11 games. Other ancillary hitters like Rhys Hoskins, Kyle Schwarber, and Jean Segura have also come alive in big spots to date.

Harper has the shortest odds to take home the World Series MVP at +550 odds. Here are other Philadelphia player and game props you can wager in tonight’s showdown on FanDuel Sportsbook:

Your FanDuel Sportsbook No Sweat First Bet can be used on any World Series market. No FanDuel promo code is required.