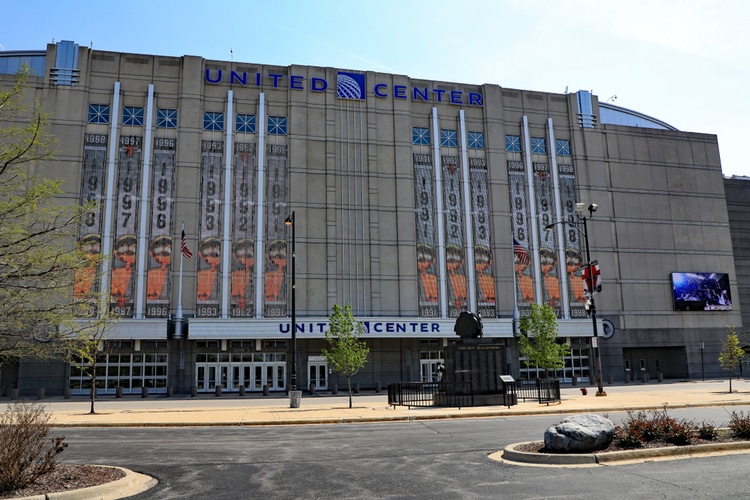 FanDuel is coming to the Madhouse on Madison.

The sports betting titan officially announced Monday it has partnered with the Chicago Bulls and the Chicago Blackhawks in planning to open a sportsbook lounge at the United Center, home of the NBA and NHL franchises.

“Chicago sports fans are some of the most loyal and passionate in the world and plans for our sportsbook lounge inside the United Center reflect their excitement,” said FanDuel Group CEO Amy Howe in a joint statement with the United Center. “Our team has a track record of delivering incredible retail locations for fans, and we can’t wait to make this sportsbook lounge the premier destination for Chicago sports fans and a place where they can fully experience the FanDuel brand.”

The lounge is subject to approval by the Illinois Gaming Board, which issues a sports facility master sports wagering license for venues. The United Center is among five venues in the city eligible to apply for such a license, along with Wintrust Arena, Wrigley Field, Guaranteed Rate Field, and Soldier Field. Wintrust Arena, home to the 2021 WNBA Champion Chicago Sky, became eligible with Gov. Pritzker’s signature on HB 3136, which amended the capacity requirements contained in the 2019 gaming expansion law that legalized sports betting. You can keep up with the site’s future expansion plans by visiting our FanDuel Sportsbook review page.

FanDuel had long been rumored to have interest in creating an in-arena sportsbook lounge at the United Center, with those rumors appearing to be indirectly confirmed during testimony in December when the Chicago City Council contemplated an ordinance to lift the home rule ban on sports wagering. Bulls and Chicago White Sox owner Jerry Reinsdorf offered testimony in support of the ordinance, which passed in mid-December and allowed teams to formally apply for the license.

DraftKings and the Chicago Cubs reached a similar partnership in September 2020, with Cubs owner Tom Ricketts expressing optimism that a two-story, 22,000-square-foot sportsbook lounge will open adjacent to Wrigley Field in time for the start of the 2023 season. Neither party, though, has filed an application for the sports facility sports wagering license per the IGB’s official website.

A two-story set-up inside the arena

The FanDuel Sportsbook at the United Center is to be a two-story venue located adjacent to the United Center atrium. It would “be equipped with state-of-the-art viewing and sports wagering technology, as well as a full-service team ready to deliver a personalized customer experience.”

“As an industry leader in sports betting with a large and loyal existing customer base, FanDuel has a proven track record of innovation and excellence making them the perfect partner in developing the sportsbook at the United Center,” said Howard Pizer, executive vice president and CEO of United Center Joint Venture. “It is designed to give sports fans a brand new, fully immersive sportsbook lounge experience unlike any other.”

Pending license approval from the IGB, FanDuel and the United Center will construct a non-wagering space adjacent to the planned venue that will have FanDuel branding and allow fans to watch live sports action. FanDuel has pre-existing deals with both teams that cover media branding and VIP fan experiences as well as broadcast and in-arena advertising efforts.

No news regarding BetRivers and Soldier Field

The progress both FanDuel and DraftKings have made regarding sportsbooks at pro sports venues is in stark contrast to BetRivers, the state’s other notable mobile sports betting operator and the official sports betting partner of the Chicago Bears. The storied NFL franchise has been frustrated at the lack of movement with the Chicago Park District — which runs Soldier Field — toward creation of a potential sports betting area at the stadium. That was reportedly one reason the franchise signed a $196.2 million purchase agreement with Churchill Downs last September to acquire Arlington Park in the suburbs north of the city.

Chicago Mayor Lori Lightfoot has expressed interest in keeping the Bears in the city, but has taken a hard line publicly regarding the possibility of the team breaking its lease and following through on a move to Arlington Heights. The team’s lease at Soldier Field runs through 2033, though the Chicago Tribune reported it could break the agreement in 2026 for an estimated $84 million.