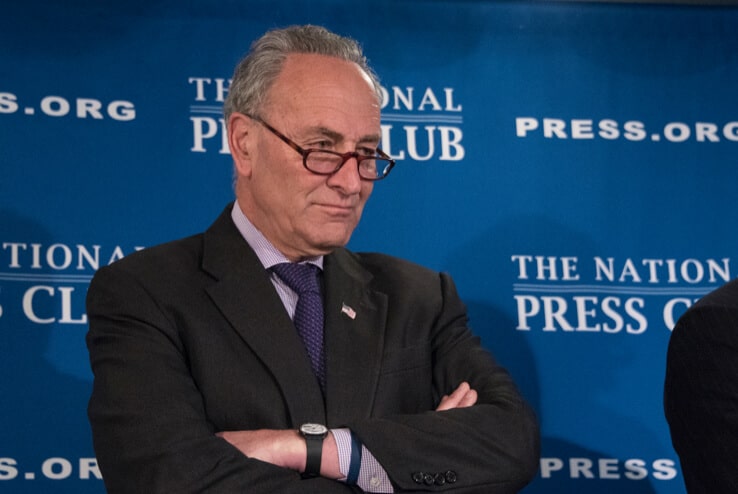 The federal sports betting bill, which has been talked about months, with strong rumors for weeks, would permit states to offer sports betting — a window that was opened by the U.S. Supreme Court’s decision on May 14 to wipe out a prior near total ban — while also intending to ensure minimum national standards.

In a statement, Hatch said that the bill “tackles numerous, complex issues” and includes provisions to protect “the gaming industry, professional and amateur sports leagues, consumer advocates, data providers, law enforcement and many others.”

The NFL — which has been more skittish about sports betting legalization than the other major American sports leagues — on Wednesday endorsed the bill, with a spokesman saying, “To protect consumers and the integrity of our games, we urge the swift enactment of The Sports Wagering Market Integrity Act of 2018.”

A spokesman for the NCAA, which also has shown resistance to betting on college sports, said in a statement that “we applaud the bipartisan support of Senators Hatch and Schumer in proposing the federal sports wagering legislation.”

What a difference two years make

One item in the bill jumps out as different from the widely circulated draft of the bill from two weeks ago: Sports betting operators would have to “use data provided or licensed by sports organizations to determine the outcome of sports wagers through 2024.” That end date was 2022 in the draft.

The leagues’ profit from signing data deals with more and more sports betting operators seems to suggest that will be a revenue stream to replace the failed efforts to receive “integrity fees” in any of the states that have legalized sports betting so far. This bill — should it unexpectedly be made law next year — would ensure that stream.

And after 2024? That’s a bit murky: Operators can opt to partner with data companies found to provide “data of substantially similar speed, accuracy, and consistency” compared to the league’s data. Such partners would have to be “expressly authorized to provide such data to sports wagering operators.”

Acknowledgment of the black market

Interestingly, the bill references the American Gaming Association’s estimate of $150 billion in annual illegal sports betting, compared to less than $5 billion in legal bets in Nevada in 2017. Some opposition to state regulation of sports betting at times has seemed to imply that sports betting wasn’t already rampant in the U.S.

A key additional comment from Hatch today: “There is much work to be done, but I hope this bill will serve as a placeholder for the next Congress, should they decide to continue working to address these issues.”

Schumer said that he “will strongly advocate for this bill to move forward.” But his problem is that not only is he in the minority party in the Senate, but Hatch is retiring. Hatch was one of the sponsors of the Professional and Amateur Sports Protection Act of 1992 that was ruled by the Supreme Court to be unconstitutional “commandeering” of most states to do Congress’ bidding.

Looking on the bright side

In addition to the widespread opinion that the bill faces many obstacles to advancing, it’s important to note that this is hardly the worst possible bill for the legal sports betting industry that could be advanced.

Two overlooked aspects that were universally agreed upon during the six-year legal battle of New Jersey vs. the NCAA and four professional sports leagues were 1) that New Jersey could entirely eliminate its gambling prohibitions and not run afoul of PASPA and 2) that Congress has the power to ban sports betting in the U.S.

[Also See: The Power 15: Ranking States In Order Of Their Odds Of Legalizing Sports Betting In 2019]

New Jersey won its case not because of limitations on what Congress can do, but because of how PASPA forced the states into ensuring its wishes were obeyed.

Still, while proponents of legal sports betting would certainly be happier with this bill than with a federal ban, there remains opposition to Hatch and Schumer’s proposed legislation.

“Since the Supreme Court’s ruling in May, the American Gaming Association has consistently maintained that federal legislation regarding sports betting is not necessary,” said Chris Cylke, AGA’s vice president of government relations. “That underlying position remains unchanged. At the same time, we remain committed to maintaining an open and constructive dialogue with policymakers considering sports betting legislation at any level of government.”

Setting reasonable minimum federal standards for states to regulate their sports betting might be superfluous, but most of the provisions set out here don’t seem onerous: minimum age of 21, self-exclusion lists, no betting on amateur sports outside of college and the Olympics, and so on.

An interesting wrinkle, which remains unchanged from the previous draft, is the establishment of a “National Sports Wagering Clearinghouse” that would collect anonymized data in real time with the goal of detecting suspicious transactions.

At various gaming industry events this year, such a concept seemed to stump some operators. Preventing match fixing and other fraud is a universally desired goal (outside of the cheaters), but how to implement it safely and efficiently seems to be something for tech experts to figure out.

Finally, there remains in the bill a clause that denies operators a license if “on or after October 13, 2006,” a company took an illegal internet wager. That, as all online poker players know, was the day that President George W. Bush signed into law the Unlawful Internet Gambling Enforcement Act (UIGEA). This clause seems to threaten PokerStars, whose sports betting arm BetStars is currently active in New Jersey.