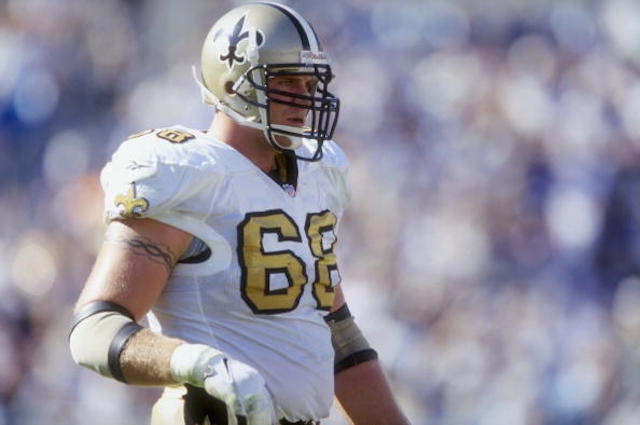 Las Vegas oddsmakers dub teams underdogs or favorites, sometimes by a large margin. Are the players aware? Do they talk about point spreads? Do spreads become bulletin board material or is it completely out of mind? SportsHandle wondered, and so we asked former NFL players about sports betting and what they recall. This interview is the first in a five-part series.

Kyle Turley (@kyleturley) earned two nods as a First-team All-Pro offensive tackle and played for the Saints, Rams and Chiefs from 1998-2007. These days he lives in California where he coaches football and advocates for medicinal marijuana for NFL players, and against excessive prescription of painkillers. He also sings and plays guitar Kyle Turley Band, which has released three albums.

Ever Wonder If NFL Players Hear About or Talk About Point Spreads or Vegas Lines? We Asked 5 Former Pros

SportsHandle: Are some players, or many players, aware of the point spread of the upcoming games they’re playing?

Kyle Turley:  Yeah, I mean, they always talk about the over, the under in the locker room, sure. It’s just locker room banter, we’re favored or we’re not. This is how many points we’re favored by. And ironically, it was always, thinking about it now, we never thought about that as players. It was always somebody in management that would bring it up to us. That’s kind of funny.

SH:  Somebody in the front office or one of the coaches?

KT: I just remember it being brought up here and there. Thinking about it more as we’re talking here, I’m thinking, “Who would ever bring that up?” And it was always brought up by somebody in management. I always kind of figured it was people reading the paper and just saying, “We’re underdogs,” or “We’re favored,” or “The point spread is this, the point spread is that.” As players, you don’t ever care. You’re just, “Whatever, I gotta go to work.”

SH: Suppose your team covered the spread. Would that ever become a topic of conversation?

KT:  Again, now that you’re asking me all this stuff, it’s coming back to me that it was… somebody in management was always the one to bring that up. Players don’t read the papers, for the most part. Coaches bring that shit up for locker room fodder. And they always brought up the point spread. I never cared about it, nor does it matter at all to us as players, because unless you’re gambling, it doesn’t matter. It’s the NFL. At any moment, anybody can win the game and that point spread could be obliterated.

KT: Oh, yeah, bulletin board material, for sure. “We’re favored,” it always mentioned it like that, yeah. “Just so you guys know, they got you guys a seven point underdog,” or something like that, yeah.

SH: So if it were the reverse, if you guys were a 7 or 10 point favorite, would they point it out to maybe not let you get overconfident?

KT: No, I don’t know. But it was always mentioned. “We’re favored,” or probably brought up at times, “Hey, we should win this game. We’re favored.” I can’t say one way or the other if it was intentional to get us to understand the point spread, or more than it was just to say, “Hey, guys, you’re not being valued,” or “You’re valued higher and you guys should win,” or “You’re not being valued enough and you should kick their ass because of that.”

SH: So say you guys were a big underdog and maybe you felt it wasn’t warranted, would you feel disrespected, a little bit?

KT: Of course. That’s the way it would be taken or presented, rather, yeah.

SH:  This is all interesting to me and our readers, because the NFL tries to pretend that gambling isn’t important to the game’s financial success, when it really is.

KT: The number one sponsor is DraftKings.

SH: Right. And there’s owners invested there, and now the Raiders are moving to Las Vegas. I think they’re coming closer to publicly embracing it with the Supreme Court case and change maybe coming, and statements they’ve made.

KT:  Yeah, they’ve got a lot of history with gambling, and they’ve got a lot of connections to old mob money. All these owners are old money. And they’re involved in all these other industries. And I guarantee you, with the concussion settlement and all the money they’re gonna be losing here, they’re finding every way possible to keep their profit margins high.

SH: As far as the odds, do you think the oddsmakers were (or are) pretty accurate in their handicapping?

KT:  They usually are, ironically. It’s usually pretty close for the most part, as I remember. We either covered the spread or it was pretty close to not being the case. Again, I never really got into it, and I never gamble. I don’t do fantasy football. I don’t pay attention to any of that. I just root for good football playing. So I’ll be rooting for one team, and I’ll see a great play and be rooting for that team. I’m totally confusing to everybody.

SH:  Speaking of fantasy, did coaches, owners, anyone in the front office have any rules about players participating in fantasy leagues?

SH:  The daily fantasy, no, but I think the regular fantasy, yes. But to a lesser extent.

KT:  I never got into that stuff enough to really comment much on fantasy football, other than that it has bastardized the game and created more opportunity for what you’re calling about. And that’s major distractions, as to what is likely, really taking place. I mean, there’s a lot of questionable calls that I’m sitting on my couch and you are, as well, going, “How did they not see that?” And I’ve been told by multiple sources that, “Just pay attention to the guy in the white hat. He’s the only one with the earpiece in. And his decision is made, not necessarily, by his eyes.”

KT: I think it’s a concerted effort on behalf of the NFL, that when they have the opportunity, they let the game play, but when they have the opportunity, in my opinion, I’ve personally witnessed the game go in the favor of the direction it shouldn’t go. And then, those things afterward, seem to have quite significant attachments to why certain teams have gotten to the Super Bowl. I mean, there’s so many games, and every team has had these situations happen. So, I don’t think that anybody can deny that we got robbed in one game or the other, because it happens.

Come back throughout the week for conversations with Chris Cooley, Mike Pritchard, Blaine Bishop and Hugh Millen.