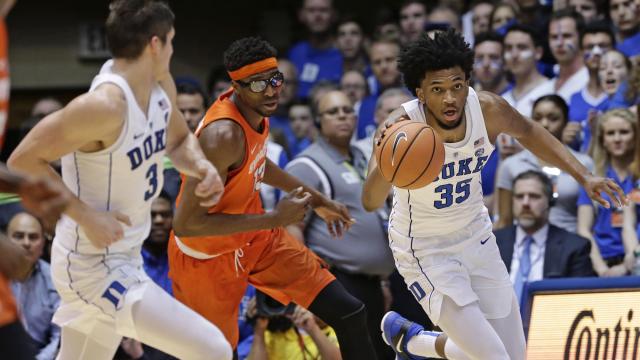 How crazy were the first two rounds of this NCAA Tournament? The average seed of this year’s Sweet 16 teams is 5.31, tied for the 4th-lowest since seeding began in 1979. In the four other tournaments when the Sweet 16 seed average was at least that low, a 1 or 2 seed won it all.

Although in the wacky South Region after Thursday night, only No. 11-seed Loyola Chicago and No. 9-seed Kansas State were left standing, the cream does tend to rise to the crop at the end. And that’s my theme for the top two picks of Friday’s Sweet 16 action.

🎥: ‘Cats met with the media yesterday ahead of Friday’s SWEET 16 Matchup with WVU. #LetsMarchNova #MarchMadness pic.twitter.com/xKKBYmQHt3

East Region opener Friday from Boston with the winner facing either No. 2 Purdue or No. 3 Texas Tech; that’s the only chalk matchup of the Sweet 16 and the East was the lone region to go almost completely to form, with only No. 4 Wichita State missing. The Shockers were sizable Round 1 favorites over Marshall but upset by the Thundering Herd. Marshall seemed to have blown its you know what in that one, though, getting crushed by state-rival WVU 94-71 in the Round of 32.

There are a few reasons why I will be taking Villanova here.

First, the Wildcats will have the sizable fan support, just as they did the first two rounds in Pittsburgh, as Boston is a short flight or nice train ride away from Philadelphia. Second, there’s no doubt the “Press Virginia” defense that Bob Huggins employs can be overwhelming at times. The Mountaineers force 16.5 turnovers per game, No. 1 among NCAA Tournament teams. Murray State and Marshall both turned it over on nearly 25 percent of their possessions. But, if you have had all week to prepare for it, then it can be handled. Marshall had to face WVU on a quick turnaround. Villanova doesn’t.

Third, the Wildcats have the nation’s best offense, a bevy of ball-handlers and they commit just 10.4 turnovers per game, 14th-best in the country. They have turned it over more than 20 percent of their possessions in just two games the past two months. Not to mention, Nova is the nation’s highest-scoring team and shoots better than 50 percent from the field.

Villanova has been a great bet all season with a 24-12 ATS mark that’s tops in the country. West Virginia has been underdog three times this season, going 2-1 ATS: (L vs. at Kansas, W at Oklahoma and Texas Tech). For what it’s worth, West Virginia has covered just three of its past 11 following an ATS win. The Wildcats, meanwhile, are 8-1 ATS in their past 12 neutral-site games.

[Listen: Todd Fuhrman Breaks Down Every Sweet 16 Game on ‘The Hedge’]

Midwest Region nightcap from Omaha with the winner facing either No. 5 Clemson or No. 1 Kansas – should the Tigers win, the ACC then would be guaranteed at least one school in the Final Four. However, I expect the Jayhawks to prevail.

Perhaps we shouldn’t be surprised that Syracuse is here. This year’s Orange had no right getting an at-large bid, but neither did the 2015-16 team that closed the regular season losing five of its final six. Yet like this year, SU was the last team in — and the 2016 Orange made it all the way to the Final Four. Incidentally, a team seeded 7th or lower has reached the Final Four in each of the past five NCAA Tournaments. We had six of them when this Sweet 16 began.

Jim Boeheim’s 2-3 zone is a gimmick sort of like the Wildcat formation in football or an overshift in baseball. But, it surely does work. The Orange have employed the zone against 94 percent of their opponents’ possessions this season, the highest rate among Division I teams.

It really, really works when the Orange are facing a team on a short turnaround, much like WVU’s press. Michigan State was clearly not ready for it last weekend, as the Spartans got way too 3-point-happy, chucking up 37 of them and making eight. Syracuse’s three opponents in this Big Dance (remember, it played in the First Four) are averaging just 54 points on 34 percent shooting.

The problem for Syracuse is that Duke coach Mike Krzyzewski knows the 2-3 zone probably better than anyone other than Boeheim. The two are great friends, and Coach K had Boeheim on his U.S. Olympic staff. Plus, there’s the fact they play every year in the ACC – Duke is 4-3 vs. the Orange since they joined the conference. That includes a 60-44 win in Durham on Feb. 5. That was right when Coach K shifted his team to a zone as well. The result: The Orange were 6-for-25 from deep and the Blue Devils 2-for-18. It was an unusual game for Duke as it has made 42 percent of its three-point jumpers against the zone this season.

In their three wins in this tournament, the Orange shot 37.8 percent from the floor. Duke’s offense is vastly better than Michigan State’s. SU is also way too reliant on its Big 3 of Tyus Battle, Oshae Brissett and Frank Howard. Each averages more than 38 minutes per game – no one else more than 28. If one gets into foul trouble or injured, this will be a complete rout. Howard did foul out vs. MSU, but the Spartans weren’t as equipped to make Syracuse play as Duke is.

I generally take this many points … but not here. The Orange are just 6-13 ATS in their past 19 after a cover.