Sights, sounds and reporting from one of the world's largest gaming conferences 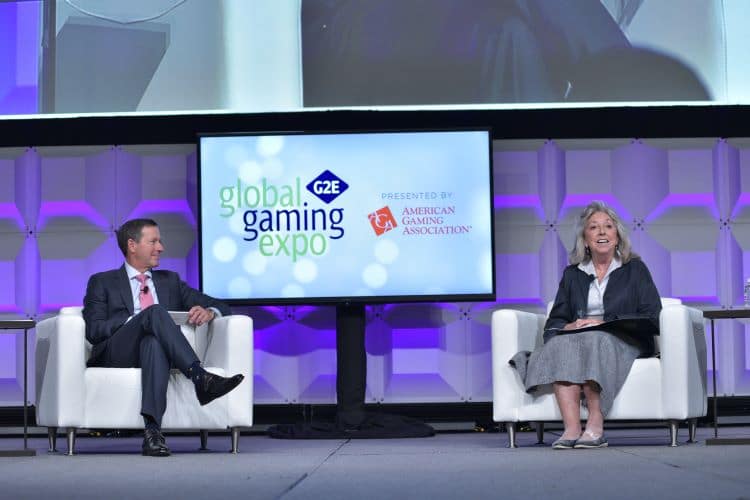 Forced to migrate onto a virtual platform in 2020 due to COVID-19, G2E is back on the Las Vegas Strip this week for four days of networking, keynote presentations, and hobnobbing.

Each year, the American Gaming Association’s Global Gaming Expo, more commonly known as G2E, brings together the top industry stakeholders throughout the world. This year, attendance at the popular conference is limited somewhat by restrictions that prevent some foreign executives from traveling to the U.S. Since the historic PASPA decision in 2018, sports betting has played an integral role in the prominent expo, with appearances from top C-level executives, regulators, and analysts, among others.

On Wednesday, Arizona Cardinals owner Michael Bidwill was to take part in a keynote conversation with Bill Miller, who serves as president and CEO of the AGA. Arizona, a newcomer to the U.S. sports betting market, launched legalized sports wagering last month just before the start of the NFL regular season. The Cardinals, who secured a partnership with BetMGM in August, have plans to launch a retail sportsbook in State Farm Stadium at some point during the 2022 NFL season.

As the NFL continues to gradually ease restrictions on sports betting for its 32 clubs, the league’s push to monetize sports betting will be a key topic at the conference. Next spring, Las Vegas will host the NFL Draft, two years after the league canceled the much-ballyhooed event planned on the Strip at the height of the global pandemic.

The draft may serve as a trial balloon for the city’s ability to eventually host a Super Bowl. For decades, a Super Bowl in Sin City was considered next to impossible, as league brass led by former NFL Commissioner Paul Tagliabue sought to keep the NFL a healthy distance from the mecca of sports betting. But, now, legal sports wagering is live in nearly a dozen cities with NFL franchises, providing the league with another channel to engage with fans.

Throughout G2E, Sports Handle will provide updates on top panels, exhibits, and the latest gambling innovations on display at the conference.

“A year ago today, this hall was empty,” Miller said Tuesday inside the Venetian Expo in Las Vegas. “One year later, we’ve come roaring back with the best results in our industry’s history.”

Can a casino patron sit at a bar and bet on sports? Within the next few months, the answer will be a resounding yes, according to Nick Khin, chief operating officer at IGT.

IGT, a top casino B2B supplier, is about to launch CrystalFlex, an omni-channel product that allows gamblers to play video poker, keno, slots, and bet on sports all on one platform. IGT has constructed a bar top product that enables customers to place on-screen sports bets from their seat at a noisy bar. Another incarnation of CrystalFlex contains the same gaming offerings on a kiosk located inside a sportsbook, or any other popular area inside a casino.

The product could be valuable for casinos that are looking to introduce new offerings to first-time sports bettors, Khin explained. Quite often, these customers may feel anxious about placing a sports at a counter with a teller. The kiosks and bar tops give the customers more privacy while following their favorite teams.

“People who are not used to sports betting or are new to sports betting, they’re a little afraid of embarrassing themselves,” Khin said. “Whereas, if you actually sit here, no one is watching you – you have your own private space, and you can play around with it.”

One panel on Wednesday afternoon delved into issues related to the challenges posed by the legalization of sports betting on the integrity of college athletics. Panelist members included representatives from the FBI, FanDuel, Sportradar, and the NCAA. The NCAA was represented by administrator Jim Brown, not to be confused with the legendary Hall of Fame running back.

Said Brown of the NCAA’s longtime slogan of “Don’t Bet On it” –  well, don’t bet on that slogan lasting much longer.

“I think we’re going to move in a different direction,” Brown said Wednesday during a panel on combating collegiate sports scandals in a world of increasingly-pervasive marketing of legal sports betting. Brown serves as the managing director of the NCAA’s Enterprise Risk Management division.

Brown said the point of the phrase sometimes is misunderstood – not surprisingly, perhaps, when Colorado and LSU have reached official partnerships with gambling operators, and with more such deals undoubtedly on the horizon.

A jam-packed schedule Tuesday opened with a keynote presentation from Miller, who has served as president of the AGA since December 2018.

“We are thrilled to be back here live in Las Vegas,” Miller said. “There’s nothing like getting back together in person. While we’ve adapted our business over the last 18 months, being here is a hell of a lot better than being on a Zoom call.”

This summer, the Washington Football Team became the first NFL franchise to join the AGA’s responsible gaming program. The initiative, titled “Have a Game Plan. Bet Responsibly,” provides bettors with a multi-prong approach for keeping their sports betting habits in check.

“We have deepened our commitment to responsible gaming,” Miller added. “Our responsible marketing coda for sports wagering set an industry-wide standard that has influenced leagues, operators, and media companies.”

Miller’s comments come at a time when activity from global sportsbook operators has been increasingly dissected by responsible gaming advocates. UK regulators are moving closer to prohibiting sports betting patches on soccer jerseys in a move that is expected to deeply impact sponsorship trends in the English Premier League.

“As sports betting grows, so does our responsibility. Scrutiny from state regulators and the media is increasing around advertising saturation and aggressive promotions. And we have to get this right because we’ve seen what happens when it goes wrong,” Miller noted. “We need to ensure that our actions reflect those commitments if we want to build a sustainable marketplace for sports betting.”

As the Brooklyn Nets approach the opening of the NBA regular-season later this month, team management is still uncertain on Kyrie Irving’s status for home games at Barclays Center.

Given Irving’s reluctance to become fully vaccinated, the Nets are preparing for playing home games without the All-Star guard for the relative near future, ESPN reported Tuesday. One prominent sportsbook, Bally Bet, is also not certain on how Irving’s status will impact the team’s season-win total for the upcoming season.

While Bally Bet has yet to post season-win totals on the online sportsbook’s website, the book lists the Nets as the definitive 2/1 favorite to win the 2022 NBA Championship. The Nets are also even money favorites to win the Eastern Conference, far ahead of the Bucks, the second choice at +350. The two teams are the only clubs in the East with odds below 9/1.

Since it is challenging to predict whether Irving will get vaccinated, it’s hard to put much stock in how the guard’s potential absence in Brooklyn will influence the Nets’ season-win total, said Jay Rood, senior vice president of risk and trading at Bally’s Interactive.

“The closer to the season we release those, the more solidified the information should be,” Rood told Sports Handle.

"If things change then – if there's a resolution, we're here for him," says Nets coach Steve Nash of Kyrie Irving, who’s set to miss home games if he remains unvaccinated. #NBA https://t.co/YTflKeL90T

Irving must be vaccinated for COVID-19 to appear in practice and games located in New York, according to local governmental mandates.

Typically, Rood will leave season-win totals on the board for the first 10-12 games of an NBA regular season, he added. Rood drew parallels with the uncertainty related to Irving’s vaccine status to a player who is dealing with a nagging ankle sprain. As a result, Bally’s linemakers will approach the scenario the same way whether it is “Covid or an injury,” he said.

There are odds of 40/1 on Irving to win NBA Most Valuable Player at Bally’s. Another top book, FanDuel Sportsbook, lists the Nets’ season-win total at 56.5 victories.

On Monday, DraftKings announced plans to construct a new office in Las Vegas, where the company eventually expects to have an expanded team of more than 1,000 employees.

The company’s 90,000-square-foot technology hub is set to open in southwest Las Vegas in early 2022, DraftKings said in a statement. The office will be located inside a property at UnCommons, a 40-acre mixed-use community owned by Matter Real Estate Group, a San Diego-based developer.

“Our new office space and Las Vegas expansion further exemplifies DraftKings’ investment in its employees and the future of the company, as well as the local community,” said Matt Kalish, DraftKings co-founder and president, North America. “Our goal is to create another world-class workplace environment that will foster DraftKings’ innovation, further bolster our local presence, and deepen community involvement. With these lofty aspirations, we were thrilled to discover that UnCommons mirrors these high standards.”

Before COVID-19 became widespread across the U.S., DraftKings opened an office adjacent to the Strip in January 2020. The office, which employs more than 100 employees, is located within walking distance of the Las Vegas Raiders’ home venue, Allegiant Stadium.

It is still unclear if DraftKings is considering applying for a sports betting license in Nevada. Such a move would disrupt the traditional model for sports betting in Las Vegas, one that has historically been limited to retail and mobile wagering through casino operators. The licensing process is time-consuming, which is one reason DraftKings has yet to announce whether it plans to expand into the state. In March, DraftKings entered into a definitive agreement to acquire Vegas Sports Information Network (VSiN) in a deal worth about $100 million.

Adam Wexler, founder and CEO of Prize Picks, told a G2E audience on Monday that eSports has become such an integral part of its business that plans are afoot to launch a second site specifically for such games.

Wexler said that second site, which would closely resemble the original site, will solve the issue of users looking to play, only to struggle to find the eSports section. He added that his company is generating more revenue from eSports than any other operator, with an average player age of 32 — far older than is generally perceived by the industry.

“The table game that skews the youngest is roulette — a game with no skill,” Levine told a G2E audience Monday, adding that it would be “arrogant,” after 5,000 years or more of such gambling, to assume that one particular generation suddenly would come along and reverse the trend.