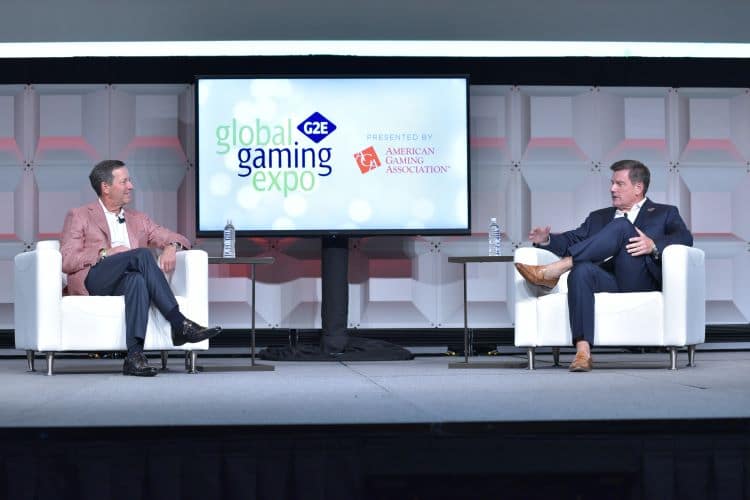 Last week, thousands of gaming stakeholders visited Las Vegas for the Global Gaming Expo (G2E), which returned to Sin City after a one-year hiatus due to COVID-19.

Strict mandates on foreign travel related to COVID prevented droves of attendees from making the jaunt to Vegas. While more than 13,000 participants attended the expo, according to G2E organizers, that total is less than half of attendance in 2019, when 27,000 participants roamed the halls of the Venetian Expo on the Las Vegas Strip. Inside the massive exhibition hall, there were wide swaths of empty space in areas typically occupied by gaming booths. Still, the 13,000 figure should be considered an accomplishment for organizers of G2E, given the travel restrictions put in place by many foreign nations.

As anticipated, DraftKings’ proposed $22 billion acquisition of U.K.-based Entain dominated conversation in the sports betting dealmaking space. If consummated, the deal would become the largest online gaming transaction on record. It also has the potential to transform the global sports betting market through 2025 — and beyond.

Shortly after the Supreme Court’s historic PASPA ruling in 2018, MGM Resorts and Entain formed a 50-50 joint venture that features a comprehensive online sports betting and iGaming platform. That venture, BetMGM, is competing with DraftKings and FanDuel as the three leaders in the intensely competitive race for U.S. sports betting market share.

By acquiring Entain, DraftKings would fulfill the dual objective of expanding its scope beyond U.S. borders while weakening a top competitor. But language in MGM Resorts’ agreement with Entain gives the former the consent to approve or deny any deal involving BetMGM. As a result, MGM Resorts CEO Bill Hornbuckle cautioned last week at a G2E panel that if the deal goes through, his company could attempt to block DraftKings from conducting business in the U.S.

Will @DKSportsbook be able to operate in the U.S. if it acquires @EntainGroup? Only if @MGMResortsIntl says so, says the company's CEO. #G2E2021 #g2e https://t.co/rrGf0fpw3F @US_Bets @BetMGM @WynnLasVegas @WynnBET

DraftKings must announce if it intends to make a formal offer for Entain by Oct. 19, according to U.K. mergers and takeover law. The high-stakes battle was one of several pertinent sports betting topics on the minds of stakeholders last week at one of the world’s largest gaming conferences.

Lloyd Danzig, founder and managing partner of Sharp Alpha Advisors, views the bid in some ways as a “defensive deal” by DraftKings with the purpose of depriving some of its competitors of the core technology they require to remain competitive in the U.S. sports betting space.

“It makes sense to me that DraftKings is looking to both bolster their competitive position and also ensure that some of their closest competitors don’t have access to the same vertical integration and tech stack that they feel they’ll need to be a market leader,” Danzig told Sports Handle on the G2E show floor.

Beyond the proposal, Danzig expects to see more deals with a “defensive component,” as the sports betting industry continues to show signs of immense consolidation. On Wednesday, shareholders of Toronto-based theScore voted to approve a $2 billion acquisition of the company by Penn National Gaming. One noteworthy aspect of the deal is that Penn National purchased theScore in part to gain access to the latter’s player account management (PAM) system, which isn’t even completed yet, Danzig explained. Furthermore, the acquisition appears to be motivated by a business-to-business (B2B) technology interest, even though theScore is a business-to-consumer (B2C) company, he emphasized.

In the days leading up to the expo, Endeavor made waves by signing a definitive business agreement to acquire sports betting division OpenBet from Scientific Games for $1.2 billion. The recent flurry of deal activity, specifically with transactions involving B2B companies, will likely result in a higher valuation or premium for operators that control a higher percentage of their tech stacks, Danzig added.

“The fact is that consolidation plus a very small number of powerful suppliers can result in an influx of defensive dealing,” he said.

One development Danzig has noticed over the last six to 12 months is that a larger portion of institutional investors, private equity funds, venture capitalists, and hedge funds are coming to believe that the total addressable market in sports betting is far greater than just the aggregate of gross gaming revenue across operators. Danzig points to initiatives such as DraftKings’ themed sports bars and Barstool Sports’ frozen pizzas as creative ideas from sports betting-focused companies to grow their brands beyond betting itself.

The U.S. legal sports betting market is expected to grow to nearly $40 billion in annual revenue by 2033, according to Goldman Sachs. At one after-hours Vegas party, there was chatter that the $22 billion proposal for Entain could in fact be viewed “as a steal” a decade from now, a director from a private equity firm told Sports Handle.

Will ESPN get into the sports betting game?

In August, the Wall Street Journal turned heads with a Friday afternoon report that ESPN had held discussions with two prominent sportsbooks on the prospect of licensing its brand to a major commercial sports betting operator. The Worldwide Leader In Sports, according to the WSJ, held talks over the summer with DraftKings and Caesars Entertainment on a deal to license its brand in the neighborhood of $3 billion. While the potential transaction has long been expected in sports betting circles, such a move would largely be viewed as a game changer for the industry, given ESPN’s branding power.

Although the $3 billion price tag may be considered a shockingly high number at first, the figure may make more sense when you drill down further into the details, according to industry experts at the conference. Much like the NFL, ESPN is proceeding cautiously with its interest in sports betting, says Rob Phythian, who serves as CEO of Sharplink, a Minnesota-based sports tech startup. Over the next several years, Phythian expects the NFL to develop an on-screen betting platform with video of live game action.

Phythian said ESPN is spending a good deal of time determining how to package its sports betting “asset,” which he described as the network’s “audience and reach.” Last month, Monday Night Football offered a second-screen, betting-focused alternative broadcast for the program’s season debut, following a successful trial run during the AFC wild card round.

A question that ESPN may grapple with as it considers a move into the sports betting space is whether to participate in the lifetime value (LTV) of the sports betting customer or to outsource sportsbook operations to a major book for guaranteed money, Phythian explained.

“ESPN falls into the same category as the NFL. They are being careful — they are doing their homework during this rollout phase,” Phythian told Sports Handle.

While Disney CEO Bob Chapek noted last month that ESPN is about to become “aggressive” in its strategy to take a more active role in sports betting, he didn’t comment specifically on plans to license its sportsbook brand. Disney, the parent company of ESPN, joined forces with the Seminole Indian Tribe in 2018 to spend $31 million combined in an effort to pass Amendment 3, a ballot initiative that subjects any proposed gaming expansion in Florida to voter approval. For his part, Seminole Gaming CEO Jim Allen remarked at the conference that a sportsbook operator could benefit from the value proposition attained through ESPN’s universally recognized brand.

At the Goldman Sachs Communacopia Conference today, Disney's CEO Bob Chapek described sports betting as "definitely a place where we want to be." Very big shift from Bob Iger's tone, who stated just two years ago that the company would not facilitate gambling in any way.$DIS

A host of sports betting tech firms also exhibited a strong presence at the expo. One company, Ontario-based Quarter 4, an artificial intelligence-driven predictive sports analytics provider, uses sports data plus weather, stadium, and historical performance data to produce more than 2 million pre-game predictions and in-game forecasts per day. Complex data sets from Quarter 4 can produce data for in-game play within mere seconds of the completion of live action on the field, according to Quarter 4 CEO Kelly Brooks.

“We’re so ahead of the industry right now, you can’t bet that fast,” Brooks told Sports Handle. “For us, how do we take that content and drive that through to another suitor? Is that streaming TV? Is that something different?”

The models are granular enough to predict a receiver’s yardage total, overall receptions, and longest catch made during the course of a game. Over the first month of the season, Quarter 4’s NFL models reported accuracy of 69%, Brooks said, topping its goal of 64%. For college football, the accuracy for Quarter 4’s models are closer to 76%, she said, since its historical sets for the sport go back as much as seven years — a longer time horizon than the NFL.

Elsewhere, a panel at the expo delved into ways stakeholders can uphold the integrity of college sports against the backdrop of the nationwide expansion of legal sports betting. The NCAA is entering new territory after the organization announced new name, image, and likeness (NIL) rules that will allow college athletes to receive compensation from advertisers.

The panel included appearances by representatives from the NCAA, FBI, and FanDuel. Last month, MaximBet announced a promotion in which the company will pay female student athletes $500 for promoting the company on a variety of social media websites under a four-month commitment. FanDuel has yet to sign a sponsorship agreement with a college athlete, said Alex Smith, a director of legal and regulatory affairs with the company.

G2E organizers are not resting on their laurels in the aftermath of the conference. The expo is already promoting next year’s conference, which will be held at the Venetian Expo from October 10-13, 2022.