GambetDC Extending Reach In Nation’s Capital With Kiosks At Bars 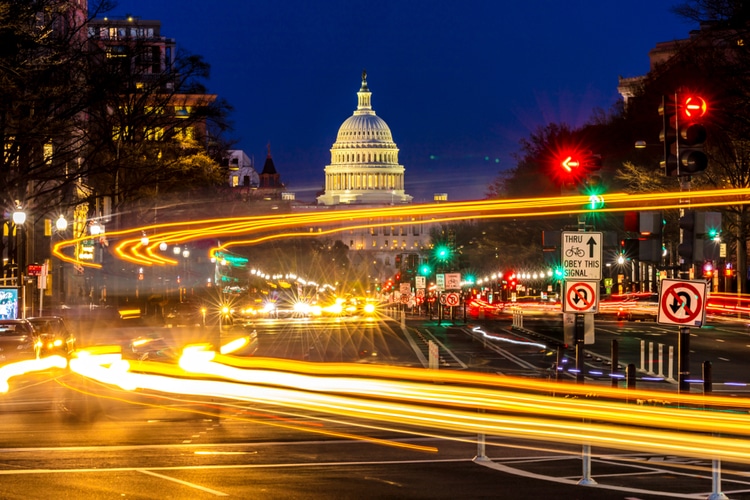 Photo by Joseph Sohm via Shutterstock

There’s been a lot of talk about infrastructure in the nation’s capital of late, and that also applies to the DC Lottery’s sports betting platform GambetDC.

The DC Lottery began extending the reach of GambetDC Friday with self-serve kiosks at four local bars — Ben’s Next Door, Lou’s City Bar, Takoma Station Tavern, and Dirty Water. The rollout will include former Washington Football Team players Fred Smoot, Santana Moss, Brian Mitchell, and Charles Mann making promotional appearances. The DC Lottery’s goal is to have the kiosks operating at up to 20 locations by the end of the year.

“You’ll see each organization call it ‘their sportsbook,'” said Nicole Jordan, director of marketing & communications at the DC Lottery. “We wanted them to do that, and that’s how it becomes a success. They have their brand and we work with them. It’s no longer the lottery pushing out messages.

“By the end of the year, we’ll have a network with breadth. We want to make sure [bettors] have the opportunity to play wherever they want to, however they want to, and really have a robust retail network to complement mobile.”

The District is a unique landscape that sometimes puts a premium on exactly where you can place wagers. Some locations are completely off limits as federal property, while sportsbook operators, considered Class A operators, offering wagers at sporting venues have a two-block exclusivity zone within which they are the only available digital platform. The DC Lottery’s expansion with what are considered Class B operators offers an opportunity to keep GambetDC competitive with William Hill (Capital One Arena) and newcomer BetMGM i(Nationals Park) n the nation’s capital.

‘We’re launching a sportsbook with no sports’

GREAT NEWS, DC! We're excited to announce starting July 30th, you can officially bet IN-PERSON at some of your favorite establishments in D.C.!

You can support local businesses and the city when you play with #GambetDC! It's a win for EVERYONE 🤩

Much like every jurisdiction that legalized sports wagering in 2020, whatever original plans for rollout and expansion the DC Lottery had for GambetDC last year went completely out the window due to the COVID-19 pandemic. Jordan recounted “sitting in a room for March Madness for initial launch and we were testing. We were doing a final walkthrough, and an NBA game gets canceled.”

After seeing college games get canceled, she realized, “We’re launching a sportsbook with no sports.”

Lottery officials opted to postpone the launch until late May 2020.

The cash-only kiosks at Class B locations will serve a vital role in GambetDC’s expansion because they also help create an integrated network. Bettors will be able to create their bet slip at one location and cash winning tickets at another. In turn, locations will have the potential to make money on both sides of the transaction — a location gets 5% of the handle where the wager is made and 1% of the gross gaming revenue from a winning ticket where it is cashed.

“We looked at lottery games with similar payouts and came out with what we think is feasible for the retailers,” said Jordan, explaining the 5% and 1% payouts for retailers as standard allocation percentages. “We separate cashing versus sale so a shop owner can mandate and drive traffic to the store.”

The other key component of this expansion is helping local business, a daunting challenge as the District rebounds from the pandemic and federal workers slowly make their way back from neighboring states. Jordan pointed out that while Washington, D.C., proper has a population of 700,000, there are approximately 300,000 to 400,000 federal workers, and then there is also the tourism factor, which has been impossible to measure to this point.

Every sportsbook is in the business of making money, but in the case of one run by a state lottery, there is a mandate to turn a profit in order to bolster government revenue. A simple line-shopping comparison between GambetDC and newcomer BetMGM shows the challenge of trying to balance entertainment with the need for revenue. Using Friday’s Cubs-Nationals game as an example, the moneyline split at 11:45 a.m. EDT was -139/-112 at GambetDC versus -115/-105 at BetMGM.

Jordan concedes it is challenging for GambetDC, but she also thinks people are willing to play because DC Lottery has gotten out the message that it does give back to the District.

“It’s all about perception. You have that stigma” of being a state-run operation, she said when it comes to promoting GambetDC. “We are an innovative lottery in general, operating as a business and meeting the needs of everyone there. We’re showing we have the same product, the same experience, win the same amount but helping the city.

“For us, letting people know — and COVID has made people more amenable to that — we created this program to bring an industry to the District. We’re bringing jobs for people who are specially trained. … [It’s] helping the neighborhood, and this program specifically does that. It puts a face to the general fund. That makes it amenable to the public.”

Will the kiosks bring a boost?

Competing against one of the world’s most well-known sportsbooks in William Hill — which opened its full-service sportsbook inside Capital One Arena in May — was always going to be a daunting task for any competitor, state-run or otherwise. GambetDC has held its own in terms of tickets written with more than 46% of the overall bets placed since William Hill entered the marketplace last August, but its $42 million in cumulative handle is less than one-third of its well-established competitor.

But there are reasons for the DC Lottery to be optimistic. The average wager placed through GambetDC in June was $41.83, an all-time monthly high that was also 21.3% above the overall average of $34.47. The District of Columbia was the only legalized sports betting location in the nation to set an all-time monthly high for handle in June, reaching $19.5 million.

Given that upswing, GambetDC’s expansion provides a chance for the DC Lottery to ride a potential rising tide in sports betting across the nation’s capital. It could also prove beneficial to the District, which has been one of Jordan’s top priorities.

“We built the technology and launched in a pandemic, so you see it, but you don’t,” she said. “The retail portion is surreal, everything is in play. I have the ability to meet business owners, I’m going into the community and seeing the impact.

“It is one of those things of product development where I can say, ‘I worked on that, I’m proud of that.’ It was for a reason, to make a difference for the community. I’m happy to see my city back out. I’m honored and humbled to be part of the process.”