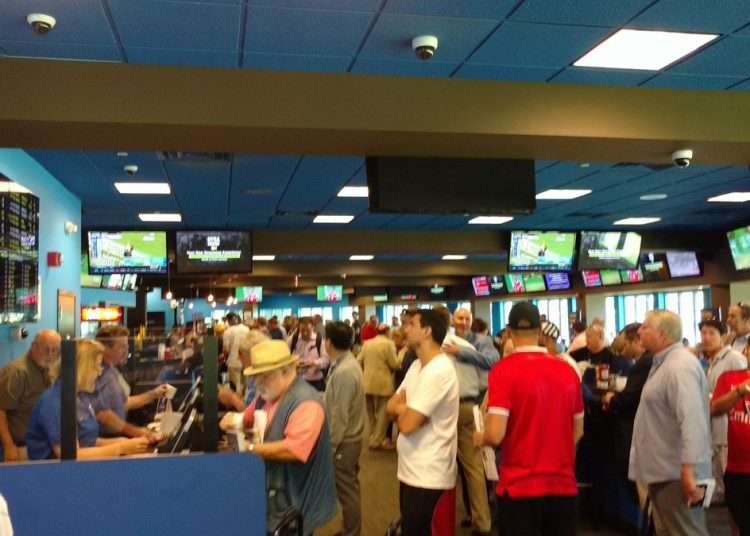 At the William Hill Race & Sports Book bar at Monmouth Park on June 14.

Here’s this week’s “Get a Grip,” rounding up top stories in sports betting and gaming, and the world of sports at large. You may have missed them, and they are worth reading. This is meant to be brief, so that’s it.

Let’s start with the biggest news of the week then dive into the rest:

New Jersey sports betting is off and running! The scene at Monmouth Park in Oceanport was lively as Governor Phil Murphy (he of Murphy v NCAA fame) placed the first two legal wagers at the William Hill Race & Sports Book shortly after 10:30 a.m. on Thursday.

Further downstate, the Borgata Hotel & Resort became the first Atlantic City property to start punching tickets where NBA great Dr. J, aka Julius Erving (some great theater for the Association to enjoy) , bet on the Philadelphia Eagles to repeat as Super Bowl champions.

The crowd gathered to watch the first bets at Borgata in Atlantic City. pic.twitter.com/1WRg2Uua8A

According to research firm Eilers & Krejcik Gaming, a mature New Jersey sports betting market, including online wagering, could generate $502m in annual revenue off ~$7.75 billion in handle. In comparison, Nevada did $248m in revenue off of $4.8 billion in handle in 2017

The rest of the highlights and stories to read over the weekend:

In the World of Sports At Large:

This high school pitcher chose to hug his childhood friend instead of celebrate his championship-clinching strikeout.

Tweets of the Week:

Ladies, if you’re looking for a place that is 95 pct male, Monmouth Park sports betting windows here is that place #wheretheboysare

Best thing to happen to Jersey since The Sopranos. https://t.co/zPucSqoGPT

On the day of their Stanley Cup parade, the Capitals took out a full-page ad to congratulate the Golden Knights "on the most successful inaugural season in the history of professional sports."

Videos of the Week:

Dennis Rodman is in tears on CNN right now. We are living in a simulation. pic.twitter.com/xZ4h6Y6dEO

With legalized sports betting upon us, Mike Francesa came up with a terrific idea today. It seems that Big Mike has invented daily fantasy sports. pic.twitter.com/Qlwm3ACbYA

In Rhode Island, a bill explicitly forbids payment of “integrity fee” to leagues

The great Hammering Hank Goldberg talks Pete Rose’s wagering, his own first wager and much more on “The Hedge”

A timeline and brief history of the “integrity fee” debate