Get A Grip — The Week In Sports Betting: Gearing Up For Ohio’s Start

It’s information overload everywhere, and there’s not time enough to sleep and eat and stay fully apprised of what’s happening on this crazy blue dot of ours (two out of three ain’t bad). Here’s the weekend Sports Handle item, “Get a Grip,” recapping the week’s top U.S. sports betting headlines, highlighting some fresh news, and rounding up key stories.

In a matter of days, people in Ohio will be able to bet on their pro and college teams just like their neighbors in Pennsylvania, Michigan, Indiana, and West Virginia, and there’s plenty of preparations taking place in the state.

The timing of the rollout at 12:01 a.m. on Jan. 1 is largely an opportune one for the state’s operators and bettors (even if some were disappointed it just missed Ohio State’s College Football Playoff semifinal game on New Year’s Eve). The Cleveland Browns will be playing as part of a full NFL slate for that Sunday’s betting debut, and the Cincinnati Bengals have a marquee Monday Night Football match-up against the Buffalo Bills the next day.

Among preparations, betting kiosks are being installed in hundreds of small retail outlets around the state in a manner that is uncommon across most of the U.S. More typical gaming centers like MGM Northfield Park are getting their in-person sportsbooks ready, and Ohio’s law also enables sports venues such as Great American Ball Park to open their own sportsbooks. As in many states, most betting is still expected to be done online, with the Ohio Casino Control Commission having approved 22 digital operators, even though they won’t all start immediately.

There have been hiccups along the way, with PENN Entertainment reporting this week that it has committed to paying its $250,000 fine imposed by the commission for improper underage marketing of its Barstool Sportsbook on a college campus. In addition, PlayUp faces a hearing early next year to try to put its license in good standing after the commission found it to have improperly taken bets through a slot-like Historical Horse Racing game.

With Ohio’s status as one of the biggest states yet to implement sports betting, Sports Handle and its network of sites and reporters will be on top of every aspect of its launch in coming weeks. And we’ll continue covering much, much more, as these stories of the past week show.

The future is now, or at least very soon

Does Caesars have an early edge in one-screen betting?

That New York is one big state

A deeper look at New York’s powerful casino location board

Be a good buddy and bet with me

Mass of stuff up in Massachusetts

Retail sports betting set to launch in Massachusetts on Jan. 31

MGM, BetMGM get initial approval for wagering in Massachusetts

Puerto Rico: The next frontier

Things going on above the border, too

The old GambetDC debate keeps on

A new wrinkle in betting podcasts

Counting up the money

Another bountiful month for online gambling in Pennsylvania

While it is not common for state regulators to comment on bets and winnings by individual gamblers, there was nothing common about the winnings in Louisiana last month by noted bettor Jim “Mattress Mack” McIngvale, and the state’s top gaming official took it in stride.

Sports Handle previously reported that World Series winnings of $52.7 million in bets in Louisiana by the Houston furniture mogul, backing his hometown Houston Astros, resulted in the state posting the worst gross revenue month in the history of legalized U.S. sports betting — minus $25.3 million for November.

Asked by Sports Handle to comment, Louisiana Gaming Control Board Chairman Ronnie Johns said in an emailed statement: “While the win by Mattress Mack with his sports betting on the Astros to win the World Series was historical, we are very happy for him. His win certainly took a huge toll on the November Louisiana sports betting revenue, but that is part of the process and we always welcome Mattress Mack to our state to place his bets. … He has already placed significant bets on the Houston Cougars to win it all in the Final Four in 2023.”

BetMGM has become an official sports betting partner of the NHL’s Nashville Predators. The sportsbook operator and the team this week announced the multi-year agreement, which will give BetMGM signage throughout Bridgestone Arena and a suite-level restaurant and bar bearing its brand.

BetMGM previously became the Tennessee Titans’ first sports betting partner in 2020. The sportsbook is one of 11 mobile betting operators in Tennessee, which is an uncharacteristic state in that it has no retail betting.

Five tribes in North Dakota had their amended compacts (available here and here) approved by the U.S. Department of the Interior and published in the Federal Register Dec. 19, which means they are now authorized to offer sports betting (and poker) at their on-reservation casinos.

The Sisseton-Wahpeton Oyate of the Lake Traverse Reservation, Spirit Lake Tribe, Turtle Mountain Band of Chippewa Indians of North Dakota, Three Affiliated Tribes of the Forth Berthold Reservation, and the Standing Rock Sioux Tribe all own and operate casinos in the state.

Interestingly, the Sky Dancer Casino owned by the Turtle Mountain Tribe and the 4 Bears Casino & Lodge of Three Affiliated Tribes have already been operating sportsbooks. The tribes opened them without explicit federal approval because of a legal gray area that didn’t prohibit sports wagering in the state. Now those sportsbooks are fully compliant with state and federal law, and the other three tribes will likely open up their own sportsbooks.

I’LL HAVE ALL THE APPS ON THE MENU, PLEASE: Navigating mobile sports betting apps: More is better [Las Vegas Review-Journal]

OH, NO, BETMGM, NOT YOU TOO?: Sports betting operator BetMGM hit by data breach [Reuters]

WOMEN HOOPSTERS WANT IN ON THE ACTION: Betting is “the next frontier” in women’s college basketball [The (Charleston, S.C.) Post and Courier]

SPREADING LIKE A BAD VIRUS: As sports betting grows in Africa, many see a real scourge [Associated Press]

GUESS HE CAN AFFORD IT: Drake bet $1 million on Argentina winning the World Cup — but lost it all [New York Post]

THEY DREW A LINE IN THE SAND OVER CONFLICT: PointsBet Sportsbook ends partnership with Drew Brees after his appointment to Purdue’s coaching staff [USA TODAY] 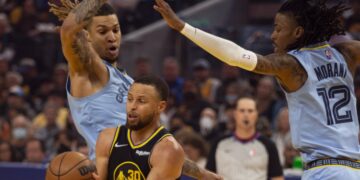