A lot of the sports betting industry news fit to link 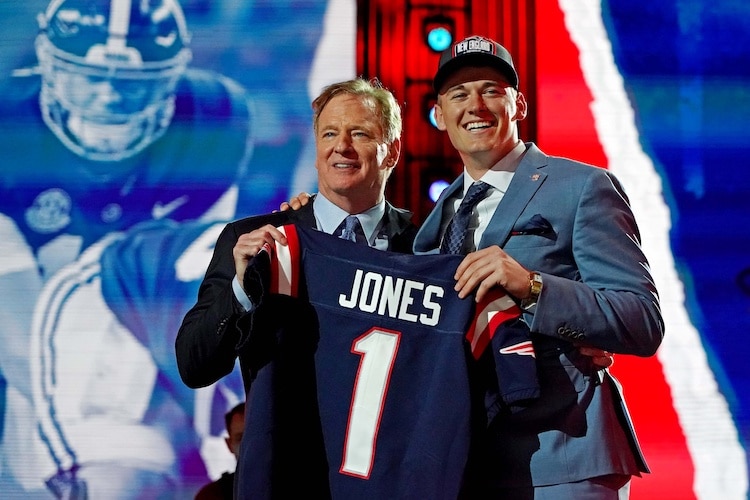 No U.S. sports betting story stood out this week as the most unexpected, impressive, momentous, mind-boggling, or otherwise superlative. (Braces for Friday evening news dump.) So let’s talk a little NFL Draft wagering!

After the first not-a-near-certainty chip fell with the San Francisco 49ers selecting North Dakota State quarterback Trey Lance at third overall (+340 leading up to draft, the favorite before the draft began), the most excitement surrounded the tango between quarterback-desperate Chicago Bears and a majority of the NFC East.

The Dallas Cowboys swapped the No. 12 pick to the Philadelphia Eagles for the No. 10 pick (in exchange for the 84th pick overall), leapfrogging the New York Giants at No. 11. The Eagles’ prize? Alabama wide receiver and reigning Heisman Trophy winner DeVonta Smith, who saw another member of his collegiate wideout corps Jaylen Waddle land with the Miami Dolphins at No. 7 overall.

Chicago Bears brass determined at that point they couldn’t wait any longer to move into position to get their guy, Ohio State QB Justin Fields, paying the Giants handsomely to jump up from No. 20 to No. 11 for their quarterback of the future. (In addition to the 20th pick, Giants got the Bears’ first overall pick in ’22, plus a fifth rounder in ’21 and a fourth in ’22)   Here’s how that played behind the counter, with our man Dan Back taking a deserved victory lap:

Justin Fields had 10-1 odds to be drafted by Chicago Bears at @DKSportsbook.

Seven teams had better odds, with Patriots as +250 favorites.

Now, the young man supplying the football to the pair of top-10 picks was Crimson Tide QB Mac Jones, at one time expected to go to the 49ers at No. 3. But he’s headed to the other coast in New England, which did not need to trade out of its position at No. 15 to get its presumptive quarterback of the future.  I didn’t catch any pre-event or in-game odds on Jones to the Patriots, but whatever they were had to be middle-to-long. The Pats haven’t had occasion to draft a quarterback in the first round since nabbing Drew Bledsoe at No. 1 overall in the 1993 draft. If Jones lasts as long as Tom Brady did in New England (approximately 7 million to one), he’ll ride off in roughly 2041, when Bill Belichick will be 90 years old.

Jones was also the fifth and final QB taken in the first round. DraftKings had “Exactly 5” QBs priced at -275 (73% implied probability) pre-draft, and plus money at four or fewer, and six or more. Order of selection didn’t matter so the chalk wins.

Top stories this week around our network

One Arizona Tribe Has Big Plans For Sports Betting, Other Gaming Expansion

Colorado Appears To Be ‘Punching Above Its Weight’ On Betting Anniversary

Can Hollywood Casino In Aurora Get A Barstool Bounce?

NYGC Clears Up Some Complexities In Mobile Sports Wagering Process

Sports betting isn’t yet live in Maryland, but one casino opened the space that will become its sportsbook this week, according to WTOP. Maryland Live! opened the Sports and Social in Arundel Mills, featuring at 100 x 47-foot video wall, odds boards, bar seating, recliners for high rollers, and a dining area.

Legal wagering isn’t expected to go live until the fall at retail venues after Maryland voters legalized sports betting via referendum last November and the General Assembly passed a bill with framework April 12.  The new law allows for up to 60 digital platforms and retail wagering at professional sports venues, horse racetracks, existing casinos, and many small businesses. The Maryland Gaming Commission is currently working on regulations.

If Flutter Entertainment spins off its U.S. assets in an initial public offer, the multinational conglomerate announced Thursday that it will not include FOX Bet in the potential listing.

Fox, which filed a lawsuit earlier this month before New York’s Judicial Arbitration and Mediation Services, can exercise the option in July. Under the suit, Fox asserts that it can acquire the stake at the same price Flutter paid for that ownership interest in December 2020, a company spokesperson told CNBC. Flutter, however, has argued that Fox must pay “fair market value,” to acquire the stake upon expiration later this year. The valuation is largely expected to be above DraftKings’ market capitalization on Friday around $22.5 billion.

During the first quarter of 2021, Flutter had revenue from its U.S. businesses of about $396 million, an increase of 135%. Of that amount, FanDuel generated about 91.6% of the division’s quarterly revenue with FOX Bet accounting for the remaining 8.4%.

In other business news Super Group, the parent company of European-based online sports betting brand Betway, is going public through special purpose acquisition company Sports Entertainment Acquisition Corp. in a deal that values the company at $5.1 billion. Under the deal, Super Group has agreed to the proposed acquisition of Digital Gaming Corp. The deal provides the combined company with sports betting and online gaming market access in 10 states.

Sports Entertainment Acquisition Chairman Eric Grubman formerly served as executive vice president of Business Operations at the NFL. The new company will be listed on the New York Stock Exchange, under the new ticker “SGHC.”

On Thursday, MGM Resorts reported 2021 first-quarter Consolidated Adjusted EBITDAR (earnings before interest, taxes, depreciation, amortization and restructuring or rent costs) of $218 million amid stronger than expected margin expansion, Macquarie said in a research note. In February, BetMGM said its U.S. market share for online sports betting and iGaming reached 22% in the states it operates in. Macquarie reiterated its outperform rating on MGM, while raising its price target to $54 a share.

Missouri’s SB 98, which would have legalized sports betting, failed to get voted off the Senate floor on April 27, killing its chances for approval. The bill would have allowed for statewide retail and mobile wagering via digital platforms tethered to existing casinos, but it also approving 10,000 video gaming terminals at truck stops, bars, and fraternal organizations.

According to the Missouri Independent, the bill would also have “revised laws on illegal gambling to remove any uncertainty about the legality of what are called ‘gray market’ machines.”

Bill sponsor Denny Hoskins said he was “disappointed” by the impasse, which leaves open the door for the bill to be revisited before the May 14 adjournment date. The bill was not voted on. Missouri lawmakers have been trying to legalize sports betting for several years, but have been unable to come to a consensus.

Bill #C218 has been introduced at first reading in the Senate: https://t.co/G5goym5sXI#SenCA #cdnpoli pic.twitter.com/ENBiCS30Qr

OH, OSCAR: Why is there no wagering on the Academy Awards in Nevada? [CDC Gaming]

More @TheNVIndy news! We are thrilled to announce the hiring of @howardstutz to cover gaming. Howard is the most experienced and most respected gaming reporter in the country, and we can't wait for him to write deeply reported, contextual pieces about NV's No. 1 industry.
1/2 pic.twitter.com/BlB5jNhqLJ

Listen to “3. ‘Get a Grip’: Florida sports betting? Not so fast; NFL Draft & Lightning(ish) Round” on Spreaker.

Have a good weekend, everyone.