After a stint with the WWE, Gronk reunites with Tom Brady in a much sunnier climate

by Charlie Wright
in Sports 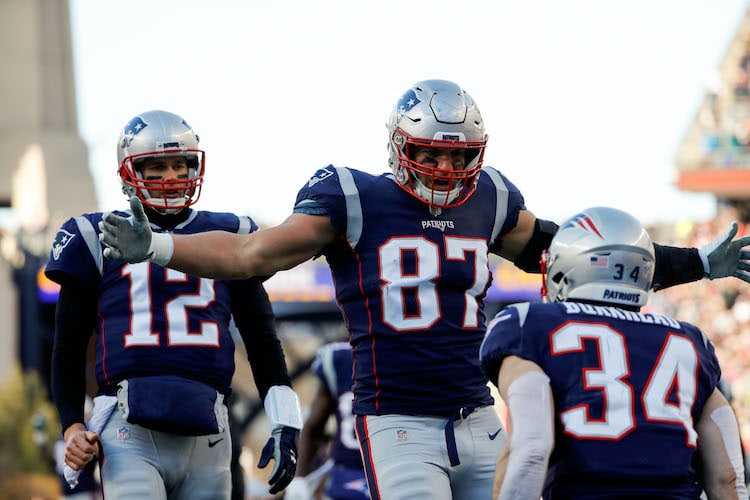 All they’re missing is Julian Edelman.

Tampa Bay added another Patriots legend on Tuesday, swinging a trade with New England to reunite tight end Rob Gronkowski with quarterback Tom Brady. The five-time Pro Bowler and recent inductee to the NFL 100 All-Time Team will “unretire” to join the Bucs after sitting out in 2019.

Coming off a 7-9 year and entering the offseason without a quarterback, Tampa Bay was initially nowhere near the favorites to win Super Bowl LV. Various sportsbooks had the NFC South squad at around +6000 to win the title. The Bruce Arians-coached Bucs had decided to move on from erratic signal-caller Jameis Winston, a former No. 1 overall pick. With no clear plan in place under center, oddsmakers were wary.

The Bucs then emerged as favorites to land Brady after he announced intentions to leave New England, and he signed in late March. His arrival launched the Bucs up the board, bumping their Super Bowl odds to +1700 on FanDuel Sportsbook and +1600 on DraftKings Sportsbook.

It's two years, $50 million fully guaranteed for Tom Brady, who can earn up to an extra $4.5M each year in incentives based on performance, making the playoffs, etc. Max value of $59M. https://t.co/gBW9mEsG6q

A month later, Gronkowski arrives and the lines are shifting again. Tampa Bay currently sits at +1500 on FanDuel, though the Bucs were down to +1200 at one point Tuesday, which is where DraftKings has them right now. FanDuel has the Bucs with the fifth-best Super Bowl odds, while DraftKings has them equal with New Orleans, behind only Kansas City, Baltimore, and San Francisco.

This offseason has been the best-case scenario for a Tampa Bay team with plenty of talent but a plethora of question marks entering the 2020 season. Brady and Gronkowski were an incredible tandem in New England, winning three Super Bowls together, and pairing them with wide receivers Mike Evans and Chris Godwin and tight end O.J. Howard makes for an imposing offense.

But Brady will be 43 when the regular season begins. His 4,027 passing yards last season were his fewest in a full year since 2010, and the 24 passing touchdowns his lowest full-season mark since 2006.

Gronkowski has battled serious injuries most of his nine-year career (including a lung puncture courtesy of former Seahawks safety Earl Thomas), only playing in all 16 games twice (his first two seasons). The tight end missed 13 games the past three years he played, along with the entire 2016 playoff run and eventual Super Bowl win. The year off could certainly be considered a positive for Gronkowski entering his age 31 season, though as the current WWE 24/7 champion, he didn’t exactly rest his body while away from the game.

These depleted versions of Brady and Gronkowski now head to a passing attack in Tampa Bay that had been predicated on downfield throws and minimal tight end usage. Winston led the league in intended air yards by more than 900 last season, with the majority of his 626 attempts going to wide receivers and running backs. Tight ends Cameron Brate and Howard were limited to 55 and 53 targets, respectively.

Equally significant to the Gronkowski trade could be the moves that follow. Howard and Brate are talented players who could be major assets to plenty of teams, and one or both of them are likely on the trading block.

The Bucs haven’t done much to improve a defense that finished fourth-worst in points allowed last season, aside from re-signing Ndamukong Suh and Jason Pierre-Paul after franchise-tagging Shaquil Barrett. A trade for an impact defensive player or for additional picks in this week’s NFL Draft could help that side of the ball.

Notable names still remain in free agency as well, so the Bucs could go all-in on this season and add a Jadeveon Clowney (if the price tag comes down), Logan Ryan, or Everson Griffen. The team is middle of the pack in terms of cap space remaining. The Brady/Gronkowski window is quite short at this point, so it would make sense to fully dive into win-now mode.

No matter how the team proceeds, those February futures tickets are looking pretty good right now.

Charlie is an experienced writer and editor with a background in print journalism. He currently leads social media operations for the USBets network, RotoGrinders and ScoresAndOdds.