Submissions add to growing queue of applicants in Land of Lincoln

by Chris Altruda
in Casino, Industry 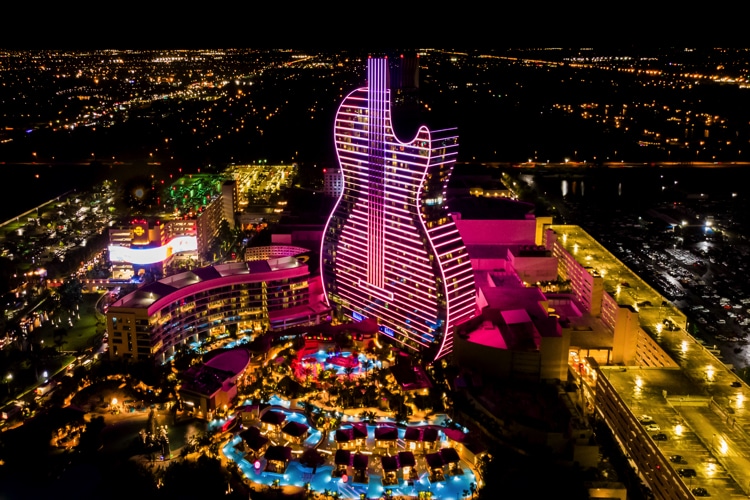 Hard Rock Sportsbook is the latest gaming operator to apply for a sports wagering license in Illinois, with the Illinois Gaming Board showing on its website the Florida-based casino has put in for both retail and mobile licenses.

The retail license application was submitted Aug. 23 by 815 Entertainment, the local ownership group for the casino in Rockford near the Wisconsin border. Hard Rock has been operating a temporary casino there since last November — with electronic gaming devices and slots only — and will break ground on its permanent venue Wednesday.

Seminole Hard Rock Digital put forth the Management Services Provider application required for a mobile license to the IGB on Aug. 16, further adding to a growing list of operators looking to join the seven options currently available to Illinois bettors. Unibet has been in the queue the longest, submitting its application in November 2020, while WynnBET put in its paperwork last November.

Two operators — Circa and Bally Bet — submitted their applications to conduct mobile wagering May 16 and Sept. 12, respectively, and both will be tethered to land-based casinos. Tekkorp Digital Application Corp., doing business as Caliente Interactive, was the only applicant the IGB moved forward for an online-only license April 28.

BetMGM is the most recent mobile operator to begin taking wagers in Illinois, launching in March, and Barstool Sportsbook entered in March 2021. There has not been a retail sportsbook launch in Illinois since March 2021, when FanDuel Sportsbook & Horse Racing began accepting wagers following its rebranding of Fairmount Park as part of the horse racing track’s plans to expand into a racino.

Though there is no timeline for the IGB to process applications for approval, it would appear Hard Rock’s mobile application is more likely to be the first of its two submissions to be approved. There is precedent for that in Illinois as FanDuel launched mobile wagering in August 2020, two weeks before Par-A-Dice opened its retail book when the Peoria-based casino was its tether.

After Wednesday’s groundbreaking, Hard Rock has plans to open its casino in November 2023. It has urgency to do so given the Ho-Chunk Nation has plans to break ground on a $400 million casino over the state line in Beloit Wisconsin — less than 25 miles from Rockford — next year.

Depending on the IGB’s turnaround time on the Management Services Provider application, Hard Rock could be the closest retail option for central Wisconsin bettors, with the state capital of Madison approximately 55 miles from the Illinois state line. Circa, which is tethered to the Full House Resorts casino in Waukegan in the northeastern part of Illinois north of Chicago, has the potential to draw from the Kenosha, Racine, and Milwaukee markets.

Wisconsin currently has sports wagering available only through tribal gaming on-site at Oneida Casino in Green Bay and St. Croix Casino in Danbury in the northwest part of the state. The Potawatomi Tribe has expressed interest in offering on-site wagering for its casino in downtown Milwaukee and could be accepting bets before the end of the year.

Retail wagering in Illinois has averaged slightly more than $30 million in monthly betting volume in 2022, highlighted by a $43.7 million handle in March. Rivers Casino in Des Plaines just outside of Chicago has attracted the most in-person betting, with its $88.5 million in wagers accounting for 41.7% of the state’s total this year.