Family horse racetrack with long history will get a facelift, and hopefully, become a destination 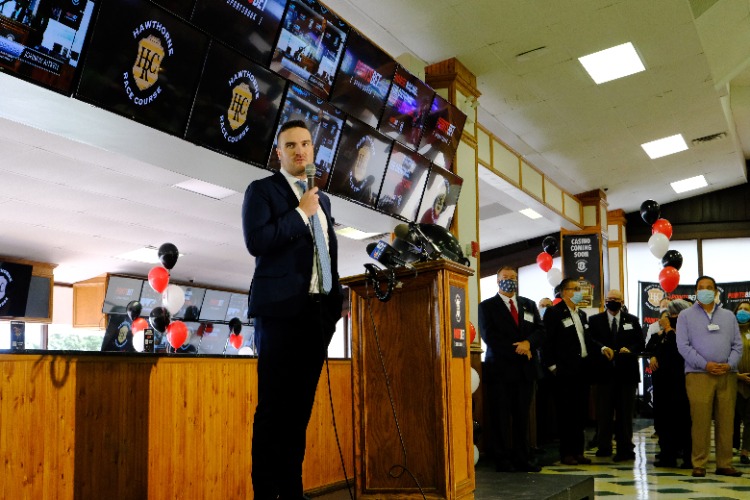 Whether you call them “scrappers” or a “startup” doesn’t really matter to the teams at Illinois’ Hawthorne Race Course or sportsbook operator PointsBet. Either way, they want the takeaway to be that they are risk-taking, innovative thinkers with big plans to change the Chicago sports betting, gaming, and horse racing markets.

“We made a beeline to this market, and we really wanted to partner with a great facility and a great tradition, and that’s everything Hawthorne has,” PointsBet CEO Johnny Aitken said at the opening of Hawthorne Race Course’s retail sportsbook last week. “We will be building a state-of-the-art sportsbook facility, and it will be one of the biggest sportsbooks in the world.”

When PointsBet went live online early last month in Illinois and later cut a ribbon for its brick-and-mortar sportsbook last week, both companies made history: Hawthorne became the first horse-racing facility in Illinois to offer live sports betting. The only other places to do that in the U.S. are in New Jersey, at The Meadowlands and Monmouth Park. The marriage, both sides hope, will not only produce a gaming destination, but will help to rejuvenate the Illinois horse-racing business.

PointsBet was the fourth online operator to go live — after BetRivers, DraftKings, and FanDuel — in what promises to be a highly competitive Illinois sports betting market. Illinois so far is the second-biggest state population-wise, behind Pennsylvania, to offer live, legal sports betting.

Horse racing a priority for PointsBet

“Sports betting and horse racing are kind of the same thing,” John Walsh, assistant general manager at Hawthorne, told Sports Handle. “They are different sides of the same coin. In both, you kind of study and try to figure out a way to make some money. There is some crossover, and we figured we could get some people to bet on sports when they come in for horse racing and vice versa.”

Walsh said PointsBet, an Australia-headquartered company that places a premium on horse racing, has already put its money where its mouth is. In the Illinois bill that legalized sports betting, there was little to nothing earmarked for horsemen, but they’ll benefit merely from the existence of casinos at their venues — a percentage of tables games and slots profits are earmarked for the horse-racing purses.

PointsBet was a key sponsor last month for the Night of Champions harness racing series and chipped in $60,000 to go toward purses.

USTA Youth Delegate Emma Schrock took a trip to Hawthorne Race Course to take in the action of Night of Champions. Check out her story!https://t.co/DI4WaX43DQ

According to Walsh, there is already a spike in the number of horses being bred in Illinois to meet the anticipated increase in interest due to the new gaming law. Walsh said that this season, there are 60-70 2-year-olds running in harness races, and that number will spike to nearly 200 next year. And 700 standardbred horses were put into foal this year in preparation for the late 2021 and 2022 seasons, when the casino at Hawthorne will be fully open.

“I think sports betting can play a part in the revival of horse racing,” Aitken said. “I saw it in Australia, 10-20 years ago, horse racing was going down when sports betting was truly starting. Both of them now work parallel and elevate each other.

“I see that opportunity [here], and it’s going to be walk before you can run, but we think sports betting can inject something really meaningful into horse racing, bring a new crowd and a new demographic to horse racing, and they can exist together.”

Hawthorne casino will be massive, a ‘destination’

In order to get to that point, there is still much work to be done. When PointsBet launched its retail location last week, it was in a temporary setting at Hawthorne. The temporary book is located in the clubhouse, and patrons can walk directly out onto the track’s apron. It has a video wall, teller windows, kiosks, and seating.

The plans for the permanent space, as Aitken implied, are massive. Walsh says the casino floor with be 48,000 square feet, and the gaming/hospitality area will cover three floors, with a steak house at the top and a sportsbook anchoring the whole affair on the ground floor. There are also plans for a food court on the third floor and some dining options on the sportsbook and casino levels.

The permanent casino will be in the grandstand area, and in the sportsbook patrons will be able to bet via mobile device, at a teller window, or at a kiosk. There will, of course, be state-of-the-art technology available in the form of a video wall and other features, as well as a chance to watch the horses run live. The plan is to have the venue open in late 2021.

“Once the casino is actually built, there will be casino, sports betting and racing … you can’t really see that too many places,” Walsh said. “The facility is going to be just gorgeous for the horses, and people are going to think, ‘This is incredible. I could go there.’ This will be a destination.”

One advantage of partnering with Hawthorne is that PointsBet won’t just get a single retail sportsbook out of the deal — according to Illinois law, racetracks can open books at up to three off-track betting parlors — and the plan is to take full advantage. Hawthorne will open PointsBet-branded sportsbooks at its Crestwood, Oakbrook, and Prospect Heights locations. The Crestwood OTB, according to Walsh, will be the “marquee” location with areas for both horse-race betting and a sportsbook, and 35-40 digital television screens.

The idea is to ring the Chicago metro area and make retail sports betting at a PointsBet location convenient from anywhere. The OTB books are not yet open, but plans are in the works.

“I think this is new for legalized sports betting,” Aitken said of the OTBs. “This is new ground that we’re encountering in Illinois, and we’re very lucky that we get to partner with a great partner like Hawthorne that has that footprint.

“We were able to very strategically decide what those venues would be. We wanted to create a net, so we can serve the north, the west, and the south parts of a huge market.”

We had @AlTruda73 masked up an on site at @clubhawthorne for the opening of the @PointsBetIL sportsbook on Wednesday.

It's one of four the bookmaker will be opening in Chicagoland.

On balance, the combination of a horse racing and sports betting was appealing to both sides, and after being approached by up to 20 potential sports betting partners, Walsh said choosing PointsBet was a slam dunk.

“PointsBet was kind of like us,” he said. “Kind of a startup in the U.S. Even though we’ve been around for a very long time, we’re a startup with casino and sports betting. They are innovative. They do their own technology. … All they are doing is sports betting, and that’s what they do.”

“There’s definitely that mentality that we are ‘scrappers,'” Aitken said. “We understand where we are positioned currently, and where we want to get.

“So, honestly, the first party we spoke to when we came to Chicago was Hawthorne, and from day one, I know this sounds cheesy, but there was just that sort of connection and click with the two parties. We’re both challenger brands, we both have that vision of what it takes to succeed. It’s about goodwill, customer service, and really knowing the market, and for us it’s about our technology. … I feel that we’ve truly researched and want to speak to Chicago and Illinois.”

Chris Altruda contributed to this report