Can Hollywood Casino In Aurora Get A Barstool Bounce? 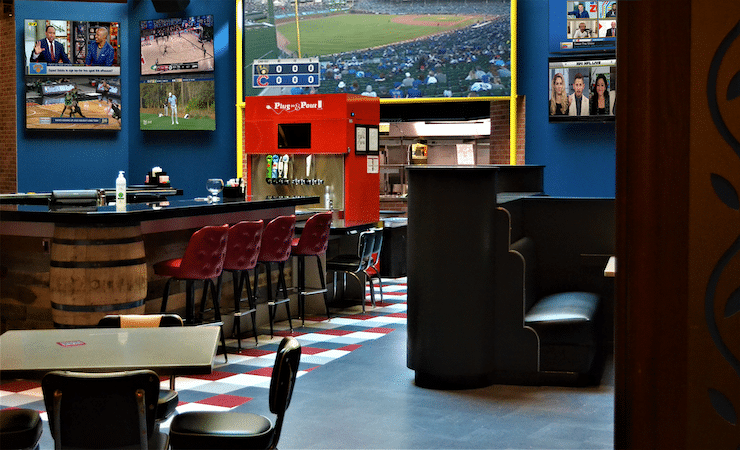 AURORA, Ill. — Pick a challenging business scenario over the past year-plus due to COVID-19, and chances are Hollywood Casino Aurora Vice President and General Manager Greg Moore and Sportsbook Manager Hemal Patel have faced it head-on.

Opening at reduced hours and limited capacity? Yes, with the latter still ongoing.

Repurposed an inactive buffet area to make it a sports bar worthy of the Barstool Sports brand to complement its sportsbook? Done and up and running.

The last item on their laundry list has taken on added importance as Hollywood Aurora is the official land-based tether of the Barstool Sportsbook mobile sports betting app in Illinois. Bettors who want to play and parlay with Dave Portnoy must make the drive to Aurora — approximately 40 miles west of downtown Chicago — to complete the in-person registration required to obtain mobile access.

Over burgers, Moore and Patel both recounted the challenges they faced and observations they’ve made as they continue to navigate the still-evolving gaming landscape.

Stops and starts in fits and bursts

When Hollywood Aurora took its first sports bets last August, concluding a five-week sprint to be operational, Moore did not know his casino would be Barstool’s tether. In fact, he even admitted based on how much further along his Hollywood counterpart in Joliet was in terms of sportsbook amenities, it made more sense to think Joliet would serve that role.

“The ramp-up process was fairly vigorous in part because we had to take local team members to work with Penn Interactive [which] actually runs the program,” Moore said. “We had to modify our own internal controls, get IGB approval of those internal controls, I had to nominate some unfortunate team members to go through the testing process, which at the time I thought would be vigorous — I don’t think I realized how vigorous [it would be].”

Patel was one of those team members, venturing to Ameristar Casino in East Chicago, Indiana, to get a feel for how things operate. It was a stop-and-go process for him, not only learning a whole new skill set coming from Hollywood’s poker room, but also having his learning curve interrupted by both COVID-related shutdowns.

“A lot of knowledge I had gained I had to refresh myself again,” he explained. “When we came back and started getting the internal controls that were to be submitted to the gaming board, got those approved and then we opened our temporary sportsbook. … I’ve learned a lot, [and] there’s still a whole lot to be learned.”

A wild winter and spring

Moore did not pinpoint the time he found out from Penn National Gaming that Aurora and Barstool would be joined at the hip, but he and Patel have seen some ups and downs. Prior to the mobile launch, Hollywood Aurora weathered a rough Super Bowl — its sportsbook finished February with barely a 0.01% hold rate — and generated just $772 of revenue on more than $800,000 wagered.

That was in stark contrast to operators doing well across the state. The IGB reported the state’s sportsbooks totaled $7.6 million in revenue that month from just the Super Bowl and nearly $35.4 million overall.

March marked the sportsbook’s first NCAA tournament, and Patel estimated it would have had a 15% higher handle had bettors been able to wager on in-state college teams — with a prime opportunity lost in the second round when Chicago-based Loyola upset Illinois.

“We had people coming in, ‘I want to bet on Illinois, I want to bet on Loyola,’ and we had to tell them, ‘Sorry, Illinois doesn’t take those bets,'” Patel said. “You had to see how many people we had to refuse.”

But those moments paled to earlier this month, when Gov. JB Pritzker opted not to renew Executive Order 2020-41, which suspended the in-person registration provision of the Sports Wagering Act. Barstool was still a new mobile player in Illinois, launching a week before March Madness, and it made sense a renewal would provide an opportunity to leverage its fresh presence into the start of baseball season.

Moore admitted he had been lulled into expecting another renewal would occur, and when it did not happen, it became an all hands-on-deck situation to get the word out to download the app over a frantic weekend.

“Once we were told, ‘Oh no, the governor is not going to extend the online registration component,’ we were putting stuff out through our channels to our players,” Moore said. “Dave [Portnoy] went on over the weekend before it was too late and made his announcement: ‘Hey Illinois, download this.’

“We made the same commitment and announcement to our database and got the world on notice – you have three days to download. And we still have seen people driving in to get it done, so luckily we did have that three-day period to mobilize and get god knows how many downloads and registrations done. We’ve had hundreds of people since then come here to complete their registration.”

On creating the Barstool atmosphere

When Hollywood Aurora took its first bets, the sportsbook was a temporary construct near the stage in the casino. Moore was able to repurpose the buffet area — which had been long dormant due to COVID mitigation rules — into a sports-bar atmosphere with multiple large-screen televisions situated throughout the area and a second area with recliners and large screens for additional viewing spots.

Patel joked that “we built this beautiful property while I was golfing in Tampa” during the second shutdown from mid-November through January and added that “I got very lucky in this situation because most of the people and most of the things they wanted from poker transitioned to the sportsbook and that is what we get right now.”

A key takeaway of the renovation is that the complete area, which includes the sportsbook desk being accessible from the sports bar, has yet to realize its full potential.

“The big question for us is how does it manifest itself?” Moore said. “Will it be watching it from the couch with their buddies or bringing their buddies here and having their Old Style Beer in honor of the Cubs with a Chicago dog? Some people like the camaraderie and the feel of being in a sports bar with a sportsbook and surrounded by TVs and things they’re cheering together for like at a game. Some people want to enjoy it from their couch — we want to support both because however you want to do it, we have it.”

When it comes to leveraging Barstool’s vast social media presence, Moore feels a less-is-more approach works best. He can call on them for special events — the Crosstown Classic between the Cubs and White Sox as a potential example.

Moore pointed out that Penn National Gaming has more than 40 properties, and reaching out for publicity every time is counterproductive, especially since he knows, “When they mobilize, they get a result. Knowing that when the timing is right, we’re going to be the beneficiary of that at some point, it’s fantastic.”

Moore is proud of the resiliency of both his team and the industry in general. He also offered praise for the state’s gaming board, noting its representatives have been available at all times — even well into the night while working “long and bizarre hours” — as they continue to navigate toward a full reopening at 100% capacity.

When that moment happens, Moore admitted, he will breathe “a huge sigh of relief.”

“Right now, there’s enough players out there that want to be here, that we will hit Friday and Saturday nights at what we’ll call max capacity on the floor with a little bit of a line backed up. And that’s heartbreaking to see anytime when you could be providing a service, people want the service, and you can’t get it done.

“Once those limits have been removed, I think it will give people a better experience overall.”