Huberty Set To Make Push For Sports Betting In Texas 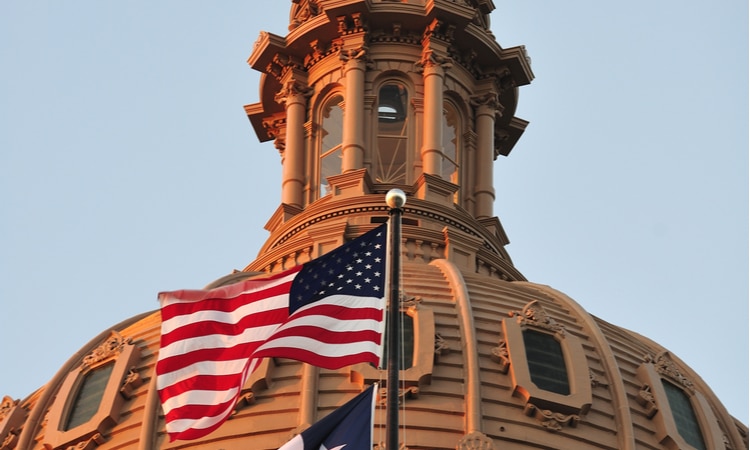 That number comes up frequently in conversation with Texas State Rep. Dan Huberty when discussing his efforts to bring sports betting to the Lone Star State, considered one of the “Holy Grail” states for the eye-watering revenue it could potentially produce if legalized.

Based on 2020 state handles nationwide, that figure would rank second behind only New Jersey. It is not a number Huberty has pulled out of thin air, either. The Sports Betting Alliance — a group of Texas-based professional sports teams and sports betting operators — estimated that Texans wager $5.6 billion annually at offshore and other unregulated platforms on a yearly basis.

Consider the oft-stated adage that “everything is bigger in Texas,” and it is possible that that $5.6 billion figure could be underselling what the state can generate in a regulated market.

Of course, the state won’t reap $5.6 billion in tax dollars for education — or anything else — but based on a 7% hold and the 10% tax rate Huberty has in his bill, the state could take in around $40 million annually once the market is mature.

For comparison, the state that has taken in the most tax revenue since sports betting became a states’ rights issue in 2018 is New Jersey. Between June 2018 when the first retail sportsbooks went live and February 2021, the state has collected more than $113 million in tax dollars. The tax rate is higher in New Jersey, but the population is smaller.

By bringing those dollars onshore and wagering under licensed operators within the Lone Star State, Huberty is hoping to find a consistent source of revenue for education in Texas — a cause personal to him as the author and primary proponent of HB 3. That landmark 2019 bill — passed with unanimous approval in both statehouses — greatly expanded school funding in the state in multiple areas, notably special education and teachers’ salaries, and did so while also lowering property taxes.

To continue funding HB 3 at a level Huberty sees fit, sports betting looks to be a reliable avenue. Huberty is the author of HB 2070, which would decriminalize and legalize sports betting, including mobile wagering, and allow for professional teams to be licensed operators. The bill is one of 10 gaming-related proposals already filed in Austin this year.

“When we went through the process, and talked about we’re going to do this, finding long-term payment for this, we had to find revenue sources,” Huberty explained to Sports Handle. “We don’t have an income tax. We don’t want to impact oil and gas — the question is how do I find sources of revenue untapped and available.

“I had no idea that much money was wagered on illegal platforms.”

What’s in the pitch

Huberty will get the chance to make his case Wednesday at a public hearing. The Republican’s pitch will have to be persuasive — the goal is to tie the bill to a House Joint Resolution (HJR 97) to have it on the ballot in November as a constitutional amendment. In order for a House Joint Resolution to pass in Texas, it requires two-thirds majorities in both the House (100 of 150 members) and Senate (21 of 31) and then could not be vetoed by the governor.

Calling all fans! 📣 We have an opportunity to legalize sports betting in TX this year. The House State Affairs Committee is expected to consider sports betting legislation soon. Ask your legislator for their support: https://t.co/zt3XP8j2qW #txlege #LetTexansPlay pic.twitter.com/fMzEYtcA2M

The first step for Huberty, though, is to get it through committee and out of calendar, “to create further discussion.” He has bipartisan support in the Senate, where Democrat Chuy Hinojosa has a bill (SB 736) with common language that covers where sports betting can be offered — most notably sports facilities that are “the primary host of a Major League Baseball, National Basketball Association, National Football League, Major League Soccer, or National Hockey League professional sports franchise in this state and that has seating capacity of at least 5,000 people” as well as the state’s three Class 1 horse racetracks.

Having teams as licensed operators is a key component of Huberty’s bill — he thinks it makes sense because they have the most direct interaction with bettors. Only three jurisdictions — Virginia, Illinois, and Washington D.C. — have similar laws, and the Washington Football Team is so far the only professional sports team with a license after being granted one in Virginia. Earlier this week, lawmakers in both Maryland and Arizona approved sports betting bills that will allow for betting at pro venues, as well.

“When people show up to the game, it creates the opportunity to go to the platform and generate those resources for them,” he said. “We don’t expect sports teams to hire out IT departments. We felt that when it came to the ability of who to do their marketing to generate the interest, who better than the team? They have direct contact with the customer and consumer.

“It creates a stickiness at the top of the process for adopting. You make it simplistic and hit the ground running while using internal resources.”

Unlike a competing bill put forth by Rep. Harold Dutton (HB 1121), Huberty does not have any carveouts to prevent wagering on college sports. That could prove crucial in reaching that projected $5.6 billion annual handle in legal betting, considering Texas has 12 schools that play college football at the highest level (FBS) and 24 that play at the Division I level for men’s and women’s college basketball.

“(A) significant portion of wagering is on college sports. Based on data, up to 50%,” Huberty noted. “That’s a big number when you consider the amount of wagering. We felt it was important to recognize the opportunity, to have that debate. When you draft legislation, there’s a lot of opinions. What you’re seeing today is not the ultimate end but the buy-in.”

The headwinds from Austin

Even with bipartisan support, Huberty still faces substantial hurdles to bring sports betting to the Lone Star State. Texas Lt. Governor Dan Patrick is already on record being against it, and there is work to be done in both houses, where the Republican-led 83-67 composition of the House and 18-13 of the Senate means he will have to woo Democrats provided he has unanimous support within his party.

Huberty, though, is confident Patrick, who is also in charge of the Senate, will at least be open-minded to consider the options presented to him.

“I have known Lt. Governor Patrick for many years since either of us were elected,” Huberty said. “We’ve worked in the same local political organizations, worked on a variety of issues together, sometimes maybe opposed to each other. He’s thoughtful and fact based. He is fair when presented with the facts.

“You don’t become lieutenant governor without being smart, and he’s navigated political waters. He makes decisions based on fact.”

The Lone Star State is all about the freedom of choice. Let's allow Texans to decide for themselves whether or not to legalize sports betting. Ask your legislator to support your freedom of choice now! #txlegehttps://t.co/DHChyVFGQY pic.twitter.com/medNN2i8Y2

Despite Patrick’s opposition, Huberty feels he can count on the support of the general public. After all, Texas is a state that prides itself on its independence, its less cumbersome regulatory process, and sense of free enterprise. Huberty feels his bill touches on all those things by having the teams operate their licenses under the supervision of the Department of License and Regulation, and he’s already shown the ability to make foundational changes in Texas via HB 3.

“I would never bet against me on some of the things we’ve gotten done,” he said. “I’m asking my colleagues to allow Texans to determine for themselves to authorize, regulate, license, and tax [sports betting]. Texans like their independence, their freedoms, to make their own decisions. We’re well known for letting people decide for themselves. If it resonates with my colleagues to that degree, we’ll be able to convince them.