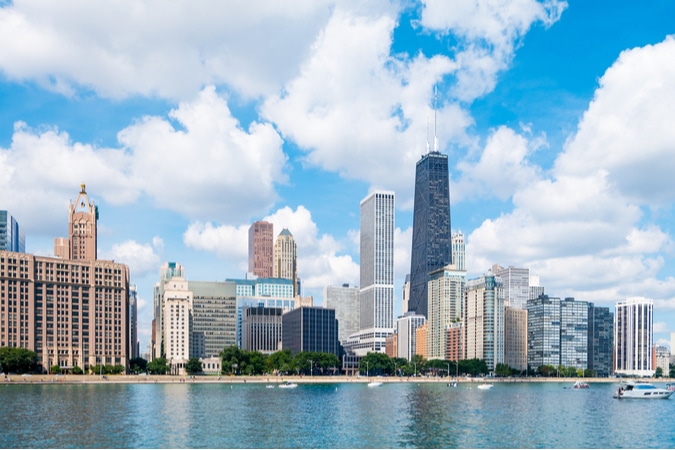 Despite the expected dip in handle that comes with the Super Bowl representing the only football game and three fewer days of wagering in February, bettors in Illinois placed nearly $510 million in wagers, according to the state’s Gaming Board, to edge out Pennsylvania for third nationally in handle for that month.

February’s total was well off January’s record handle of $581.5 million, but Illinois was not alone in seeing a drop-off from month to month. After a record-setting national handle of more than $4.36 billion to kick off 2021, that number dropped to less than $300,000 shy of $4 billion for February. Illinois’ handle was $246,772 more than Pennsylvania’s, marking the first time it finished in the top three nationally since it started taking bets in March 2020.

Operators posted a win rate of 6.94% — notably lower than January’s 8.24% — which resulted in nearly $35.4 million in revenue, in addition to tax receipts for the state amounting to more than $5.3 million. Cook County, which is home to Chicago, received an additional $541,832 in tax receipts.

Illinois sportsbooks bucked the trend of an otherwise unspectacular February for operators. When taking out New York’s revenue numbers since it does not report handle, the national win rate for February was 5.43% — the worst since September at 4.94% and nearly one-third off from January’s 8.19%. The national standard has settled at around 7%.

Though technically all five mobile operators saw a drop in handle, it occurred to varying degrees as market share moved around slightly. DraftKings, though, continued to rule the roost as it generated more than $198.7 million in wagers, which accounted for more than 40% of the overall online handle — down from 42.3% in January.

PointsBet and William Hill were close to unchanged in terms of handle amount month-to-month, with the former just shy of $40 million and the latter slightly above $8.9 million. The Australian-based sportsbook accounted for 8.1% of the state’s mobile handle.

Overall, online wagering accounted for more than 96% of the overall handle, which is in line with Illinois’ overall numbers since launching last year. Though Gov. JB Pritzker let Executive Order 2020-41 lapse last week, which brought back in-person registration to gain mobile access, it can be argued his repeated renewals created a needed foundation for sports betting in Illinois — more than $2.86 billion has been wagered online since BetRivers was the first to enter the market in June.

Despite the gap in handle to DraftKings, FanDuel posted the highest online revenue for the fourth consecutive month with nearly $11.7 million, as four of the five operators reported lower totals compared to January. DraftKings also reached eight figures with more than $10.3 million in revenue, while BetRivers totaled slightly more than $6.6 million. PointsBet had a slight month-over-month decline to $3.9 million, but William Hill improved on its January total by 46.7% as it posted a single-month high of $722,226.

Parlays continued to be the primary driver of revenue for Illinois operators, which had a win rate of 17.8% in February to generate more than $16.8 million on more than $94.5 million wagered. Basketball also contributed a large portion to the revenue total with nearly $11.8 million. While the Super Bowl generated $7.66 million in revenue for Illinois operators, the overall monthly revenue total for football ended up being short of $4.2 million.

Rivers Casino in Des Plaines — just outside of Chicago — dominated the retail sports betting scene as it accounted for nearly half of the $19.7 million wagered in-person ($9.7 million) and more than 40% of the $2.1 million in revenue.

Though all venues were operating at 50% capacity as part of COVID-19 mitigation measures, there were some bright spots as Casino Queen in East St. Louis set a monthly high in handle at more than $3.2 million and Argosy Casino in nearby Alton checked in with nearly $2.7 million in wagers. Both venues set new benchmarks for monthly revenue, with Casino Queen totaling $543,754 and Argosy $430,022.

Grand Victoria Casino reported $1.2 million in wagers, reaching seven figures for the second time since launching last August. Bettors came out ahead at Par-A-Dice in East Peoria, collecting $472,345 in winnings on $448,221 in completed bets.

Basketball accounted for nearly half of the handle as more than $255 million was wagered on completed events totaling $514.9 million bet. With the end of the football season, bettors turned their attention elsewhere, as golf, hockey, and tennis all generated substantially more action than they had before. With the Australian Open covering two weeks, tennis handle soared to nearly $45.3 million — more than three times the amount from January.

The golf handle more than doubled to $9 million, and hockey climbed nearly 50% to just shy of $26.3 million. Motor racing also enjoyed its best month of handle in Illinois, as the $1.4 million wagered exceeded the entire amount bet on the category in 2020.