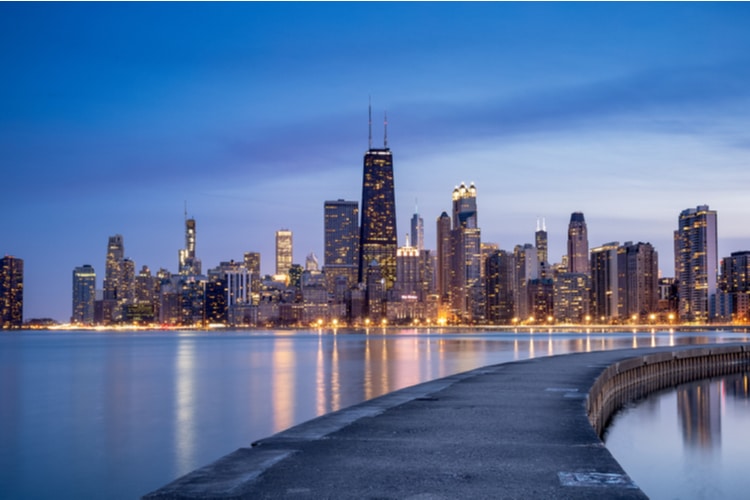 The Illinois Gaming Board reported a record monthly sports betting handle of $867.5 million for January, moving the state’s all-time legal wagering within $250 million of the $10 billion mark.

The handle was the 14th-highest monthly amount reported of any state in the post-PASPA era that started in June 2018, bettering the Illinois mark of $840.4 million established in October. Illinois has three of the top 20 all-time totals, even with only six mobile operators accepting wagers.

BetMGM, which launched Saturday to coincide with the start of remote registration in the state, could give the Prairie State a chance at a $1 billion handle in March with the NCAA Tournament likely to spur more action.

The Illinois board reported an adjusted gross revenue total of $66.2 million, which ranks 11th nationally and within the state itself is behind only the $79.3 million generated by operators in November. Overall gross gaming revenue totaled close to $65.3 million as Caesars posted a loss on the mobile side and Casino Queen did likewise for retail wagering.

The adjusted revenue was nearly double December’s amount of $33.7 million, as the 7.6% hold in January was more than 3 full percentage points higher than the previous month. Taxes from operator revenue came close to $10 million, as Illinois became the third state along with Pennsylvania and New Jersey to surpass $100 million in tax receipts from sports betting in the post-PASPA era dating to 2018.

Illinois was the fastest to the $100 million benchmark of the three states, doing so in 22 months from launch compared to 27 for Pennsylvania and 32 for New Jersey. Illinois’ tax rate of 15% on adjusted revenue is less than half that of the Keystone State and slightly higher than what the Garden State levies for online revenue.

Cook County received $754,574 from the additional 2% tax on revenue from wagers placed in Chicago and the surrounding areas.

The Illinois report increased national handle reported for the first month of the year to nearly $9.3 billion, with Arizona the lone state yet to provide figures. It would take a notable effort from the Copper State to get the total to $10 billion, considering it set its all-time high for handle in December with just shy of a half-billion.

While DraftKings remained atop the Illinois handle leaderboard with close to $283.7 million, that was a slide of 2.3% compared to December. FanDuel significantly closed the gap of nearly $60 million between the two from the close of 2021, as its handle surged 12.4% to an all-time high of $259.1 million.

FanDuel was not alone among operators posting record handles in a busy January. BetRivers improved 16.5% to an all-time monthly high of $135.8 million, and PointsBet had the highest month-over-month percentage increase among the sextet of sites in January as its handle reached a record $74.5 million, 54.6% better than December.

Barstool Sportsbook posted a 13.9% increase in clearing $60 million for the third time in four months, while Caesars ticked 9.7% higher to $15 million.

Caesars, though, posted the largest single-month loss of any mobile operator in Illinois history, as bettors came out nearly $800,000 ahead. It was the third time Caesars/William Hill posted a loss in 17 months of operation.

FanDuel again rode the strength of its parlay offerings to the top revenue spot for January, claiming more than $25.5 million. Nearly $17 million of that came via parlay wagering and the 22.1% win rate on those bets.

DraftKings also reached eight-figure revenue totals via parlay wagering, with the $10.2 million accounting for more than half its $19.4 million overall revenue. BetRivers totaled $10.2 million in revenue as football and basketball wagers accounted for more than $7 million of that total, compared to the $815,000 via parlays.

Despite the sizable increase in handle, PointsBet’s revenue climbed just 5.1% to nearly $4.3 million. Barstool’s $3.9 million in revenue was its highest since the $5.1 million accumulated in its first month of operation in March 2021, and it represented a 65.2% increase from December.

For overall revenue numbers by category, parlays accounted for more than half that amount at $33.5 million, with the hold a sturdy 18.2%. Basketball and football were the other notable revenue drivers at $12.6 million and $10.9 million, respectively, while tennis emerged as a surprising fourth with just shy of $3.3 million.

10 of the top plays that helped Cooper Kupp win a triple crown, OPOY, and the Super Bowl.@CooperKupp | @RamsNFL pic.twitter.com/BGCX76FqQN

Located near the Missouri border in East St. Louis, Casino Queen appears to have taken a beating from those still loyal to the Super Bowl champion Rams. The retail tether to DraftKings paid out over $1 million more than the $5.8 million in football wagers it accepted, contributing to an overall monthly loss of $445,588 in January.

It was the largest monthly loss for any retail sportsbook recorded in the state since launch and more than double the $204,095 Grand Victoria Casino in Elgin lost in December. Casino Queen, however, did smash its all-time monthly high for handle with more than $9.5 million.

Rivers Casino remained the bell cow for retail handle, but its $11.8 million in wagers was a steep 30% falloff from its record $16.8 million in December. The overall retail handle was a record $38.4 million as operators reported nearly $2.8 million in adjusted revenue. The gross retail revenue was more than $2.9 million as Grand Victoria, Hawthorne Race Course, and Hollywood Casino in Aurora were allowed to carry over losses from December.