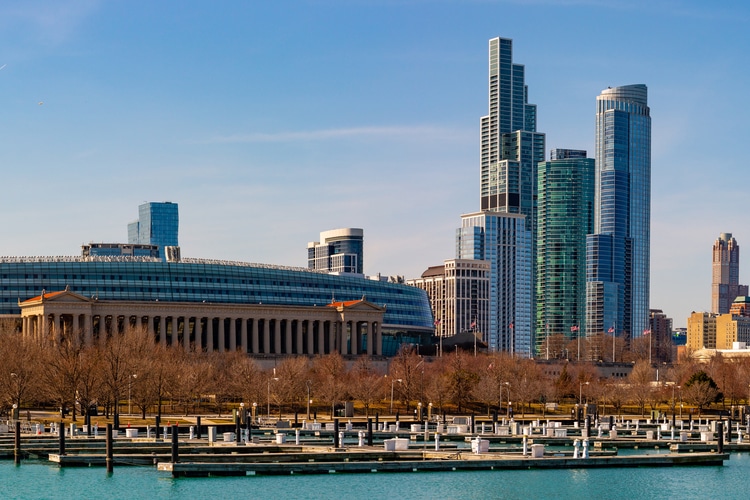 Illinois furthered October’s run of record-smashing with regards to sports betting handle nationwide, entering the top 10 all-time in the post-PASPA era after the Illinois Gaming Board on Wednesday reported a traditional handle of $840.4 million.

The figure, which is the eighth-largest handle reported since sports wagering has been legalized on a state-by-state basis beginning in 2018, pushed the overall national handle for October to $7.06 billion. Arizona, which has yet to report figures since beginning sportsbook operations in September, is expected to add a final notable chunk with its first full month of action when that revenue report is released.

The Land of Lincoln also set its all-time monthly high for operator revenue at just shy of $52.6 million, resulting in a 6.26% hold. Illinois became the third state, along with New Jersey and Nevada, to surpass $50 million in operator revenue in a month, and it recorded the 15th-highest all-time figure post-PASPA. Lastly, Illinois joined New Jersey, Nevada, and Pennsylvania as the only states to clear $7 billion in all-time handle.

The record operator revenue led to an all-time high of $7.9 million being deposited into the state tax coffers, with Cook County receiving a separate $570,237 in receipts from the 2% tax levied on revenue generated from wagers placed within the county. Illinois has collected more than $61.8 million in taxes from sports wagering for the year, and more than $80 million since the first wagers were accepted in March 2020.

When states’ October numbers began pouring in nationwide, it was quickly obvious that two additional weekend days of wagering coupled with the fervor of NFL wagering — both as an individual sport and packaged via single-game parlays or other parlay wagers — would enable the month’s handle to dwarf September’s and make the celebration of crossing $5 billion in monthly handle for the first time a short-lived one. Illinois lived up to those trends on both counts, as it had $523.5 million in overall football and parlay handle, representing nearly 62% of the monthly total.

For the sixth straight month, DraftKings was Illinois’ top online operator for handle while FanDuel kept claiming honors for revenue. The spread between the two titans was far more pronounced in October, as DraftKings became the first online operator in Illinois to clear $300 million in handle at $310.5 million, which accounted for nearly 40% of all online and mobile handle.

FanDuel was a distant second at $236.4 million, which was almost 30% market share, as it cleared $2 billion in all-time handle in the state. BetRivers took the final podium spot at $119.3 million. It was the first time BetRivers reached nine figures since January, and it posted its second-highest handle since launch. Barstool Sportsbook had a 53.2% month-over-month increase to a record $68.7 million, while PointsBet narrowly missed an all-time high with just shy of $60 million.

Caesars continues to severely lag behind the other five operators. Its $12.7 million handle was a 56.7% increase from September and was its second best in Illinois, but it also represented just 1.6% of the $803.4 million wagered online.

On the revenue side, FanDuel generated close to $23.2 million in revenue — an all-time high for any operator in Illinois — while easily outpacing DraftKings at $12.9 million. DraftKings could take solace, though, in nearly doubling its revenue compared to September, despite a 4.15% hold.

FanDuel continues to win at the parlay game

To put FanDuel’s ability to generate revenue from parlays in perspective, at least as it pertains to Illinois, consider that its $15.3 million earned from that category represented nearly two-thirds of its overall revenue. FanDuel posted a 19.65% hold on $78 million in wagers.

DraftKings also had more than half of its revenue originate from parlay wagering at $6.6 million, though its hold was a more modest 9.31% on $71.2 million. Overall, revenue from parlays came to nearly $26.6 million — the most in state history — on a 13.9% hold as the handle was also a record at $190.7 million.

Among sports, football wagering provided the most revenue to operators at more than $9.1 million, though the hold was just 2.74% from the $332.8 million bet on pro and college football. Baseball ranked second with more than $6.7 million, followed by tennis ($3.3 million), basketball ($2.2 million), and soccer ($2.1 million).

While debate in the Chicago City Council continues over the proposed ordinance that would lift the home rule ban to allow sports betting in Chicago’s stadiums and arenas, Rivers Casino continues to dominate the retail scene just outside the city limits in Des Plaines. Nearly $16.8 million was wagered there in October, an all-time record at any location, and the $37.1 million bet in person statewide was also an all-time high in addition to being a 43.7% improvement on September’s $25.8 million.

Retail revenue slipped 7.8% to $2.2 million, however, as the retail win rate plunged 3.33 points to 5.95%. Hollywood Aurora, which got a visit from Barstool Sports founder Dave Portnoy during October, was the only retail book to post a double-digit percentage hold at 11.67%, as it collected $219,664 on nearly $1.9 million wagered.