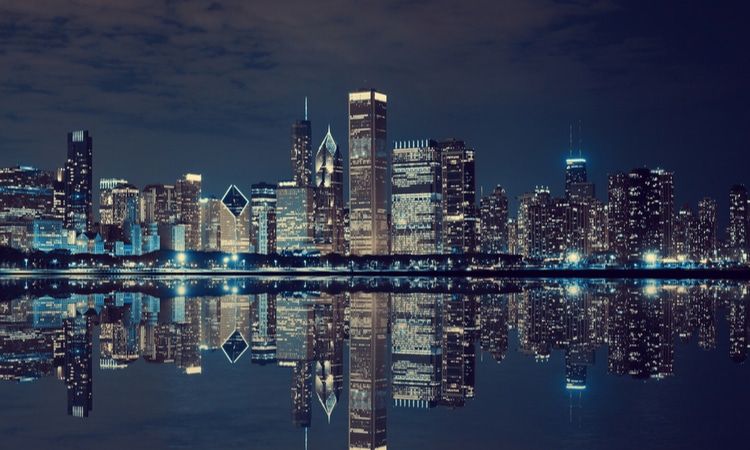 Photo by MaxyM via Shutterstock

“Lists of Applicants & Licensees will be posted when available.”

It is a single line on the Illinois Gaming Board’s official website listed in a few places pertaining to sports betting for permits and licenses, but it took on greater importance earlier this month when the state’s gaming agency released the applications to be submitted for its three available online-only licenses.

The applications cannot be accepted for consideration by the IGB until Dec. 3 at the earliest, the date that marks the end of the 540-day provision in the gaming expansion bill from when the first retail master sports wagering owner’s licenses were issued in June 2020. After that, according to the bill Gov. JB Pritzker signed into law in June 2019, the board must announce “the winning bidders for the initial competitive selection within 630 days after the first license is issued under this Act.” The bill, however, also allowed the IGB to extend that time frame at its discretion.

With only six operators currently accepting mobile wagers in a top-three market nationally for handle — Illinois has topped Pennsylvania for five months running, in addition to edging out Nevada for second in April and May — there is still room for growth, which means more potential operator revenue and more potential tax revenue for state government.

There are still many avenues to enter the Illinois sports betting market, but the online-only license offers remote registration for potential bettors in the Chicago area — a vital lifeline for success given that in-person registration remains in effect statewide until the first online license is issued.

You can’t tell the players without a scorecard

Let’s start with the current state of play. BetRivers is tethered to Rivers, DraftKings to Casino Queen, Barstool Sportsbook to Hollywood in Aurora, and Caesars to Grand Victoria. Both horse racing tracks are accounted for, with FanDuel rebranding Fairmount Park and PointsBet operating through Hawthorne Race Course. Both are in the early stages of expanding to racinos.

Right now, FanDuel, DraftKings, PointsBet, Rivers, Barstool, and William Hill are live in Illinois. Several books are hoping to gain access to the state. When the state again required new users to register in person, this was seen as something that helps Rivers and hurts others.

That leaves six of the state’s 10 casinos with the technical capability to offer mobile wagering. Two venues — Argosy Casino Alton and Harrah’s in Joliet — have known market-access deals with Unibet and theScore, respectively, and both continue to pursue those respective paths per company spokespeople. A third, Jumer’s in Rock Island, is expected to be tethered to Bally Bet, since Twin Rivers purchased the Quad Cities-based casino last October as part of its massive nationwide expansion and rebranding.

WynnBET has market access to Illinois, but has not publicly disclosed its connection, leaving Par-A-Dice Casino in East Peoria, Hollywood in Joliet, and Harrah’s in Metropolis as potential landing spots. Par-A-Dice, however, has long been expected to have BetMGM as its mobile skin via its Boyd Gaming connections.

Both BetMGM and Unibet currently are in the applicant queue for Management Services Provider licenses, which would allow them to offer mobile wagering through casinos if they are granted a temporary operating permit similar to other operators. That process, though, has moved at a slow pace: The IGB listed BetMGM’s application date as Sept. 4 and Unibet’s as Nov. 16 on its official website.

The state’s gaming agency has plenty on its plate in addition to sports wagering, most notably the extensive vetting process that comes with license applications for the six locales in Illinois permitted to build new casinos as part of the gaming expansion bill. On the plus side, the IGB allows for operators in the Management Services Provider license queue to also apply for the online-only license. There are also seven sports facility sports wagering licenses available that have yet to be formally applied for.

With all these moving parts, figuring out who will be submitting an application and putting aside $20 million for the licensing fee that comes with IGB approval could prove a fool’s errand. But it is still worth the speculation and conjecture given the potential upside to be realized.

BetMGM should be first to apply

Peoria may be a measuring stick of potential Broadway success, but East Peoria is not the place for BetMGM to find a groundswell of bettors to register for a mobile app. A three-hour drive from Chicago, Par-A-Dice Casino is actually closer to Burlington, Iowa — and the Hawkeye State already offers remote registration.

BetMGM, which is also the biggest name not operating in Illinois, has carved out significant market share in other Midwest states. In Indiana, it has been a consistent third to DraftKings and FanDuel for a year and generated more than $20 million in revenue and nearly $240 million in handle through the first seven months of 2021. The latter figure represents 14.6% of the Hoosier State’s online handle.

In Michigan, BetMGM has a strong mobile presence — aided by its long-standing brick-and-mortar casino in Detroit — and has pushed DraftKings for second in handle. BetMGM has averaged $55.8 million in monthly handle since the state’s simultaneous launch in January, good for 23.2% market share.

BetMGM also has shown the ability to expand its marketshare among that second tier of operators. It entered Indiana in February 2020, five months after Rivers, passed Rivers during the summer as the sports schedule ramped up, and maintained its market share in a state with 13 mobile options.

Rivers has been a consistent third in Illinois since DraftKings and FanDuel began operating at full throttle, all aided by Pritzker’s repeated renewals of Executive Order 2020-41, which suspended in-person registration through the worst of the COVID-19 pandemic. BetMGM will not get that benefit, which makes applying a no-brainer in order to have an opportunity to grow its customer base.

There always seems to be one wild card when trying to forecast these events, and Penn National Gaming nearly created it earlier this month with its $2 billion acquisition of theScore. Penn already has one operator live in Barstool, the market-access agreement with Unibet for the Argosy, and now theScore, which has its market-access deal with Harrah’s in Joliet.

There is another casino in Joliet, located six miles away; conveniently, it is run by Penn National (Hollywood Joliet). With theScore sticking to its path via Harrah’s, it means Hollywood Joliet could be a holding spot for Penn should it consider further expansion.

While Barstool Sports founder Dave Portnoy is the wildest of industry wild cards, his social media reach in Chicago via “the Stoolies” and its tether in the state’s second-largest city via Hollywood Aurora make pursuing an online-only license potentially self-defeating economically. Part of Barstool’s success comes from its growth without needing the traditional television ad spend, which comes at a premium in the third-largest market in the country.

Also, Barstool has flank coverage of Chicago to the east via Ameristar Casino just over the state line in Indiana. Its combined handle from Illinois and Indiana is nearly $200 million, a promising start considering the launches were in March in Illinois and May in Indiana.

While Caesars already is taking wagers in Illinois, it is languishing last among the state’s six mobile options. It has cleared $10 million in monthly handle just once since launching last September, and Barstool is already on the verge of doubling Caesars’ overall handle despite not going live until early March.

Caesars has begun accepting parlay wagers, which has been a significant driver of handle in Illinois and should provide a boost. There has been at least $100 million worth of parlay wagers in each of the last four months among the other five operators, and that figure will spiral higher during the NFL season, when Caesars can also leverage its status as an official partner of the league.

Additionally, the license fee should not be a constraint, since CEO Tom Reeg stated previously that Caesars has money available to spend on sports wagering and is willing to do so. That is evident in the new “We Are All Caesars” national ad campaign rolled out recently.

Chicago’s population of nearly 2.8 million makes filing an online-only application something worth considering regardless of operator, even with its casino tether less than an hour from the city in Elgin. Additionally, Caesars as a company could generate some goodwill with the state, considering Reeg is already on record saying it likely will not bid for the downtown casino license the city currently is accepting proposals for.

Though only accepting sports wagers in four states — Colorado, New Jersey, Pennsylvania, and Michigan — FOX Bet makes sense as a potential applicant, depending on its confidence in Illinois being able to offer online casino gaming in the medium or longer term. Three of the four states where FOX Bet (part of The Stars Group) operates also offer iGaming (Colorado does not), and Illinois legislators have begun kicking the tires on it as a potential source of tax revenue.

But reaching that endgame will be challenging given the statewide popularity of video game terminals (VGTs), which are a vital source of income to bar and tavern owners. The 40,000-plus VGTs across Illinois have generated more than $400 million in state tax revenue this year, almost four times greater than the nearly $110 million from the casinos when not including sports wagering, and that is without availability in Chicago.

Also among the Nevada-based gaming corporations not expected to submit a bid for the downtown Chicago casino license, WynnBET appears to be in a somewhat similar situation to BetMGM in terms of having market access in a market not named Chicago.

The potential landing spot of Metropolis could draw business from Kentucky, whose bettors have been frustrated in their state’s start-stop efforts to legalize sports wagering. They also do not have to worry about Illinois’ current in-state ban on wagering on college teams, since they can bet on their Wildcats across state lines.

An online-only license also makes sense for WynnBET beyond Illinois by giving it a longer “border” of remote registration to attract Kentucky residents — something it started with its retail tether in Indiana via Rising Star after launching mobile operations there in April.

What about the big boys?

Though FanDuel and DraftKings may be on the other side of the state in relation to Chicago for their mobile tethers, they are anything but out of mind based on monthly revenue reports. The eternal rivals are 1-2 in both handle and revenue, DraftKings atop the former and FanDuel the latter. If either or both really wanted to pony up the $20 million for this license, they could, but it would make little sense given their rebranding routes for entry into Illinois.

Additionally, both are making physical in-roads into the Windy City to remain at the first touch of bettors’ smartphones. DraftKings continues to make progress through its partnership with the Chicago Cubs to build a sportsbook at iconic Wrigley Field, and received a key commission approval for that project earlier this month.

FanDuel reportedly has plans to have a sportsbook at the United Center, and logistical movement on that front from the city’s side began last month when Alderman Walter Burnett, whose 27th Ward includes the home of the Bulls and Blackhawks, introduced an ordinance to lift the city’s “home-rule” ban that prevents construction of sportsbooks in Chicago.