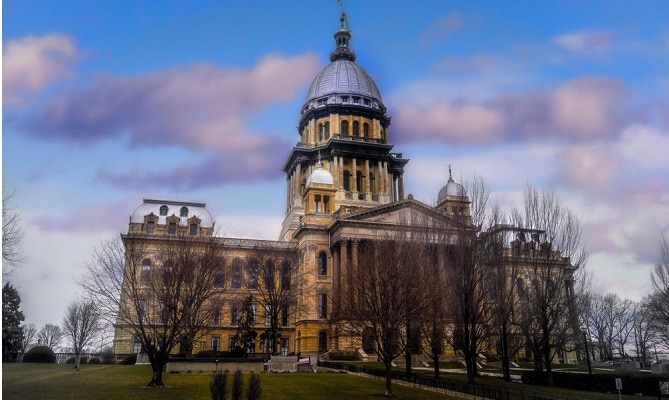 The state of Illinois took a major step forward toward sports betting after the governor on Wednesday called for the legalization as part of his budget address.

Illinois Gov. J.B. Pritzker, a Democrat, outlined his vision for many issues during a roughly 30-minute speech, but sports betting received a lot of attention.

“This budget also includes the legalization and taxation of sports betting,” he said (via a transcript from the Chicago Sun-Times). “Expansion of gambling is a perennial effort in this state, and often these proposals get bogged down in regional disputes and a Christmas tree approach.”

“But in those instances, we were talking about adding more riverboats or adding into other regions. Sports betting is different – this is a new market created by a recent U.S. Supreme Court decision. Every day we argue about ‘who’s in and who’s out’ is money that goes to other states and to the black market. I am calling on the legislature to take this up immediately so that Illinois can realize hundreds of millions of dollars, create new jobs, and bring sports betting into a regulated environment that will protect citizens from bad actors. If we do it this year and become the first state in the Midwest to move on this initiative, we can realize more than $200 million from sports betting fees and taxes in FY 2020.”

Multiple bills expected, but the governor knows what he wants

The governor’s urging to pass legislation bodes well for the state’s chances, but that doesn’t mean there won’t be a debate on how to implement the new offering. According to the state legislature’s website, there are several placeholder bills waiting to be filled out in the House. There’s a full-fledged measure, SB 176, that sits in a Senate committee.

The governor has specific ideas. Under his plan, mobile would be allowed. He wants 20 total sports betting licenses. They would pay a 20% tax on revenue.

He also wants a $10 million licensing fee for online sports betting platforms. It would cost just $5,000 a year to renew it.

“For the first five years of operation, sports wagering operators would be able to deduct a maximum of 90% of one-fifth of the initial license fee each year from the sports wagering tax,” the budget proposal stated. “This license fee and tax credit proposal will allow the state to accelerate an estimated $200 million in future tax revenue into fiscal year 2020.”

The sports betting public should expect legislative activity to heat up in the following weeks after the governor’s budget address. The window is not super long, however. The 2019 session for the Illinois General Assembly will adjourn on May 31.

Democrats have more power this session than they’ve enjoyed in more than 50 years. Pritzker’s party has huge majorities in both the House and Senate.