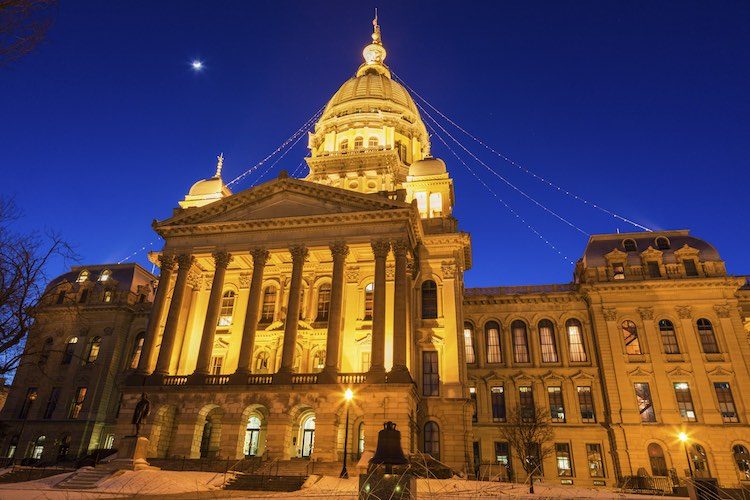 Sports betting is still alive in Illinois, although the bill that was voted out of the House Executive Committee in the early evening on Friday is, at best, unpalatable to many operators.

A 716-page amendment that was introduced Friday morning would essentially penalize potential mobile-only operators by giving bricks-and-mortar sportsbooks an 18-month head start. In addition to that, the bill includes a $20 mm licensing fee for mobile-only vendors, making Pennsylvania’s $10 mm licensing fee look like a bargain. The bill also mandates the use of “official league data” and prohibits betting on Illinois-based college sports.

Beyond the obvious concerns, the devil is truly in the details as the bill also would also prevent online/mobile sportsbooks from operating under their own branding for the first 18 months.

What exactly does that mean? Representative Bob Rita (D-District 28), who has been the torch-bearer for gaming in Illinois for several years, did his best to explain when asked by a committee member.

Using Caesars as an example, he said, “You can operate under a master license, but you have to be under the brand of the casino. Caesars has a (national) deal with DraftKings, so (DraftKings) can operate under that umbrella. This was a way to give Illinois companies a ramp into this … and it gives the other companies the opportunity to operate without boxing them out.”

FanDuel has a similar national deal with Boyd Gaming, which operates the the Par-A-Dice Hotel Casino in East Peoria, so they may be similarly situated. But it’s confusing how things would actually work under an umbrella and how DraftKings or FanDuel would have any room to actually operate.

The new language in Amendment 2 appears to be just another iteration of the “penalty box,” which has taken center stage of late. By way of background, the “penalty box” was requested by billionaire Rivers Casino owner Neil Bluhm, who has accused DraftKings and FanDuel of illegally operating daily fantasy sports businesses in Illinois over the last few years. But the only difference between this amendment and one being discussed earlier in May is that DraftKings and FanDuel aren’t specifically named.

Given the pair’s initial reaction to the original penalty box — a YouTube ad ripping Rivers Casino and the threat of a lawsuit should they be penalized under the new law — if Amendment 2 becomes law, one or both companies may take legal action.

Another detail that would only impair the market potential? Consumers would be required to register in-person for mobile sports betting accounts during the first 18 months of legal sports betting in Illinois. This in contrast to New Jersey, where bettors can avail themselves of any legal sportsbook from anywhere in the state, without having to visit in person.

Friday and the weekend ahead

Entering Friday, it seemed a sure bet that one way or the other, the issue of sports betting would be resolved by the end of the day, which was also the scheduled end of the General Assembly session. But at about 2:30 p.m. in Illinois, it was announced that the House would extend its session until Sunday. The Senate did the same. SB 690 is on the House calendar for a second reading Saturday. The session is scheduled to start at 10 a.m. CT.

To quote a source, we might all want to conjure U2’s song, “Sunday, Bloody Sunday.”

The extension changes the rules. SB 690 now requires a supermajority to become law — that means a three-fifths of members must vote in favor, 71 in the House and 36 in the Senate.

It’s baked into a revenue bill to raise money for vertical capital, and the vote threshold after this evening becomes 3/5 as opposed to a simple majority. So, it’s pretty critical to get it done this evening. https://t.co/PD89Bpmr1n

BREAKING: Illinois House votes to pass the spending part of the budget. House adjourns until Saturday at 10am.

So it appears things move on to Saturday and Sunday with a three-fifths vote required.

There’s no question that lawmakers could use the extra time with regard to sports betting. Like many other issues, sports betting legislation has morphed several times during the week. During the executive session, several lawmakers complained about the mountain of material they were expected to digest and act on in a single day after months of dilly-dallying. Sports betting was no different — the latest amendment featured changes (within a much greater bill about other issues) to everything from the tax rate to license fees to the branding twist mentioned above.

One industry onlooker has consistently referred to Illinois’ sports betting legislation as a “race to the bottom.” Operators would likely agree.

Here’s a look at other key features of the amendment:

Missing from the bill? The “integrity fee” or “royalty.” Stakeholders have been fighting across the country to quash a payout to the pro leagues, but there’s still plenty in this bill making it highly unpalatable to many operators — with the high fees, online delay and data requirement.