Stakeholders To Illinois: We Can’t Show You That Much Money

New amendments call for 25% tax rate, licensing fees in the millions, and payout to pro leagues 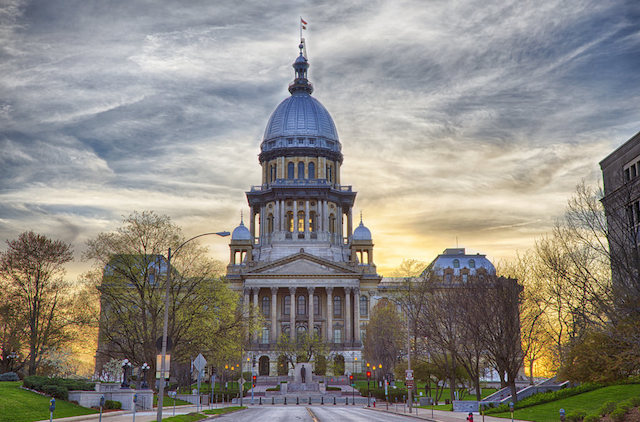 It would likely be fair to say that the only people who left Wednesday’s Illinois sports betting hearing truly happy were representatives of the professional sports leagues. And even they wanted more.

Three hours before the subcommittee hearing was set to start, torch-bearer Mike Zalewski (D-District 23) filed two amendments — both with a 25 percent tax rate on operator gross sports wagering revenue, and one decidedly professional league-friendly. Zalewski’s proposed Amendment 2 not only limits the number of sports betting licenses for both physical and online sportsbooks, it calls for a “royalty” to the professional leagues, mandates the purchase of official league data, and imposes a stunning $20 million licensing fee for online sportsbooks. Zalewski filed both as amendments to HB 1260, which appears will be the latest sports betting vehicle. The previous bill, HB 3308, wasn’t referenced.

Needless to say, stakeholders at the two-hour hearing pushed back hard while representatives from Major League Baseball and the National Basketball Association attempted to convince the room that only if the leagues are cut into profits, will sports betting reach its potential in Illinois, the sixth most populous state in the U.S.

“We support the official league data mandate,” said MLB Senior Vice President and General Counsel Bryan Seeley. “Amendment 2 also contains the provision that leagues receive from gaming companies .20 percent on Tier Two wagers. We’d prefer to see that on all wagers, but we appreciate that. I do think a royalty to the leagues creates incentive to grow the pie.”

By “Tier Two” wagers, Seeley is referring to in-game or in-play wagers, or any bet not made prior to the start of the game.

The NBA’s Scott Kaufmann-Ross, vice president and head of fantasy and gaming, was equally as enthusiastic. “It just stands to reason that sports betting will be more successful in the state, and more revenue will be generated if the leagues are partners, and that’s just what we are trying to achieve.”

Committee members weren’t so sure and several questioned the pro leagues, pointing out that no state has legalized sports betting with a royalty and that Tennessee’s bill is the only one with a data mandate. That bill will is expected to become law, though Governor Bill Lee says he won’t sign it.

Stakeholders were equally as put off by Zalewski’s proposed amendments.

“The tax rate is extremely high,” said Tom Swoik, executive director of the Illinois Casino Gaming Association. “And we are opposed to being forced to do something with the leagues.”

The wait is over. Indiana has become the 10th state to legalize sports betting. On Wednesday, the Indiana sports betting legislation became law after Gov. Eric Holcomb signed the measure.https://t.co/xzPs0ZUkwr

Swoik also pointed out that two of Illinois’ key border states, Indiana and Iowa, were on the cusp of legalizing — Indiana’s governor signed sports betting into law Wednesday, possibly during the hearing — both with tax rates below 10 percent, much more reasonable licensing fees and no nod to the professional leagues. Yet lawmakers pushed him and Paul Gaynor of Midwest Entertainment to admit that Illinois’ bigger market would mitigate the proposed high cost of doing business.

“If we’re paying four or five times the taxes, our odds aren’t going to be as good,” Swoik said. “We’re opposed to being required to use official league data and that we’ll be required to make a 0.2 percent payment to the league, it’s just too much money.”

(Editor’s note: An earlier version of this story incorrectly attributed this comment to Gaynor.)

Zalewski went on to say that he felt it was wise to start with higher, rather than lower tax rate, but Swoik reminded him that taxes on casino gaming has been changed multiple times.

Gaynor only commented on the portion of Amendment 2 that would essentially penalize FanDuel and DraftKings, and clearly didn’t feel prepared to comment on the amendments in full.

Proposed Amendment 2 “prohibits any entity that participated in unlawful gambling operations from receiving any type of sports wagering license for a period of three years.” The provision is aimed at FanDuel and DraftKings, both of which operate fantasy sports in Illinois. Some stakeholders have argued that it is illegal to operate DFS in the state and the two flaunted the law and did it anyway.

Suffice to say, there was plenty that potential operators didn’t like on Wednesday. Representatives from horsemen’s groups, the Illinois Licensed Beverage Association and Illinois Gaming Machine Operators Association were aligned, in large part, with their casino counterparts, arguing that the taxes and fees were too high to make it possible to do business in the state.

Of particular concern to the horse-racing groups is a provision in Amendment 1 that would allow race tracks to operate a sportsbook at the track and EITHER online or at three of their authorized OTBs. Like the casino representatives, the horsemen were flummoxed by the cap on the number of available licenses in Amendment 2. According to the amendment, only seven licenses would be available to brick-and-mortar facilities and three to online facilities. Those licenses would cost $15 million and $20 million, respectively, making them the priciest in the nation.

“How will you determine who you will give the licenses to?” asked Bob Molaro of Hawthorne racetrack. “How would that work? You say whoever would apply for it first, but I don’t understand how that would work.”

Lawmakers don’t really, either, as Zalewski responded by saying the provision is “curious” and would need to be sorted out.

Colleges oppose betting on their sports

The only person testifying who didn’t take issue with the tax rate, royalty, or number of available licenses was University of Illinois Athletic Director Josh Whitman, who was representing 12 of Illinois’ 13 Division I universities. As a whole, they oppose sports betting on collegiate sports. The colleges want no part of sports betting, fearing that it will put undue pressure on athletes.

“Would there be additional costs” associated with sports betting” Whitman asked. “Yes. Do we want money for that? No. We felt it didn’t make sense to be asking for money for something we oppose.”

That said, the NCAA would be the official data provider of any college sports data, and Zalewski finds the NCAA’s position and Illinois’ colleges positions at odds. Amendment 2 would prohibit sports betting on collegiate events involving Illinois teams in Illinois. But Whitman says that’s not enough.

“What we need to avoid is for every athlete who drops a pass or misses a free throw, for everyone in the stadium to look at each other an wonder if he did that on purpose,” Whitman said. “That’s when the integrity of the game is lost. … The in-state betting (prohibition) really does not solve any of our problems fundamentally.”

The upshot of Wednesday’s hearing is that lawmakers still have plenty to do — an not much time to do it in. Zalewski is still hoping to get a sports betting bill onto Governor J.B. Pritzker’s desk before the summer recess.