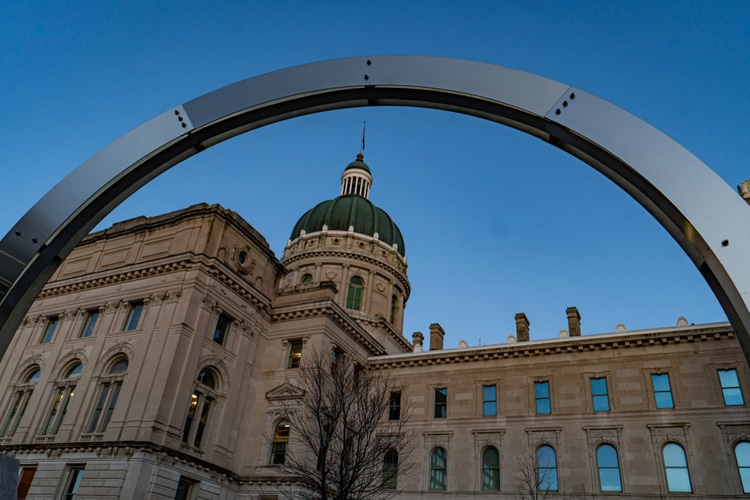 The Indiana Gaming Commission reported February sports wagering revenue of nearly $17 million on Friday, barely more than half of January’s total, as it appears Super Bowl wagering along the state’s eastern border contributed to another tough month for operators.

The revenue figure included a downward adjustment following promotional payouts of more than $5.4 million from operators across the state, as gross gaming revenue totaled $22.4 million. The February adjusted revenue total was down 52.3% from the previous month, when a record $500 million handle helped create $35.6 million in revenue.

Handle slipped 18.2% in February to $409.1 million, which is still the fifth-highest monthly total of 30 since the Hoosier State began accepting wagers. The 4.2% hold, however, is the lowest in state history, with December’s 5.6% win rate now a short-lived record.

Indiana received more than $1.6 million in tax receipts, becoming the eighth state in the post-PASPA era to surpass $50 million in taxes generated from sports wagering, along with Pennsylvania, New Jersey, Illinois, New York, Nevada, Oregon, and Tennessee. Oregon is the outlier of those states in being the only one currently run by the state lottery, but the sportsbook is operated by DraftKings.

DraftKings makes it two months in a row

After finishing second to FanDuel in revenue for each of the final eight months of 2021, DraftKings made it back-to-back months as the top mobile revenue generator while maintaining its undisputed spot atop the handle rankings. DraftKings beat the statewide hold at 6%, claiming more than $7.3 million from $121.5 million wagered.

FanDuel’s hold was more in line with the overall state number at 4.6%, finishing with $4.9 million in revenue from $107.7 million in bets. DraftKings has accrued nearly $158 million in operator revenue in Indiana since launch, nearly $10.6 million more than its closest rival.

BetMGM continues to keep a firm grip on third for both handle and revenue, posting a 7.4% win rate to reap nearly $3.9 million from close to $52.4 million wagered. Caesars and Barstool Sportsbook were the only other mobile operators to clear $1 million in revenue, with the former just shy of $2 million on $45.1 million handle and the latter bucking the low hold trend at 9.7% to collect more than $1.3 million from $13.8 million in bets placed.

PointsBet rounded out the top five for handle at $14.3 million as the Australia-based sportsbook surpassed $200 million all-time in Indiana, and BetRivers was close behind at $13.9 million. The two flipped spots for revenue, with BetRivers sixth at $736,301 and PointsBet seventh with $579,874.

"He made guys, who I know are fast, look slow." – @FieldYates on Ja'Marr Chase's rookie season highlights pic.twitter.com/Y7wDF93X0S

The Indiana Gaming Commission does not publish revenue by sport but does publish handle for certain sports. It reported just over $30 million handle for football in February, and surely an overwhelming majority of those wagers came on Super Bowl LVI — with a large percentage of those Super Bowl wagers likely being on the Cincinnati Bengals. The Bengals lost the game but did cover the spread, potentially contributing to a set of results that slightly favored the betting public — or at least Bengals fans from Kentucky and Ohio who crossed into Indiana to make some of those wagers.

The retail win rate was 4.3%, the lowest in the state in a month unaffected by the COVID-19 pandemic since a 4% hold in February 2020. Four of Indiana’s 14 retail sportsbooks finished in the red in February, with three of them — Indiana Grand, Rising Sun, and Belterra — all located close to the Kentucky border.

Indiana Grand took the biggest loss of the three as bettors came out $137,822 ahead on $577,160 wagered at the horse racing track. Combined losses at Rising Sun and Belterra totaled $24,240 as both were on the losing end overall for the second straight month. The other retail book to post a monthly loss was on the other side of the state, as Ameristar Casino in East Chicago paid out $44,565 over the more than $3.9 million wagered near the Illinois state line.

Hollywood Casino in Lawrenceburg, the state’s top retail book for handle, avoided a second straight losing month, but the state-high $428,406 in revenue marked Hollywood’s first back-to-back months without $1 million in revenue since May and June of last year.

Indiana Grand’s loss contributed to the state’s two tracks and three Winner’s Circle locations totaling just $201,309 in revenue from close to $6.5 million wagered. The 3.1% win rate from the five spots was the lowest of any month outside those strongly impacted by the pandemic.