by Brian Pempus
in Regulation, Sports 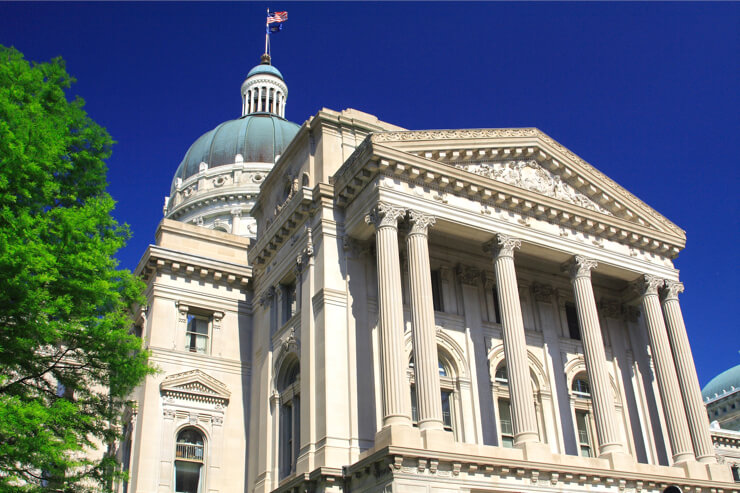 Sports betting is inching closer to the Midwest.

On Tuesday afternoon in Indianapolis, the Indiana Senate voted 38-11 to send a historic gambling expansion bill to the House. The legislation includes the legalization of sports betting in the Hoosier State.

The legislation, SB 552, is centered around riverboat casino relocations, and most of the debate this month was on that topic, but establishing an Indiana sports betting white market is also a key ambition of the legislation, sponsored by state Sen. Mark Messmer, a Republican, and state Sen. Jon Ford, also a Republican. The bipartisan bill had five co-sponsors in the Senate.

Messmer told his fellow state senators on Tuesday that it’s a “once-in-a-generation” piece of legislation.

The bill would allow traditional sports wagering at Indiana riverboats, racinos, and satellite facilities, as well on mobile devices.

Notably, the bill requires the use of official data from the governing body conducting a sporting event to determine the outcome of in-play wagers. There are no “integrity fees” (royalties) for the leagues in the bill, but the tax structure for the measure won’t be fleshed out until it works its way through the House.

However, a 6.75% sports betting tax rate has already been floated in the House. “We want to try to keep the rate low, so we can be competitive and draw in as much of the gray market as we can,” Ford told SportsHandle last month. “Nevada has been at 6.75% for quite a while … and that seems to work.”

It does work, as Nevada’s sports betting market has exploded in recent years, setting a new record for handle and revenue in 2018. Like other states considering sports betting, Indiana will likely consider a higher tax rate for revenues generated over sports betting websites and apps. There’s no indication yet on what that could be.

The legislation does give the leagues some power over which bets could be allowed.

The Indiana Gaming Commission “may act upon information received from a sports governing body in considering requests to prohibit wagering on particular events or to prohibit making wagers of a particular type,” reads a section of the massive, 130-page gambling bill. Regulators would weigh the interests of the leagues and the gaming industry.

Betting on Indiana college teams would be allowed under the proposed law. Gambling on eSports would be prohibited. Risking money on predetermined entertainment events like the Oscars was not addressed in the legislation. Oscar betting was recently controversial in the state of New Jersey.

Indiana’s legislative session ends on April 29, so we’ll know in the next handful of weeks what kind of odds the bill has in the House. There’s effectively a companion piece of sports betting legislation sitting in a House committee.

The state needs some sort of gambling reform package. The legislation is aptly titled, “Gaming Matters.”

Indiana had one of the worst-performing commercial casino markets in 2018. Gaming win of $2.1 billion was up less than half a percentage point compared to 2017, which came while gaming win nationally grew about 3%.

A 2017 sports betting study from Oxford Economics projected that an Indiana sports betting market with mobile wagering could see more than $5 billion in annual wagers and generate more than $370 million in taxable gaming revenue. Sports betting has the potential to dramatically grow the state’s stagnant casino gambling market.

Indiana’s sports betting market could grow to be larger than Nevada’s.

As for the benefits that sports betting could bring to table games and slot machines, Indiana is less optimistic. A fiscal analysis of the legislation claimed that the benefit to the other games would be negligible. Time will ultimately tell, but early results from the sports betting markets in New Jersey and Pennsylvania are suggesting the contrary.

Legal sports betting is currently confined to just eight states, with the activity not yet occuring in any midwestern state. Indiana isn’t alone in the region with regard to taking a public-policy look at regulating sports betting. Ohio, Illinois, Iowa, and Kentucky all are discussing sports betting this year.

Additionally, nearby Michigan, Tennessee, and Missouri are also contemplating sportsbooks.

At this juncture, Indiana is the safest bet among the aforementioned states to enact a sports betting law in 2019, but it’s likely that more than one crosses the finish line this year. As of Tuesday, the only state to finish its 2019 legislative session was Virginia (which made progress on its sports betting legislation).

Tax rate: To be determined by House

Use of “official league data” mandated?: Yes, in-game wagers only

Where the money goes: TBD