Indiana Sports Betting Legalization Up In The Air As Deadlines Approach 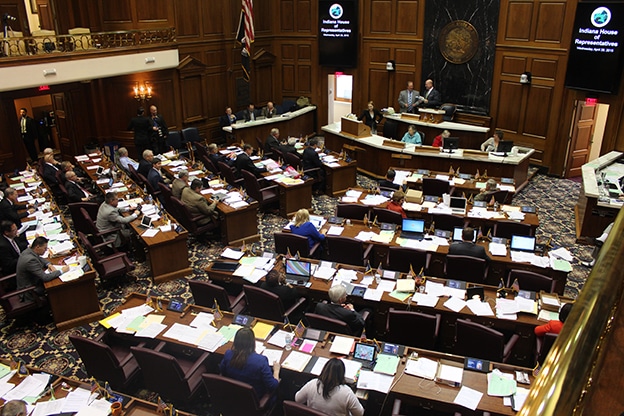 The floor of Indiana's House of Representatives

It appears that initial optimism for the prospect of legal sports betting in Indiana in 2019 may have been  misplaced, as Mario Kart obstacles and some reticent drivers crowd the path to passage.

On Feb. 26, the Indiana Senate passed by a 38-11 margin SB 552, a bill that goes well beyond sports wagering as it would impact riverboat casino relocations, allow construction of a new casino, and squash a rule capping the maximum number of licenses a single casino owner may possess. House lawmakers examining the 130-page bill are more focused on the latter issues, rendering sports betting at best a tertiary concern.

“I think that is going to be the big question,” Rep. Todd Huston (R-District 37) told US Bets of the bill’s prospects in the House. “Is the House ready to take on a major piece of legislation with all the moving parts? That will be the interesting question over the next two weeks. There’s a lot in this bill. There are a lot of pieces.”

House Speaker Brian Bosma (R-District 88) has highlighted some of his colleagues’ concern about gambling expansion through a bill that SB 552 co-sponsor, state Sen. Mark Messmer, has called a “once-in-a-generation opportunity.”

“It’s difficult to find a place where a large expansion like that can pass. I’m surprised it had passed the Senate,” Bosma said. “If there’s a new casino facility, I don’t know how anyone can argue that it’s not an expansion.”

Per the Indy Star, the biggest obstacle concerns the possible relocation of the Majestic Star Casino’s Gary, Ind. properties — one to downtown Gary and the other to Terre Haute. A representative for Gary’s district, Sen. Eddie Melton, is attempting to encourage it along.

There is widespread recognition that Indianans already are participating in an entrenched sports betting black market. That’s the case in every single state where sports wagering is currently illegal, which is most.

An attempt to pass a narrower bill, separate from SB 552, missed the crossover deadline at the end of February. That was House Bill 1363, first introduced on Jan. 14, which was referred to the Committee on Public Policy but didn’t advance.

Introduced by Rep. Alan Morrison (R-District 42) and two Republican colleagues, the bill called for legalization of sports wagering for licensed operators and mobile sports wagering statewide and would allow bettors to sign up in person or remotely.

It’s possible, but unlikely, SB 552 could be stripped down at this stage to remove the casino relocation provisions in the interest of legalizing sports betting.

“We are just now getting back and looking at Senate bills,” Huston told US Bets. “We’ll have to talk to the caucus. There are a lot of issues in SB 552. We’ll give it serious consideration. Right now, it’s too early to give a good prognostication on it.”

One deadline in play is April 9, by which time the bill must clear the committee stage. Later, Indiana’s legislative session concludes on April 26.