Partaking In The Madness — A Trip Inside Lucas Oil Stadium

The 12-5 upset fails to materialize, but taking the underdog and the points proves a winning play

INDIANAPOLIS — After watching my bracket stay (largely) intact for the first day of the first round, it was time for the highlight of this trip — witnessing a first-round NCAA tournament game. I had secured a reasonably priced ticket ($75) to see Creighton face UCSB at Lucas Oil Stadium in what looked to be a fairly well-balanced 5-12 matchup.

This would be my first NCAA tournament game in person since Dwyane Wade and Marquette were boat-raced out of the Superdome by Kansas in the 2003 Final Four in New Orleans. I still have nightmares of Nick Collison and Kirk Hinrich scoring at rates even five post-defeat Pat O’Brien hurricanes failed to erase.

It was also my second NCAA tournament game in Indiana. As a junior at Marquette, the nee Warriors were sent to the Hoosier Dome for a 5-12 game versus Bryant “Big Country” Reeves and Oklahoma State in 1993. That was a more respectable defeat, though my lasting image was Reeves wolfing down a tray of hot dogs in the post-game media room  next to coach Eddie Sutton and looking every bit the 7-foot, 280-pound hayseed.

After watching bettors sweat out First Four games at the Winner’s Circle, it would be interesting to see how it would play out at the arena. Would betting be prevalent? Would it be noticeable amid social distancing? Would it affect how the crowd roots? The answers to all these questions and more would play out in somewhat dramatic fashion.

One of the cool things about a city hosting a sub-region is the parade of colors on display ahead of and during games played. In Indianapolis, this took on a whole new level as supporters of the entire field appeared in the walk downtown to the stadium. Whether it was Rutgers, Abilene Christian, Drake, Missouri, Alabama, or any other team in the field of 68, there was a corresponding tee shirt, hoodie, hat, or mask that showed rooting interest.

With very limited attendance, the line to enter Lucas Oil Field was short. Social-distancing rules were in place throughout the waiting area, and there was a mix of UCSB gold and Creighton royal blue awaiting entry to the first of four games on the schedule for the day.

After getting into the stadium, I made the command decision to walk to my seat in the 500 section. I won’t say this was a mistake, but it also felt long as the ramps seemed to never end. They also seemed smaller in terms of width than other stadiums, but with the crowd far less than capacity, that did not matter all that much.

So after 10 minutes and being slightly relieved the operating concession stands were less than 100 feet away, I found my seat. And after not having an NCAA tournament last year, it felt like the best seat in the house.

Settling into my seat, it was time for the business end of this excursion — placing a wager. As a Big East backer who shares a kindred Jesuit spirit with Creighton, I placed a small bet on the Bluejays to cover the 7.5 points via DraftKings, though 5-12 matchups are notoriously tense affairs. Oregon State had already pulled off one 12-5 upset, though fellow 12-seed and Big East squad Georgetown was being thumped by Colorado as I made my way to the stadium. 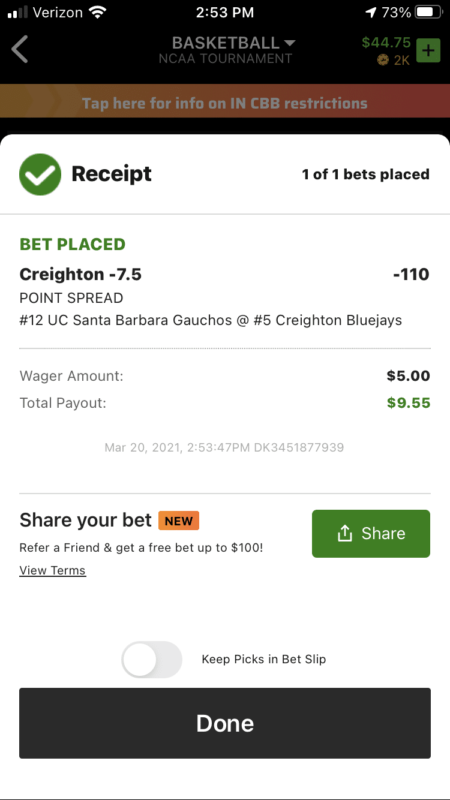 Creighton took an early 3-0 lead on the first basket, but UCSB settled in quickly and had the run of play for most of the first half. It was somewhat difficult to pick out players at times, but Gauchos guard Josh Pierre-Louis could be seen from anywhere in the city thanks to his fluorescent orange kicks.

The crowd appeared to lean slightly more to the Bluejays — a notable fan contingent was visible in the lower level — and chants of “de-fense” followed by a slap of the back of the seat in front of them were audible, but it was tight both ways.

During the last media timeout of the first half, I opted to try and play both sides with an in-game bet, taking the Gauchos +2.5 via BetMGM. I had picked Creighton in my brackets, but this game had a growing feeling of a game that would be decided in the final possession.

Marcus Zegarowski staked Creighton to a 34-30 halftime lead, his driving layup dropping through just before the halftime buzzer. In the second half, the Bluejays extended their advantage to 47-37 with 13:32 to play after Mitch Ballock converted a 3-point play. Things looked good for my original pick, to the point I tempted the betting gods via social media.

I managed to regret that tweet almost instantaneously as the Gauchos responded with a 13-2 burst. The crowd suddenly turned pro-UCSB, whether it be the combination of bettors taking the Gauchos and the points or just wanting to see a 12-5 upset — I had the former in a foursome next across from me, while the Gauchos fan section out of sight above was now making itself heard.

UCSB pushed its lead to 58-52 on a jumper by JaQuori McLaughlin with 5:40 to play, and by this point, Creighton not covering was a foregone conclusion. But the Bluejays rallied behind Zegarowski, who assisted on a 3-pointer by Ballock and dunk by Christian Bishop before hitting a 17-footer to cap a 9-0 burst and provide a 61-58 advantage.

Amadou Sow responded with a bucket and two free throws to put UCSB back on top, but his foul on Bishop with 16 seconds left would prove costly. The 57% foul shooter calmly sank both ends of the 1-and-1 to give Creighton a 63-62 lead. Gauchos coach Joe Pasternack opted to let his kids play out the end game, and Sow had a chance to be the hero, but his failure to go up strong contributed to his 5-footer falling off the rim.

Creighton’s Shareef Mitchell was fouled, and after he missed the front end of a 1-and-1, Brandon Cyrus’ heave from nearly three-quarters court was well off the mark. The Bluejays won and the Gauchos covered, which seemed like a fitting end for a fairly tight contest throughout.

Coming away with a split of my two picks felt like a deserved yet slightly lucky outcome — kind of like how the NCAA tournament even being played this year feels to a large extent.