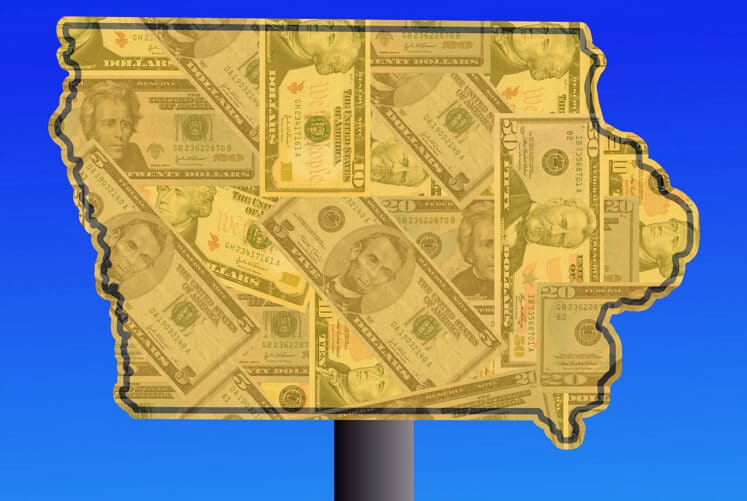 Iowa became the 11th state to surpass $1 billion in sports wagering handle for 2022 after the Iowa Racing and Gaming Commission reported wagers totaling $147.9 million for the month of May.

The Hawkeye State, which launched sports betting in August 2019, is also less than $100 million shy of becoming the 10th state to clear $4 billion for overall handle. The seasonal downturn has slowed that bid, as May’s handle was 16.6% lower than April’s $177.4 million in wagers accepted.

Despite the drop in handle, revenue ticked 1.9% higher from April to more than $12.6 million. The 8.5% win rate was the highest recorded since 9.3% in November 2020. It was also the first time the hold finished above the industry standard of 7% since last July.

The state collected slightly more than $850,000 in tax receipts for the month, and the $4.2 million collected the first five months of the year is about $1.1 million ahead of the same period in 2021. Year-over-year sports wagering handle is up 28.8%, while revenue was more than double the $6.1 million operators claimed last May, as this year’s win rate was more than three percentage points higher.

New mobile emperor in the cornfields?

May #SportsBetting numbers for #Iowa via IRGC, a 🧵. Mobile/Retail breakouts

The sportsbook formerly known as William Hill long enjoyed a commanding market share in Iowa after launch, as it had multiple retail locations that fed into its mobile presence while the state required in-person registration for mobile sports wagering access. That provision lapsed in January 2021, and Caesars has since seen its market share gradually eroded by the expected mobile sports betting suspects — DraftKings and FanDuel — but also BetMGM, PointsBet, BetRivers, and Barstool, to varying degrees.

May marked the third consecutive month DraftKings finished atop the pile in handle at $38.5 million, but FanDuel knocked Caesars down to third for the first time by accepting close to $31 million in wagers, while Caesars finished with $30.1 million. BetMGM was the only other mobile operator to reach eight figures with more than $16.4 million, which pushed it over $100 million in wagers for the year.

FanDuel did take honors for most revenue with over $3.7 million, as its 12% hold was its second straight month in double digits and third above 12% in the last 11 months. DraftKings claimed $3.1 million in operator revenue thanks to an 8.1% hold, and Caesars barely cleared $2 million, as its win rate was above 6% for the first time in 16 months.

BetMGM was a clear fourth in both handle and revenue with $16.4 million an $1.6 million, respectively, for a 9.7% hold. Barstool rounded out the top five in both categories, claiming more than $316,000 in revenue from close to $5 million handle. The overall mobile win rate of 8.6% was the highest since operators routed the public for an 11.2% hold in October 2020.

The gaming operator Wild Rose, with three sportsbooks in the state, took losses at its Jefferson and Emmetsburg locations in May. The Jefferson venue took the bigger hit, as bettors came out $32,009 ahead on slightly more than $191,000 wagered — the sportsbook’s biggest monthly loss in history. The Emmetsburg venue finished under for the second time in three months, paying out $5,730 more than the nearly $65,000 in accepted bets.

Ameristar in Council Bluffs took honors for revenue with more than $360,000 from just under $3 million wagered for a 12.2% hold. Diamond Jo’s brick-and-mortar sportsbook in Worth topped handle totals with more than $3.7 million, and also had a five-fold increase in revenue from April to more than $192,000, as its win rate surged from 0.8% to 5.2%.

Hard Rock’s Sioux City sportsbook was the only other venue among the 19 in the state to report a retail loss in April, paying out $2,528 more than the nearly $755,000 in wagers placed.