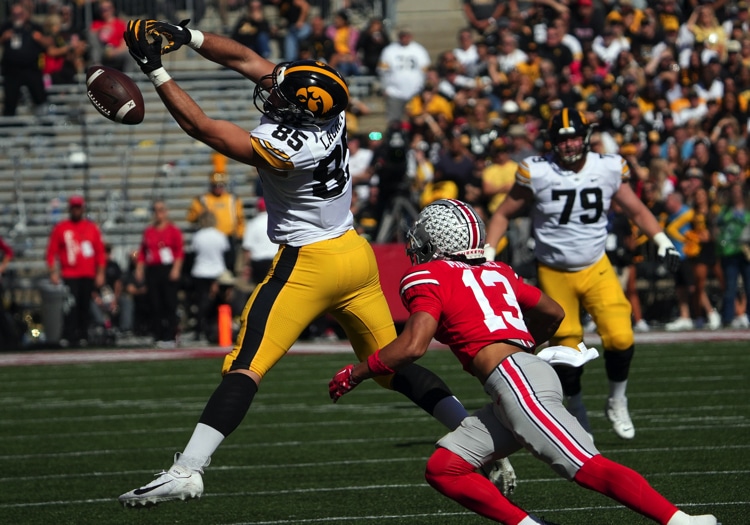 Forget three yards and a cloud of dust. Three points may be cause for a celebration.

Iowa and Northwestern square off Saturday, with the winner getting the prize of avoiding the cellar of the West Division of the Big Ten. The Hawkeyes (3-4, 1-3) at least have a tangible goal of becoming bowl eligible, though bowl committee members could be forgiven if they view Kirk Ferentz’s team as an option of last resort despite how well the fan base travels.

Northwestern (1-6, 1-3) is already playing out the string, with some wondering if coach Pat Fitzgerald is on the hot seat with 12 losses in his last 13 games dating to last season. The lone victory in that span came in the season opener in Ireland against a dysfunctional Nebraska squad that has since fired Scott Frost. Amazingly, if the Cornhuskers upset No. 17 Illinois on Saturday, the Iowa-Northwestern winner would also be one game out of first place in the division.

Wins and losses aside, this game is attracting attention in the sports wagering world the same way train wrecks do, mainly due to Iowa’s ineptitude on offense and its stout defense. When Circa Sports hung 31.5 as the over/under for the combined points, it sent many scurrying to the history books to determine the last time the number was so low. But folks, this was the lowest opening over/under ever known in NCAA football, according to records tracked by Action Network.

FanDuel was the only other major sportsbook willing to go under five touchdowns, posting an opening total of 33.5 points. DraftKings, Caesars Sportsbook, and bet365 all offered a flat 35 to start, while WynnBET, PointsBet, and BetMGM had a high-side hook on that touchdown total with 35.5 points. It has since climbed to 37.5 points at most books, who are trying to woo bettors with a low-side hook.

Caesars reported that 69% of its early betting tickets this week were on the under, but 65% of dollars were on the over. PointsBet noted a more lopsided split, with 87% of its tickets are on the under and 95% of the money on that side.

Ferentz family foibles for all to see

Kirk Ferentz complimented his players on how they handled the media on Saturday. Then… said during his line of questioning, he felt he was being interrogated at times on Saturday.

“It dawned on me coming home, as bad as today was, I could have been that guy… had his job…” pic.twitter.com/C0qzpDd0rY

After the Hawkeyes were thrashed 54-10 at No. 2 Ohio State last Saturday, the criticism of offensive coordinator Brian Ferentz — son of head coach Kirk Ferentz — on social media and by college football cognoscenti reached a fever pitch. It was the third time Iowa generated less than 175 yards of total offense, and the six turnovers matched its season total entering the game.

Amazingly, the score could have been more lopsided had Iowa’s defense not been resolute throughout the first quarter and held the Buckeyes to three field goals. That was after Iowa’s offense committed two turnovers and lost the ball on downs, each time inside its own 35.

The elder Ferentz defended his son this week when addressing the media, but the statistics provide plenty of fodder. Iowa ranks last among 131 FBS teams with 227.3 yards of total offense per game and is fourth worst in scoring at 14 points per game. The latter statistic partially obscures the fact the Hawkeyes defense and special teams have accounted for three of the team’s 10 touchdowns, and three of the seven offensive touchdowns came in a 27-0 rout of Nevada on Sept. 17.

The Hawkeyes have already flirted with low over/under totals, as their Sept. 24 game at Rutgers opened at 35 points and dipped as low as 33.5 prior to kickoff. Iowa’s defense wound up saving the day for over bettors in that contest, scoring two touchdowns in a 27-10 victory in which the over did not hit until Drew Stevens hit a 51-yard field goal for the Hawkeyes with 6:08 to play.

There is some Illinois-centric gallows humor in Northwestern being Iowa’s opponent, since the only people in that state likely to bet on this game must visit a sportsbook to put down a wager before kickoff — neither mobile nor in-game wagering is permitted on games involving in-state schools.

After being held to seven points in losses to both Wisconsin and then-No. 11 Penn State, the Wildcats did erupt for 24 points against Maryland last Saturday. The problem was the defense could not stop Roman Hemby, who gashed it for a tie-breaking 75-yard touchdown run with 3:22 left to consign Northwestern to a 31-24 defeat.

Brendan Sullivan will make his third straight start at quarterback after two middling performances. He has completed 29 of 41 passes for 257 yards with two touchdowns and two interceptions. Northwestern is not much better than Iowa at scoring, though, ranking 118th in FBS at 18.6 points per game. The Wildcats do rank 75th in net yards at 389.1 per contest, but that has been offset with 18 turnovers, contributing to a minus-8 turnover margin that is tied for 126th among FBS schools.

Can the under continue to trend in this series?

The under has delivered in the last five meetings between the schools, doing so with relative ease each time except in 2020. Northwestern posted a 21-20 victory that year after the over/under closed at 43, and under bettors had to sweat that outcome after Jesse Brown scored a go-ahead touchdown with 6:05 to play … in the third quarter.

The teams failed to crack 30 points in the other four contests, including a 17-12 win last year by Iowa with the over/under at 40.5 points. There was also a 17-10 overtime win for Northwestern in 2017 when the number was a comparatively stratospheric 46.5 points. The lowest closing total over the last five years was 35.5 points in 2019, when Iowa cruised to a 20-0 victory while holding Northwestern to 202 yards.

The under is 5-2 in Iowa’s games this season, including 3-1 when the number has been 39 points or less. This will be the lowest total for a Northwestern game, with the previous low being 44.5 against Wisconsin on Oct. 8. The under is 4-3 in Wildcats games, but the over has hit in their last two.