Legislation Awaits A House Vote, And Then Governor's Approval 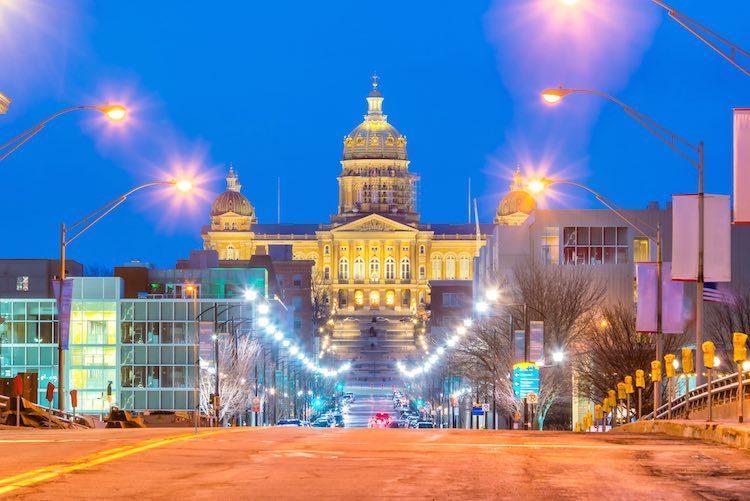 On Wednesday evening, the Iowa Senate passed a bill to legalize sports betting, both in-person at the state’s 19 casinos and over mobile devices. The vote had 31 senators in favor and 18 opposed.

The House still has to vote on its bill. Work has been done to make sure the bills are identical, but the Senate bill, SF617, underwent relatively insignificant amendments on Wednesday. House lawmakers will have to be on the same page with their version, HF748.

It’s unclear if the Iowa House will vote on the bill this session, which ends on May 3. It is believed that the bill has a more challenging path toward passage in the House, but the bill did have bipartisan support in the Senate.

The sponsor in the Senate, state Sen. Roby Smith (R), said Wednesday that the bill is primarily about consumer protection. Iowa will tax sports betting revenue at just 6.75%, a relatively low rate compared to other states. In fact, no state has a lower rate (Nevada also has a 6.75% state tax).

An additional 0.75% of sports betting revenue in Iowa could go to charitable causes.

Under the bill, monies would go into a newly created “Sport Fund.” The Iowa Racing and Gaming Commission would become the regulator. Smith said the commission “will be the best tool for a smooth roll-out.”

“Iowans deserve a product that is safe, secure, and enjoyable,” he during Wednesday’s hearing. “That is what SF617 does. I believe that what we are doing in this bill is the right thing to do.”

Under the bill, sports betting licensees would be allowed up to two “skins” or separate online brands apiece. New Jersey allows three, and Pennsylvania, soon to launch finally, just one.

While mobile betting would be allowed, the bill requires that sports bettors sign up for an online account in person at the 19 casinos until Jan. 1, 2021. It’s a pesky requirement, but given that the bill has mobile, does not mandate licensees purchase either “official league data” or a pay a “royalty” to the sports leagues, a delay for remote registration is a small wart.

Here’s the precise language from the Senate version: “‘Sports wagering’ does not include placing a wager on the performance or nonperformance of any individual athlete participating in a single game or match of a collegiate sporting event in which a collegiate team from this state is a participant.”

It’s unclear right now if that language will be a problem for the Iowa House. Lawmakers there have been interested in a more restrictive ban on all in-game bets involving Iowa college teams. In-game betting on college sports is a relatively niche, low-volume market right now, but in-game betting popularity is rising on football and basketball games in particular, so prohibiting that activity on college sports could give offshore platforms a leg up on that front.

Initially, some Iowa policymakers wanted to ban all college sports bets, so there’s been quite a bit of discussion to move the ball down the field on the issue.

Iowa has been home to a relatively robust conversation about problem gambling, and it’s common knowledge that younger gamblers are more susceptible. That has prompted some lawmakers to focus in on the collegiate betting aspect of the legislation.