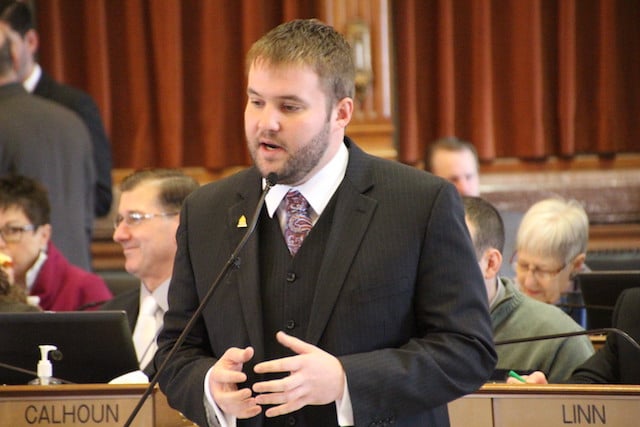 A day before former NFL running back Napoleon Harris III of Illinois introduced a pro-league friendly Illinois sports betting bill, the Iowa House Government Committee on Thursday voted to pass a bill legalizing Iowa sports betting — and it does not bow to the demands of the NBA and Major League Baseball. The pro leagues have recently been lobbying around the country for states to legalize sports betting with a 1% “integrity fee” that is, put simply, a payout. But the committee voted in favor of the Iowa sports betting bill that will move to Iowa’s Ways and Means Committee.

According to Rep. Jake Highfill (R-District 39), the Government Committee-sponsored HSB 592 passed the bill 16-7 (latest version here: HSB 592.3383), which must move to Ways and Means because it involves a tax: the bill calls for a rate of 5% on the first one million dollars of adjusted gross receipts and then 10% on the next two million dollars. Should the Ways and Means Committee pass the bill, it will then move to the full House floor. The Iowa legislature has about two months to consider the bill before adjourning April 17.

As with sports wagering legislation around the country, Iowa sports betting is contingent upon the decision in the Supreme Court case, Murphy v. NCAA (formerly Christie v. NCAA), in which the Professional and Amateur Sports Protection Act (PASPA), a 1992 law essentially banning sports betting outside of Nevada, could be overturned. A decision is expected in April or May, but possibly as soon as March 5.

Rep. Highfill told SportsHandle that the bill, initially introduced by Rep. Ken Rizer (R-District 68), creates a tax structure only a bit higher than the 6.75% tax currently imposed on sportsbooks in Nevada. It is significantly lower than the 12.5% tax being considered in Illinois and a couple notches lower than the 10% tax proposed in West Virginia. The bill would also charge to-be operators a $25,000 licensing fee.

But what is most notable about the Iowa bill, which would allow wagering on collegiate and professional games, is that it does not include the integrity fee, which is a tax on the total amount wagered, not a sportsbook’s revenue. In reality, the pro leagues are asking for a 20% cut of a typical sportsbook’s revenue. According to Highfill, Iowa lawmakers were privy to the talking points and memos that NBA and MLB lobbyists have been circulating around the country, but did not feel the integrity fee was appropriate for their state.

NBA Commissioner Adam Silver Weighs in on the ‘Integrity Fee’

The so-called integrity fee has garnered much attention in recent weeks and on Saturday, at a press conference during the NBA’s All-Star weekend in Los Angeles, NBA chief Adam Silver didn’t do much to make it look like anything more than a money grab. Both the NBA and MLB have referred to the fee as a way to monitor and maintain the integrity of games should sports betting be legalized, but Silver on Saturday essentially said it doesn’t matter what the fee is called because in the end, the leagues are “creating this content” and deserve to be compensated.

“Call it integrity fee, call it a royalty to the league,” Silver said. “This notion that as the intellectual property creators that we should receive a 1% fee seems very fair to me.”

Silver went on to say that the league spends $7.5 billion annually to put a product on the floor and that it would incur additional expenses to “monitor that data, our ability to flag problem issues, trends around the league, enforcement, additional training.” He did not address, however, how much benefit the NBA already derives from sports betting in terms of heightened interest, engagement and increased TV ratings.

Multiple casino companies, including Caesar’s Entertainment, Elite Casino Resorts and Pinnacle Entertainment/Ameristar Casino, all have lobbyists registered in favor of the bill.  All three companies are already doing business in Iowa. The state currently has 23 casinos, including those on Indian lands as well as riverboat facilities.

Iowa also has two horse-racing tracks and one greyhound-racing tracks. Off-track betting is done at casinos throughout the state.

The Iowa Gaming Commission supports the idea of legal Iowa sports betting and president and CEO Wes Ehrecke has publicly spoken in favor of legalizing sports gambling. The commission has lobbyists registered “for” HSB 592.

“I think a lot of people enjoy sports, watching sports, and the opportunity to bet on it,” Ehrecke said earlier this month. “Especially in a legalized environment, and set the standards by our Racing and Gaming Commission and high levels of integrity, assure that you’re going to be paid and to have it here, I believe will be a positive.”