Iowa Sports Betting Likely To Come Down To Wire In 2019 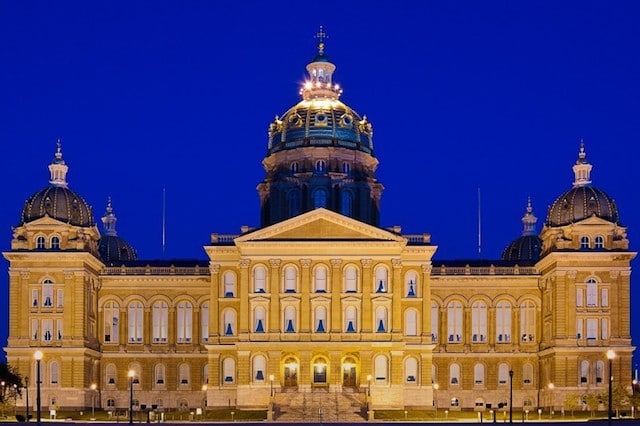 Many signs have pointed to Iowa as one of the strongest contenders to legalize sports betting in 2019, but a compromise over the provisions of the bill has yet to be hashed out.

According to a report from The Daily Iowan, some policymakers are currently at odds over whether or not to make it illegal to take bets on college sports. Some Iowa Democrats reportedly want the bill to prohibit those bets, as well as in-play wagers on an individual athlete’s performance in collegiate and professional sports. Ironically, the pro sports leagues welcome in-play wagering with open arms. “Those are all potential, additional forms of engagement for viewers,” NBA Commissioner Silver said in April 2018.

While the sponsor of the legislation, and presumably other backers, are arguing that the 35-year-old Iowa Racing and Gaming Commission should have the discretion over which wagers to allow.  It comes down to how successful an Iowa sports betting white market could become.

In its current form, the legislation is publicly supported by the Iowa Gaming Association, which represents the state’s 19 commercial casinos, as well as the likes of DraftKings and FanDuel. It has wide stakeholder support.

Legislation is expected to make it to the House and/or Senate floor for full consideration, but proposed amendments reportedly make its fate uncertain. Banning bets on college sports could make the bill unattractive to stakeholders, considering the popularity of college football and March Madness.

“Black-market betting is going on at a very large scale right now, and I think if you prohibit any particular bet from being considered, those people are just going to stay doing it in the black market,” state Rep. Bobby Kaufmann, a Republican sponsor of the proposal, told The Daily Iowan.

The Board of Regents is neutral to the sports betting efforts.

Without opposition from the institutions behind the college sporting events, why do some in Iowa want those bets excluded from the state’s legal and regulated options?

A recent poll may shed some light on the answer.

According to a highly respected pollster out of Des Moines, public sentiment for sports betting in Iowa may be weaker than it is elsewhere in the country. The Des Moines Register/Mediacom Iowa Poll found that a mere 25% of Iowans “favor” the legalization of betting on college sports. The poll found that 68% oppose. The support increased significantly for betting on professional sports, with 40% in favor and 52% opposed. The remainder in both cases was unsure.

Equipped with poll findings like those, it’s not surprising that policymakers lukewarm to gambling are interested in amending the legislation. With that said, it would be a short-sighted decision.

Iowa is considering a tax rate of 6.75%, a favorable one for the industry. In addition to mobile betting, the legislation would eventually allow remote account registration. Under those conditions, Iowa could see more than $4 billion in annual sports betting handle, according to a 2017 study by Oxford Economics.

That handle could generate $250 mm in taxable sports wagering revenue.

However, without betting on college sports, those figures would be drastically reduced. In Nevada, March sports betting handle set an all-time high of $522 mm in 2018, 10.4% of the state’s handle for the calendar year. March is one of the most popular betting months in the Silver State’s mature sports betting market.

There have also been anecdotes out of Nevada that the volume of college football wagering is closing the gap between on what the NFL produces.

With a slew of offshore sites offering a full menu of betting options to Iowans, gamblers in the state would still be able to bet on college sports, but the state wouldn’t see any of the benefits. Bettors would also be inclined to give the black market some of their pro sports betting action as well.

Additionally, Iowa bettors may in the future decide to travel across state lines to possible sports betting locations in Minnesota, Illinois and Missouri, all of which are considering bills this year.

Iowa begin the year with 10 study bills on file to get the ball rolling on sports betting. Right now, there are two pieces of legislation alive and well ahead for a stretch run in Des Moines.

The state only has about a month and half left to craft a final version of a sports betting bill. The session expires on May 3. The good news is that legislation can carry over into 2020, but Iowa might night need it. The state has done extensive work on the issue, dating back to before the U.S. Supreme Court ruling last May.

In addition to Kaufmann’s HF 648, there’s a companion bill in the Senate, SF 366, sponsored by state Sen. Roby Smith, a Republican. So far, supports betting has been a relatively partisan issue.

Both efforts cleared their respective committee hurdles by the Mar. 8 deadline, putting them on track for reaching the floors in their respective chambers. It’s unclear which bill could ultimately be the vehicle.