No Result
View All Result
Home Iowa Sports Betting – Where To Play, Mobile Sportsbooks, And FAQ

Iowa Sports Betting – Where To Play, Mobile Sportsbooks, And FAQ 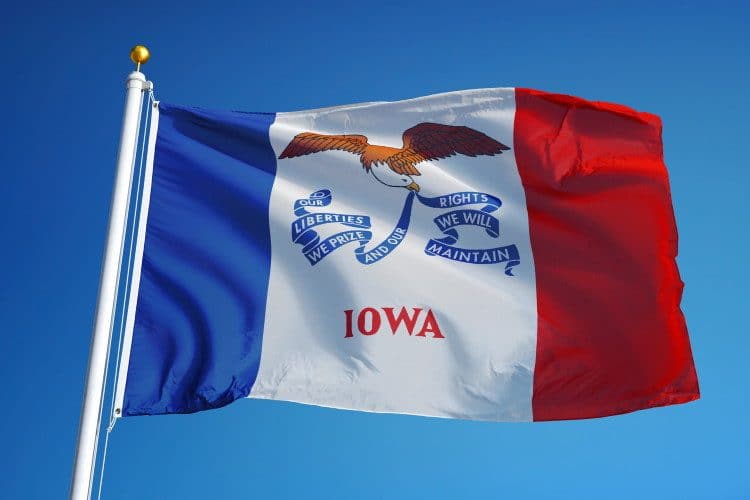 On August 15 of 2019, Iowa became the 11th state in the nation, and the first in the upper Midwest, to allow legal sports betting.

From Altoona to Waterloo, bettors stepped up to lay money on collegiate and professional sporting events.

You can almost hear the whisper from the cornfield in Dyersville – if you build a sports-wagering operation, the bettors will come. And come they’ll have to, as Iowa is forcing players to register their mobile sports betting accounts at a land-based casino — at least until January 2021, when this frustrating restriction lifts.

When betting launched in Iowa,19 commercial casinos had been issued sports-wagering licenses. Casino Queen Marquette was the only venue not to apply – yet.

At least 15 of those casinos will eventually have mobile betting as well, according to gaming administrator Brian Ohorilko. Several already do. With two skins allowed per license, it means there exists the possibility of 38 individual wagering apps in the betting marketplace.

Sportsbooks at Iowa casinos include: 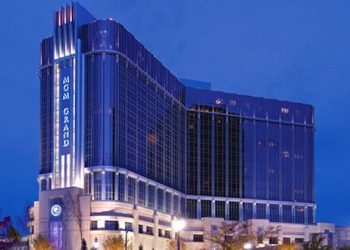 Garden State handle tops $500 million in November and iGaming has had a major economic impact on the state. 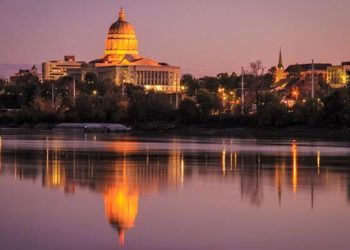 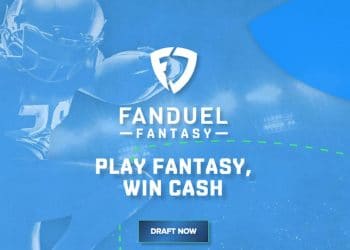 FanDuel can now hold DFS contests in Iowa after passing the state's standards for controls.

Most notable about Iowa’s betting operations is how quick the turnaround was from a bi-partisan legislative passage in April 2019 to Gov. Kim Reynolds’ signature a couple of weeks later, to bettors in mid-August being able to wager on the season kick-off between the Iowa Hawkeyes and Miami (Ohio) Redhawks.

It took three-and-a-half months. Were there any bets available on that?

Other states, such as Illinois and Tennessee, which passed betting legislation around the same time as Iowa will be lucky if betting is up and running in time for the Rose Bowl on Jan. 1, 2020.

Of the more than 20 casinos in the state, more than a half-dozen began taking sports bets at noon on August 15 or 2019, with more going live over the ensuing weeks.

Another improbable feat achieved only by Iowa, several mobile apps took bets on the same day that on-site betting began. At least seven are licensed so far. Most other states have launched solely with brick-and-mortar betting with mobile launching later due to added technology and needed internal checks and testing.

Iowa Racing and Gaming Commission (IRGC) administrator Brian Ohorilko attributes the state’s ability to hit the gridiron running to the fact the overseeing panel began preparing for the possibility of legal sports betting after the U.S. Supreme court overturned the Professional and Amateur Sports Protection Act of 1992.

Another step the IRGC took to speed things along was to establish relationships with states that already have sports betting and get copies of their rules and regulations on wagering. No issues getting a little help from your friends.

In July 2019, Iowa’s rules, which govern how sports betting is to be conducted in the state including operator applications and licensure and establishing problem gambling policy, were OK’d by the IRGC following a public hearing.

The American Gaming Association, which promotes the interests of the casino industry, expressed reasoned praise for the Iowa sports betting law:

“The state of Iowa has set its legal sports betting market up for success with a reasonable tax rate, mobile wagering, strong consumer protections and provisions that put responsible gaming at the forefront. Through the leadership of champions like Iowa Gaming Association President and CEO Wes Ehrecke, Iowans will now have a safe alternative to the illegal market that has thrived in the Hawkeye State and across the country…”

Here are a few things to know:

Is there legal mobile sports betting in Iowa?

Yes, but in order to place real-money wagers from your mobile device, you must first register an account at a retail casino.

In Iowa, each licensed casino is permitted two individually branded sports betting apps/websites, or “skins.” To register for a skin, players can’t just go to any old casino. No, they must go to the casino that is affiliated with that skin. For instance, if Diamond Jo is partnered with FanDuel, and has a FanDuel-branded site, as well as a self-branded one, those are the only two apps you can register for at the Diamond Jo retail sportsbook.

This is highly inconvenient, as Iowa is by no means a small state. So instead of registering for as many apps as they like from the comfort of their own home, patrons will have to drive over to the casino to sign up for a maximum of two apps at a time, out of a possible 30 or more.

Luckily, this frustrating restriction will only be in place until January 1, 2021, at which time, players will be able to register from anywhere in the U.S. We expect the online arm of Iowa’s sports betting industry to grow significantly at this time.

Note: Some casinos require that you are also in possession of a loyalty card when registering a mobile sports betting app. For instance, Grand Falls Casino forces this, but you can get the process started through its Elite Sportsbook wagering site.

Who can place sports wagers in Iowa?

The legal gambling age in Iowa in 21, so players wishing to place sports bets will need to be at least that age as well. In addition, they’ll need to be able to verify their age (and identity) via a valid ID when registering their account at the casino.

Regulations also state that players who win in excess of $1,200 provide their social security number.

Bettors on Iowa’s self-exclusion lists will not be permitted to enter state casinos, and therefore will be unable to place bets at retail outlets or register for mobile sports betting apps.

Do I need to be in Iowa to place real-money wagers?

Yes. Bettors will need to enable location services so that they may be geo-targetted in Iowa before placing a real-money wager.

However, all other account management features, such as cashiering, can be handled from out-of-state. Once the in-person registration caveat is lifted in 2021, players will also be able to register their accounts from anywhere.

Bettors do not need to be residents of Iowa to place a wager, in so long as they have both feet planted within its borders.

How is money deposited online?

For future deposits, bettors will likely be provided an array of options. Already we see casinos rolling out their own prepaid card (Play+) which can be funded with a checking account or PayPal. Other options that we might see in the future include:

What type of bets and betting markets are available?

Iowa does not permit in-play or prop betting on Iowa collegiate games. Otherwise, the market will prove pretty wide open, with an array of professional and college markets at a bettor’s disposal. Sports include:

In terms of game formats, we already see Iowa books offering most of the old standbys including totals, spreads, moneylines, parlays, futures, props, and in-game.

Are there any sign-up bonuses for Iowa sports betting sites?

Since most welcome bonuses are focused on first-time depositors, it would be in a player’s best interest to ask the teller if there are any bonuses available at the time of sign up. Do not miss out on these offers, which could range from a deposit match, to a matched free bet, or risk-free bet.

When Iowa lifts the in-person restriction, we expect a ton of operators to roll out lucrative sign-up offers to new players. So it may be best to wait until January 2021 to register online accounts.

Does Iowa offer any other kinds of online gaming?

Not at present. The legislation legalizing sports betting did not legalize any form of online gambling, such as online casino games or online poker. There is no timeline or indication that these verticals will be legalized. However, we do expect Iowa to revisit online gambling expansion if their online sports betting industry performs well.

Iowa is considering legalizing an online lottery, which could roll out as early as 2020.

What are the taxes and licensing fees on sports betting?

Legislators set up Iowa’s sports betting industry for success, with a tax rate and licensing fees that are both very reasonable.

The tax rate is just 6.75% on sports betting revenue, which is significantly lower than even New Jersey, which has a thriving industry.

The licensing fee is just $45,000, which was low enough to encourage just about every casino in the state to give sports betting a try.

How did we arrive at legal sports betting in Iowa?

Republican Rep. Jake Highfill proposed legislation in 2018 in anticipation of the U.S. Supreme Court hearing New Jersey’s lawsuit challenge to PASPA. Highfill’s measure, which allowed for sports wagering in Iowa’s commercial casinos, missed the fast track, however, when the high court ruled gambling could expand nationwide but the Iowa Legislature adjourned before adopting the betting measure.

In early 2019, Sen. Roby Smith and Rep. Bobby Kaufmann each proposed sports wagering measures, HF 648 and SF 617 respectfully. During the bills’ advancement in both chambers, there were tussles regarding who would oversee the betting operation, where data would originate, and in-game betting. A final amendment delaying fantasy sports implementation to 2020 was added.

Once differences were smoothed out, with legislators meeting in the middle many times, a final version of SF 617 passed in the Senate, was approved 67-31 in the House and given to Gov. Reynolds for her signature, which occurred May 13.

The initial target date for sports betting to begin was July 4 “to emphasize that it’s a freedom we’re giving people,” according to Sen. Smith. That date was pushed back to accommodate rulemaking and the implementation process.