The Travis Hunter shocker sheds neon light on the NCAA's NIL bonanza. Should bettors be wary?

by Mike Seely
in Legal, Regulation 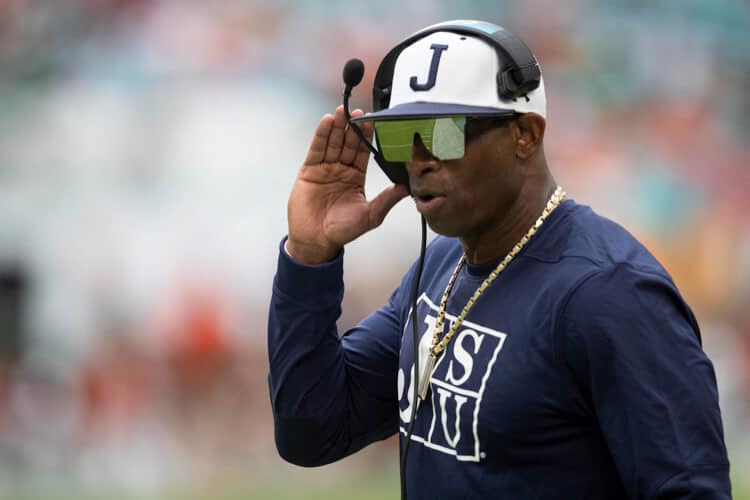 Jackson State’s program is small beer even by FCS standards. As The Ringer pointed out, in 2019 Jackson State made $6 million from its athletics, well below the FCS median of $16 million — and a fraction of the $45.5 million annual payout that SEC schools get.

In a tweet, Hunter explained that his decision to abandon Tallahassee for Jackson was “a dream that is hard to let go of,” adding, “Jerry Rice, Doug Williams, and of course the legend, JSU’s own Walter Payton — Historically Black Colleges and Universities have a rich history in football. I want to be part of that history, and more, I want to be part of that future. I am making this decision so that I can light the way for others to follow, make it a little easier for the next player to recognize that HBCUs may be everything you want and more: an exciting college experience, a vital community, and a life-changing place to play football.”

He went on to say he looked “forward to working with the iconic Deion Sanders” — and why wouldn’t he? “Coach Prime,” as Hunter referred to him, is only one of the best corners to have ever played the game, and Hunter’s a cornerback. But for some observers, this explanation wasn’t good enough, as an unsubstantiated rumor that Hunter had been promised a lucrative Name, Image, and Likeness (NIL) deal with Barstool Sports — where Sanders hosts a podcast — began circulating on social media.

If this rumor were true, it would be a clear violation of the NCAA’s otherwise flimsy regulations governing NIL arrangements.

“Obviously, the way it seems is that if you flip a kid from Florida State to Jackson State with an NIL deal, it would seem like an inducement,” Vic DeNardi, a former NCAA enforcement officer who’s now head of NIL education for Draft.ly, told Sports Handle. “[But] unless it’s, ‘You go to Jackson State, you get this deal,’ it’s not a clear-cut recruiting inducement.”

It wasn’t long after the Barstool rumor started making the rounds that a Jackson State official told The Clarion-Ledger it was “unequivocally not true.” For his part, Barstool President Dave Portnoy issued a cryptic tweet and declined to comment when asked about the alleged arrangement by the New York Post.

Either way, the whole situation serves as a high-profile reminder of how severely the “NIL arms race,” as Drake Group President Donna Lopiano recently put it, is altering college sports — with virtually no oversight.

“The NCAA is running away from its role as a national governing organization” with its stance, or lack thereof, on NIL deals, Lopiano told Sports Handle on Thursday. “They’re not applying their outside employment standard to NIL. The NCAA is getting out of national governance because it is gunshy from antitrust.”

Matt Brown, who edits the newsletter Extra Points, which covers off-the-field forces in college athletics, said the NCAA would be “completely f**ked” if they tried to institute NIL rules “because of their own inability to do something [about it] 20 years ago.”

“The reason you see [NCAA President Mark] Emmert and conference commissioners begging for Congress to get involved is that’s really the only entity that can set these rules,” added Brown, noting that state governments that have adopted NIL legislation haven’t provided enough clarity on how their rules would be enforced. “But that raises other big questions. Do you want to trust college sports regulation to Ted Cruz or Elizabeth Warren? I’ve watched a lot of these hearings and have not come away impressed with either party’s grasp on how this marketplace works.”

There are no limits on how much money athletes can be paid in NIL deals because, as Brown put it, “it’s almost impossible for the NCAA to institute limits. They’d be struck down in antitrust law. We don’t have salary caps on coaches, and the federal court system is increasingly hostile to the amateurism argument made by the NCAA.”

To this end, Alabama’s Nick Saban raised eyebrows over the summer when he revealed that his first-string quarterback, eventual Heisman winner Bryce Young, had earned nearly $1 million from NIL deals before so much as making his first start for the Crimson Tide.

“Certain positions, probably, enhance opportunities to create value, like quarterback, and our quarterback already has approached ungodly numbers,” Saban said, leaving his SEC rival, Lane Kiffin of Ole Miss, dumbfounded. “It’s almost seven figures. And it’s, like, the guy hasn’t even played yet. But that’s because of our brand.”

Another big signing on Wednesday involved Texas’ successful courtship of highly touted quarterback Quinn Ewers, who skipped his senior year of high school to enroll at Ohio State. After spending the season on the bench behind standout Buckeyes quarterback C.J. Stroud, Ewers entered the transfer portal and wound up signing with the Longhorns.

Ewers’ decision came a week after Geoff Ketchum of Orangebloods.com tweeted, “Word on the street is that first round draft pick-level NIL money is on the table for Quinn Ewers if he chooses Texas as his transfer destination. The weaponization on the NIL front is fully underway.”

As BroBible wrote in response to Ketchum’s tweet, “Could that mean that Texas is offering Ewers closer to $15 million? Probably (hopefully) not. Does it mean that Ewers is being offered more than $1 million in NIL? It certainly seems likely.”

“I don’t think people really say it this way, but let’s not make a mistake: We have free agency in college football,” Kiffin said during a press conference this week. “And the kids go to where they’re going to pay the most. No one else is saying that, maybe, but if the kid says, ‘This is what I’m getting here for NIL,’ it is what it is. Free agency has been created in college football … except you can’t lock people into a contract. They can go at any time. It’s a new world that we’re in. Sometimes they want to come to you and say, ‘I get this much money if I go there.’ This is just a whole new thing to deal with.”

Under most state NIL laws — and there were 21 states that had instituted them as of Oct. 1 — schools aren’t permitted to directly facilitate NIL deals for student-athletes. Instead, they’re relying on well-heeled alumni to set up NIL-specific booster organizations to do this bidding. If you’re fond of the color gray, then this is an area you’ll very much appreciate.

PonyUp and the Pancake Factory

On Monday, Southern Methodist University, home of the infamous “Pony Express” program of the 1980s, announced the formation of an NIL program called PonyUp that’s only available to football players. Led by noteworthy alumni like Eric Dickerson, PonyUp will benefit from an annual commitment of over $1 million that, according to a press release, “is intended to immediately make SMU the leader nationally in NILs and is expected to expand quickly.”

One component of PonyUp is a professional development program called “NIL Learnships.” According to the release, this will entail “an innovative twist on the paid internship, whereas players are connected to successful entrepreneurs and develop a 1 to 1 mutual mentorship, with both parties exchanging ideas and different perspectives, and the athlete getting enhanced mentoring in areas such as financial management and other business skills. The NIL experience will be shared via social post, appearances, and other experiences.”

Of SMU’s program, Brown said, “I think it’s a good thing. If you are a football player at SMU, when do you have time to get competitive internships or study abroad? You’ve got 20 hours of practice or film or meetings, so you’re limited in your academic opportunities. I think you could look at something like this as literally providing athletes with the opportunities they were promised. It’s a little bit different now than when they were just dropping bags [of money].”

“We’ve gone from under the table to over the table,” added Lopiano. “The over-the-table test is quid pro quo — is there a legitimate service attached? And one of the dilemmas with that is the NCAA has just exited the world of regulation.”

If SMU’s Mustangs are to become “the leader nationally in NILs,” they’ll have to catch a herd of wealthy Longhorns. To wit, Texas recently established its own version of PonyUp called the Clark Collective, which, according to a press release, “has secured an initial pledged commitment of $10 million for University of Texas Name, Image, and Likeness (NIL) activities with the ultimate goal of having the largest dedicated fund in the country for college athletes.”

And that’s just one of the NIL programs affiliated with Texas football. Another, Horns With Heart, is a nonprofit that has pledged to provide every Longhorn offensive lineman on scholarship with $50,000 a year in NIL funds to promote and participate in charitable endeavors.

Horns With Heart’s O-Line initiative has been dubbed The Pancake Factory, “in large part due to blocks set by offensive linemen when trying to open running lanes,” reported Sports Illustrated, which added, “The Pancake Factory is set to begin August 1, 2022, with a total of $800,000 annually earmarked for the offensive line sponsorship. This, along with the Clark Field Collective, another company sponsoring Texas players, means each Texas OL will be making at least $150,000 per season.”

“Here you see everybody gaming the system, even for good causes,” observed Lopiano. “What is key is nobody’s doing this for non-athletes. They’re doing it because they’re athletes. If a booster club exists for one purpose only, which is to win the recruiting wars for one institution and only doing NILs for one set of kids, what is that? A recruiting inducement.”

But DeNardi, who was once tasked with enforcing such matters for the NCAA (albeit during the pre-NIL era), isn’t so sure.

“The pay for play is pretty narrow in that the deal just can’t be, ‘You’re getting $50K to be on the Texas football team,’” he said. “If you’re giving value for your services, like promoting a charity, that’s the hook. It’s a fine line. If you weren’t a Texas offensive lineman, you wouldn’t be getting this deal. But the fact that you have to do something in return differentiates it.”

One of the most consistent critiques of the NIL bonanza is that it will widen the competitive gulf between lavishly funded programs like Texas and those, like Jackson State, that operate on a relative shoestring. But Jackson State just landed the No. 2 recruit in the country, and Texas hasn’t fielded an elite team since Vince Young was behind center.

“I know that for fans or potential bettors, there’s a concern that this is going to lead to competitive balance issues,” said Brown. “But look at Texas over the past decade. Was talent acquisition the problem? Was it the problem at USC? Even if this world provides an advantage to bigger brands, you still have to coach them.”

Brown closed by saying that if “sh**ty coaches” continue to walk the sidelines, “all [these NIL programs] will be doing is wasting rich people’s money.” 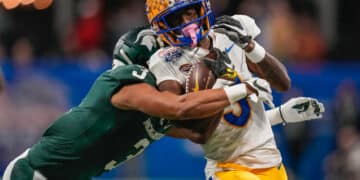