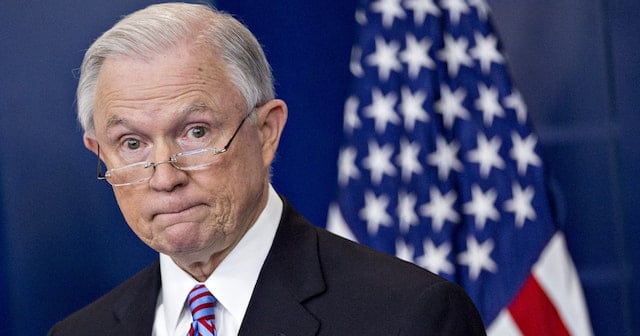 On Thursday Attorney General Jeff Sessions made one of his “stupidest decisions” as head of the United States Justice Department (DOJ), by reversing rules set forth under President Barack Obama that created a federal policy of noninterference with states that have legalized marijuana for recreational or medicinal use.

That 2013 policy (the “Cole memo“) discouraging federal prosecutors from levying charges on marijuana related crimes in states that have legalized sale of marijuana? Gone. That memo advised prosecutors to de-prioritize enforcement of federal law on marijuana, which remains classified as a Schedule I controlled substance — same as heroin.

“Today’s memo on federal marijuana enforcement simply directs all U.S. attorneys to use previously established prosecutorial principles that provide them all the necessary tools to disrupt criminal organizations, tackle the growing drug crisis, and thwart violent crime across our country,” Sessions said.

This move has implications for federalism and sports betting. In fact marijuana policy has come up throughout the Supreme Court Sports Betting Case (Christie v NCAA) in that context and even during oral argument (see Sotomayor and Olson on p. 70.) 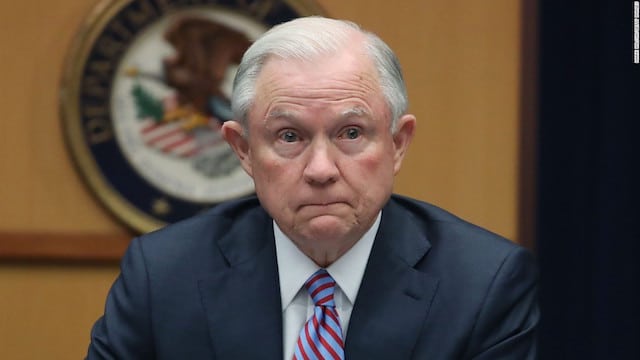 Let’s go back to the “stupidest decision” remark and set the table for the states’ rights versus federal law issue. Here’s what Representative Earl Blumenauer (OR-03) of Oregon, one of seven states to legalize marijuana in their borders, said in a Thursday statement about the reversal:

“This is outrageous” said the co-chair of the Congressional Cannabis Caucus. “Going against the majority of Americans—including a majority of Republican voters—who want the federal government to stay out of the way is perhaps one of the stupidest decisions the Attorney General has made. One wonders if Trump was consulted—it is Jeff Sessions after all—because this would violate his campaign promise not to interfere with state marijuana laws.

“It’s time for anyone who cares about this issue to mobilize and push back strongly against this decision.”

A majority of Americans now favor legalization of marijuana, same as the case for sports betting. Likewise, in a July poll by Quinnipiac, 75% of Americans and 59% of Republicans said that they oppose the enforcement of federal marijuana laws in states that have legalized it.

This is the start of Jeff Sessions’ own war on drugs, a battle against states’ rights, which is sure to face deep opposition from states and citizens. (We’re almost at sports betting.) Sessions’ suggestion that going after marijuana to battle the drug crisis is also completely misguided: opioid abuse is plummeting in states with legal marijuana. Meanwhile opioid deaths are skyrocketing nationally with figures showing that over 64,000 Americans died from opioid overdoses in 2016, up 22% from the 54,400 in 2015.

This is what Jeff Sessions thinks about marijuana (video below), which will tell you what he thinks about federal law enforcement and government’s role in regulating anything that’s been viewed as impure or immoral, such as gambling. Indeed you are likelier to see a unicorn (excluding Kristaps Porzingis) than bump into Jeff Sessions at a blackjack table. And this move today signals where else he might be taking the DOJ.

Over 20 states joined to back New Jersey urging PASPA’s (Professional Sports and Amateur Sports Protection Act) repeal on constitutional grounds in Christie v NCAA, including Utah which doesn’t even have a state lottery. This particular paragraph comes from a smaller group of states’ brief asking the Supreme Court to take the case (a “cert” petition):

The Third Circuit’s reasoning throws into confusion the extent to which any state electorate may control its lawmakers’ exercise of the police powers that have, since the earliest days of the Republic, enjoyed freedom from federal interference. The slope is slippery: if allowed to stand, the Third Circuit’s opinion could place at the mercy of the federal government state attempts to experiment with their respective—and often uniquely local— approaches to, inter alia, the days on which alcohol might be sold, hunting and fishing licenses, lotteries, and speed limits.

States and their citizens’ (generally) wants to have states and not the federal government implement local approaches and solutions that meet the needs and desires of those states. In other words: Keep the federal government out of it. This is a tenet of federalism that is under fire with PASPA and legal marijuana. Clearly Jeff Sessions is prioritizing his disdain for legal marijuana over states’ rights.

If the Supreme Court upholds PASPA (a decision is expected in April or May), which prohibits states from legalizing sports betting (exempting Nevada), or limits its decision to a validation of New Jersey’s 2014 law that would open the door to sports betting, Sessions might use PASPA for a sports betting crackdown. Subsection three of PASPA reads:

Typically the leagues have acted to block sports betting legalization under that clause, as they did in Delaware in 2009 and in New Jersey in 2012. Under Sessions’ direction, if PASPA is upheld but New Jersey get sports betting through the successful repeal of its sports betting prohibitions, there might still be some gray area where the DOJ could go after New Jersey.

Or if PASPA is upheld or punted back to Congress, the DOJ might go after other states (with or without the involvement of sports leagues, which are softening on sports betting) that decide to challenge PASPA and legalize sports betting and dare the DOJ to act. The leagues have always initiated litigation against such moves, never the DOJ, although they later intervened in the Christie case.

The Wire Act and UIGEA

More likely are legal battles between the DOJ and states in connection with the Federal Wire Act of 1961 and the Unlawful Internet Gambling Enforcement Act of 2006 (UIGEA), which led to poker’s Black Friday in 2011 but created a loophole for daily fantasy sports, because of the law’s language that exempts certain fantasy games of skill. DFS operators have successfully weaved through this loophole. Could Sessions interpret UIGEA and fantasy sports games of skill differently?

DraftKings just creeped even closer to the edge of UIGEA with its new contests based on single games. UIGEA prohibits games based on on single-team performances. That could be dicey for the operators and their payment processors.

If PASPA is struck, there is uncertainty over how the Wire Act might interact with states’ legalization of sports betting, how casinos/sportsbooks may operate together across state lines, which might be resolved by the law’s “safe harbor” provision allowing transmission of information regarding sports wagering between states where betting is legal.

But there could be liquidity issues at new, legal sportsbooks: could Las Vegas-based casinos legally pool financial resources with new sportsbooks? 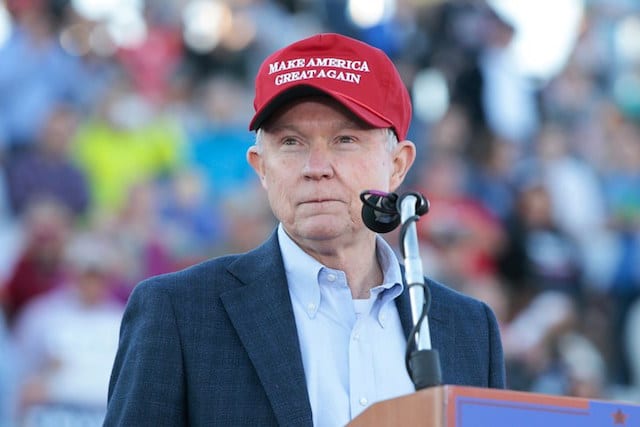 Regarding gaming at large, some lawmakers are urging Sessions to take a good aggressive look at the Obama-era DOJ’s Wire Act interpretation in 2011, an opinion that limited the Wire Act’s application to sports betting, not online gambling related to sporting events.

“I would revisit it or make a decision about it based on careful study,” Sessions said during his confirmation hearing. That’s potentially trouble for states like New Jersey, Illinois and Pennsylvania which have legalized online gambling.

Reaction From the White House on State-Legalized Marijuana? 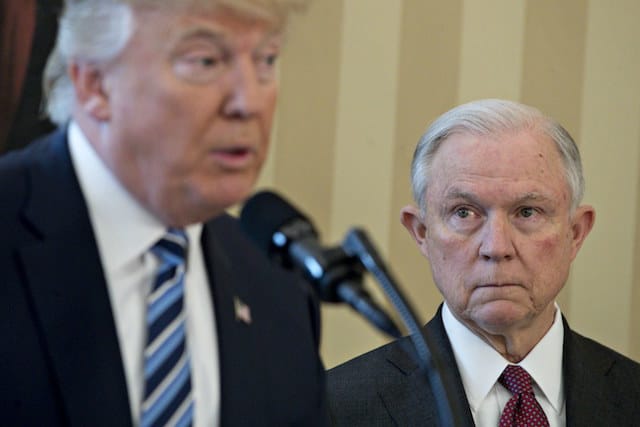 Republican Members of Congress do not need another headache, especially from an anti-business, politically toxic issue tied to them through the Trump administration and Sessions, a former Republican senator from Alabama. They’re already facing what may be a brutal 2018 midterm election season.

Outside of Congress, Sessions may also get pushback from the White House, despite Donald Trump’s mission to reverse anything associated with Obama. After all, this directly contravenes what candidate Trump said in July 2016 — that he wouldn’t go here:

Had to ask @realDonaldTrump about #marijuana in light of his alliance with @GovChristie:#9NEWS #COpolitics pic.twitter.com/lK4btIQWuK 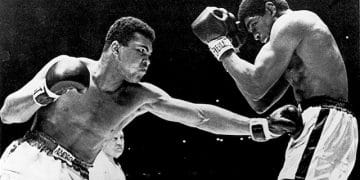 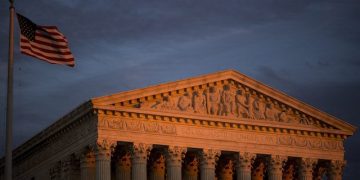