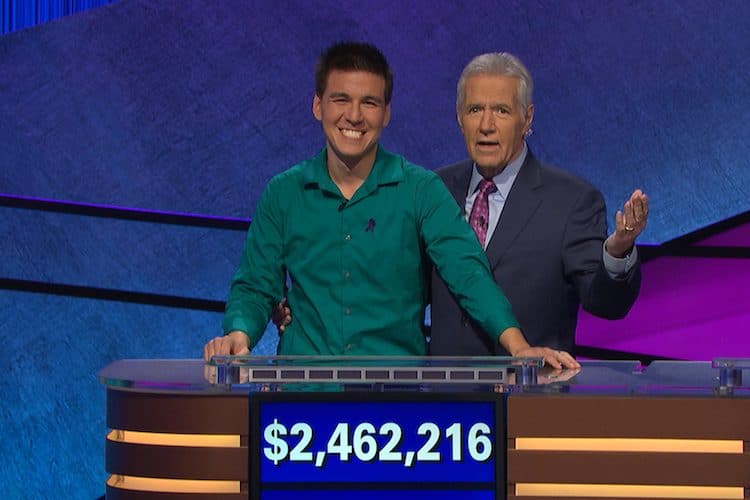 James Holzhauer may be using his some of his Jeopardy! winnings on a massive wager for the opening weekend of football season, after all.

Holzhauer’s 32-game winning streak officially came to an end on an episode that aired Monday when the professional sports bettor finished second to Emma Boettcher, a user experience librarian from Chicago. Boettcher won the game with $46,801, finishing ahead of Holzhauer by more than $20,000.

“Emma dominated her warmup games that day, and I knew she would make an extremely tough challenger,” Holzhauer said. “I was still incredibly impressed by her courage on that ‘True Daily Double.’ I’m proud that it took a top-level player at her absolute best to eliminate me.”

Speaking exclusively to Sports Handle last week, Holzhauer said he didn’t expect to receive his winnings until 120 days after his final episode aired. But Jeopardy delivered a winner’s check to Holzhauer over the weekend, a Jeopardy! spokesperson said, ahead of Monday’s episode. Holzhauer also posed for photos with members of the Jeopardy! staff on Sunday in Las Vegas.

Many top contestants must wait several months after the airing of their final regular season appearance before collecting their winnings. As a condition of her non-disclosure agreement with Jeopardy!, former contestant Kathryn Kienholz went months before receiving a $22,000 payout from her December 2018 appearance, Newsweek reported.

“He’s such a legend in this show that just being on the podium with him even if it’s not the gold medal is really an honor,” Holzhauer said of Jennings.

Prior to the seminar, Sports Handle sat down with Holzhauer for several minutes to discuss how he’s adjusting to his newfound celebrity status. Holzhauer listened intently as an elderly couple warned him on the trappings of fame while alluding to Charles Van Doren’s role in the 1950s scandal on NBC’s game show Twenty-One. Although Holzhauer often draws a crowd now when he goes grocery shopping, he does not mind the encounters since the other shoppers have mostly been polite.

During Holzhauer’s 32-game win streak, he answered correctly on 1,160 of 1,196 attempts, according to website TheJeopardyFan.com, producing an astounding success rate of 96.9 percent. Some of the clues could stump even the most accomplished trivia savant. Do you know the anesthetic Queen Victoria ingested in 1853 when she experienced little pain during the birth of her eighth child? Neither did Holzhauer who answered nitrous oxide, not chloroform.

One of the more memorable exchanges between Holzhauer and Alex Trebek occurred on an episode that aired May 29. When asked by the Jeopardy host to reveal the most he ever lost on a sports wager, Holzhauer admitted that he once found himself on the losing end of a bet where he risked roughly $20,000.

Holzhauer actually placed the bet against his beloved Cubs in Game 1 of the 2016 National League Championship Series. The Dodgers erased a late deficit with a two-run eighth only to see the Cubs regain the lead on a grand slam by pinch hitter Miguel Montero. Holzhauer’s best friend in Naperville, Ill. owns a framed photo of the greatest sports moment he has witnessed in person, one that Holzhauer calls the worst of his gambling career.

#Jeopardy! champ and pro sports gambler #JamesHolzhauer also admitted he doesn't talk gambling winnings (or losses) with his wife until the end of the season: It's "better that way."https://t.co/5p1KOE2MyN

“Alex blindsided me with this question,” Holzhauer told Sports Handle. “I didn’t have the time to go through all the bets in my head but it was more than $20,000.”

Holzhauer was also asked about his dealings with Trebek, who publicly announced his diagnosis of Stage 4 pancreatic cancer in March. Holzhauer indicated that the extent of his interactions were mostly limited to the 30-second chats contestants hold with the host at the completion of each show. Despite Trebek’s avuncular demeanor, Holzhauer recalled several instances when the host let an expletive or two slip onstage. Jeopardy fans received some encouraging news last week when Trebek announced that his cancer is in near remission.

“I think it’s amazing that he kept showing up to work with everything going on in his life,” Holzhauer said.

Trebek did not travel to Las Vegas for Sunday’s photo shoot.

When the show returns next season, some Jeopardy enthusiasts have inquired whether the format will be modified due to Holzhauer’s success. By requiring contestants to select clues sequentially (i.e. restricting them from choosing a $1,000 clue before the others in a category are picked), Jeopardy! producers could limit their overall winnings. Applying sports betting optimization techniques to his wagering strategy on the show, Holzhauer opted to bet big on more expensive clues when he identifies an advantage and wager aggressively on Daily Doubles.

“We are not changing the format,” a Jeopardy! spokesperson confirmed.

Last week, leading experts from around the world converged upon a conference center at Caesars Palace primarily to develop solutions for gamblers suffering from the pitfalls of addiction. Sports bettors can be prone to addictive behavior, according to one problem gaming expert, especially since some men might view it as an opportunity to achieve instant success. In turn, those who build their bankroll quickly can experience heightened self-esteem that may vanish just as rapidly.

“They definitely will be more at risk because of his success,” said Katie Kirch, program manager of Bettor’s Choice, a gambling treatment recovery program at the Wheeler Clinic in Hartford, Conn. “What gambling provides people is hope so when they hear stories of success they cling to that and develop all these distorted beliefs that they can do it themselves. It’s a false sense of hope.”

For his part, Holzhauer emphasized that he would not recommend professional gambling as a career to a young person. For one, the failure rate is spectacularly high, he said. Unlike a profession such as dentistry that provides a steady income stream, gamblers can go weeks on end without a paycheck. Even worse, an extended losing streak can shatter your confidence.

“Most people don’t know how hard they will take a loss until it happens to them,” Holzhauer said.

Holzhauer was joined on stage by Andy Bloch, a one-time World Series Of Poker bracelet winner and former member of the MIT Blackjack Team. Bloch, who has received two electrical engineering degrees from MIT and a JD from Harvard Law School, does not view the life of a gambler as a glamorous profession. Those who succeed in today’s competitive landscape need to be disciplined, study assiduously and know a good deal of advanced mathematics, Bloch said. Those are just prerequisites before other considerations like luck are factored.

Indeed, Holzhauer tried out for Jeopardy multiple times over the last decade before finally earning his shot. After experiencing considerable heartbreak along the way, Holzhauer told the audience that he could have given up on his dream of appearing on Jeopardy years earlier. Instead, Holzhauer became so emotionally invested in his pursuit that he kept grinding. Holzhauer is working on a first-person essay that details the tribulations.

Another expert, Dr. Jim Kooler of the California Office of Problem Gaming, asked the gamblers if they had any advice for youngsters who are tempted by prospects of instant glorification but often do not contemplate the hurdles in front of them. For teenagers gambling for the first time, many are ill-prepared to handle the emotional and rational decision-making associated with placing a bet, according to the New York Council On Problem Gaming. Furthermore, a human brain does not fully develop until a person typically reaches their mid-to-late 20s, research has found.

“This is a real thing, that’s why we pick 21 as the magic age for when they’re allowed to gamble because different processing power happens around that time,” he said.

Top gamblers also learn how to remove emotional considerations from their gaming decisions. As a member of the MIT Blackjack team, Bloch conducted an exercise on how to place bets without exerting any emotion — often playing hands with fake money until the team learned how to deal with a crushing loss. An even keel is critical in Jeopardy when an incorrect Daily Double response can cripple less resilient contestants. Holzhauer wagered against the Cubs in the 2016 Playoffs in part because he has learned to take his heart out of his betting strategy.

A World Series Of Jeopardy?

As reality TV has proliferated over the last two decades viewers have received an up-close view at the analytical mind of a top professional gambler as he encounters a split-second decision, often with hundreds of thousands of dollars on the line. Chris Moneymaker’s improbable triumph in the 2003 World Series of Poker triggered a boom in televised poker. More recently, Action, a four-part documentary series on Showtime explored how the Supreme Court’s historic sports betting decision impacted the lives of longtime bettors, oddsmakers and gaming experts deeply involved in the industry.

While there are elite poker players and sharp sports bettors alike, there are no professional Jeopardy players, Bloch argues. He is in favor of creating an event where normal fans could enter a tournament to play alongside the likes of Holzhauer. The organizers could charge an entry fee, Bloch said, and hold the tournament in a jurisdiction that offers legalized gambling. Depending on the interest, the prize pool could be in the millions.

“I would love if they could figure out a way to make Jeopardy into something bigger than just a game show,” Bloch said. “It would be bigger than the World Series Of Poker.”

Holzhauer would not be surprised if Jeopardy looks to organize a made-for-TV showdown pitting him against Jennings and another star performer such as Brad Rutter, who defeated Jennings in the show’s 2005 Ultimate Tournament of Champions. Holzhauer, in fact, looks forward to the potential showdown.

#Jeopardy champ Ken Jennings weighs in on challenger James Holzhauer and his all-time record asking @arobach, “can I have my 2004 brain back?” https://t.co/AX4O2aTNxj pic.twitter.com/zmcC7JLrvT

For the moment, it does not appear that Jeopardy will allow gambling on those type of competitions if the event is taped from Sony Pictures studios in Culver City, Calif. But could Holzhauer stake himself if the showdown is held in a location where gambling is legal, say T-Mobile Arena in Vegas?

“Let me know what odds I’m getting and I’ll let you know,” Holzhauer joked.

Holzhauer already has begun to donate some of his winnings to charitable organizations throughout the Las Vegas Valley that benefit underprivileged children in Clark County.

So happy to assist local homeless teens. High School Is Tough Enough! If you can, please consider giving to this wonderful cause. https://t.co/kRYPmqtWaw

“I never really believed I could win 75 shows, but I definitely thought I had a great shot at Ken’s cash winnings record,” Holzhauer said.

Welp, at least James has finally been paid.