The New York Jets have joined with MGM Resorts International (MGM) in a first-of-its-kind partnership making MGM Resorts the Jets’ official gaming partner in an arrangement that goes beyond a basic casino sponsorship, the companies announced Wednesday.

The move is the latest in a recent flurry of transactions uniting the casino/sports wagering world with the U.S. professional sports leagues.

The multi-year agreement between the Jets and MGM is described as “the most comprehensive and integrated gaming partnership in the National Football League (NFL) to date.” 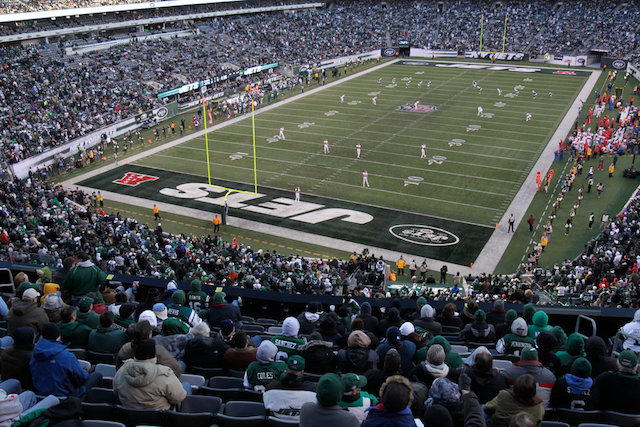 The “I Called It” game will be hosted exclusively on the Jets own app and is sponsored by MGM’s casino and sports betting app, PlayMGM. The newly minted partners say the game includes what they call “pre-play options, upgraded in-play features, expanded prizing, and deeper leaderboards featuring Jets fans.” The game will be up and running through the official New York Jets app during both home and away Jets games.

The partnership apparently falls within the NFL’s new rules that permit gaming partnerships for marketing and promotional purposes, rather than for actual gambling, including sports betting. According to ESPN’s Darren Rovell, the PlayMGM app can be freely promoted because it includes both free games and paid games.

But make no mistake: Sports betting is certainly on the mind in this deal.

“We can promote our app and our casino, which is valuable to us because it could lead to a sports betting customer, even though the NFL won’t allow us to have a specific call to action,” Scott Butera, MGM’s president of interactive gaming, told ESPN. “We love the demographic that Jets fans provide. They have high household incomes in an area where sports betting is now legal.”

So far in New Jersey, where sports betting mobile apps are legal, MGM’s gross sports betting revenue via the PlayMGM platform has been distant to what DraftKings, FanDuel and SugarHouse are so far producing. These are the revenue numbers from the September report by the New Jersey Division of Gaming Enforcement:

MGM also owns the Borgata in Atlantic City, which houses a retail sportsbook.

The Jets home field, MetLife Stadium, is a neighbor to The Meadowlands, a racetrack that is home to sports wagering rival FanDuel’s sportsbook operation. Mobile betting is now available through a wide variety of legal wagering apps in New Jersey.

The Jets-MGM arrangement is the latest in a recent spate of new marketing deals that include the New Jersey Devils and the NBA’s Philadelphia 76ers joining forces with Caesars Entertainment, William Hill US with the Devils, the Dallas Cowboy’s with WinStar World casino in Oklahoma casino and the Baltimore Ravens with Caesars’ Horseshoe Casino in Baltimore.

On Monday, the National Hockey League (NHL) announced a marketing deal with MGM that includes a multi-year sponsorship agreement designating MGM as the official sports betting partner of the league, mirroring MGM’s July deal with the National Basketball Association. Both of these deals include an official league data feed. 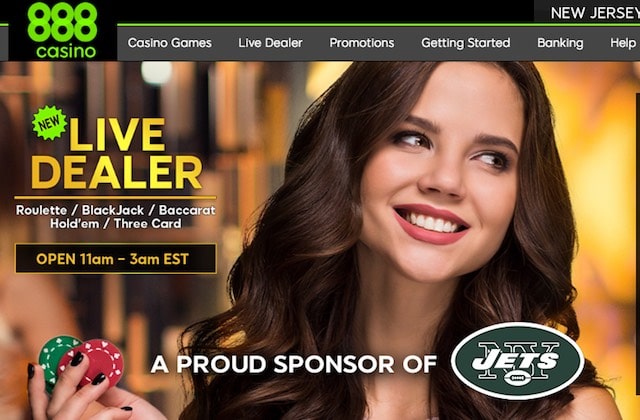 Earlier this week, the New York Post reported another sponsorship deal that also involves the New York Jets: a new relationship with 888 Holdings, based in Gibraltar, which operates an online casino, poker site and as of September, an online sportsbook in New Jersey.

According to the Post, banners with 888.com were displayed on Sunday outside MetLife Stadium (while the Jets were playing the Bears in Chicago), “in the form of several three-story-high, bright-orange banners emblazoned with ‘888.com’ — the gambling site operated by 888 Holdings.”

This comes awfully close to violating currentl NFL policy, which forbids the kinds of relationships discussed above: deals in which sportsbooks and sports betting sites are promoted.

As you can see above, the Jets logo and sponsor status appears on the casino portion of the site, but it does not show on the US-facing 888sport.com sportsbook portal. The NFL has not yet publicly weighed in on the Jets-888 deal.

In effect, both that arrangement and the MGM deal test the limits of what current league rules will allow, and a glimpse at a lucrative new revenue stream for teams and the league. 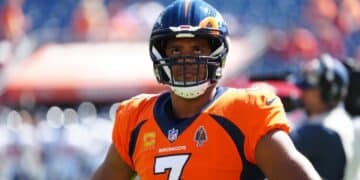