by Donald Emmons
in Opinion, Sports 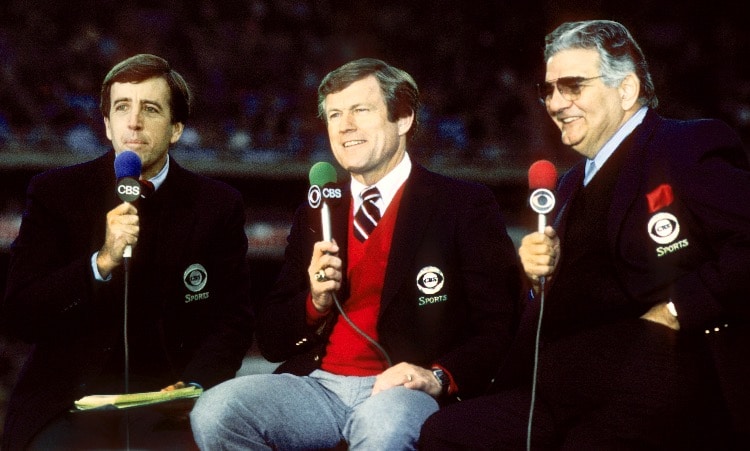 Oftentimes, I sit back and wonder: What would Jimmy “The Greek” Snyder think if he was still around to see what’s happened to his trade?

In particular, The Greek liked to tell millions of television viewers his opinion on who would win or lose games in the National Football League. The legendary Las Vegas oddsmaker reached celebrity status after becoming a regular fixture on CBS’ The NFL Today show. He was the real O.P. (Original Prognosticator) of sports TV.

No. 62: Commentator Jimmy "The Greek" Snyder

The NFL Today with Brent Musburger, Irv Cross, Jimmy “The Greek” Snyder and Phyllis George was the gold standard for pre-game shows and so ahead of its time. The chemistry was genuine and was the must watch pre-game show. Irv Cross will be missed dearly.

At that time, to put it plainly, The Greek’s job was unique to television. Talking about sports gambling on TV wasn’t commonplace. It was like hearing curse words during a prime-time network TV show. It just didn’t happen.

Oh, how times have changed.

Now it’s easy to find oddsmakers on television and social media. They’re on TV daily, predicting winners and talking point spreads and odds. Many have their own sports betting shows.

During The Greek’s time, he’d sit with Musburger in front of a studio scoreboard and opine on why he thought teams would win or lose a contest. However, phrases like a “team will cover the spread” or “take the points” or “bet on the underdog” weren’t permitted to be said during the broadcast, as words alluding to gambling were forbidden.

Yet The Greek understood his trade and did more during his roughly five-minute segment with Musburger than pick winners. He offered nuggets of information about teams and players, and shared “inside stories” about NFL owners and the league. He’d talk about a matchup and reveal his opinions about which team had the best defense, the best offense, and the best special teams.

And just before he’d share with Musburger his prediction about a specific game, complete with a final score, The Greek would talk about “intangibles” to look for during a contest. In short, he was an oddsmaker who became the first NFL insider on TV.

Highs and lows of popularity

No one previously with a Las Vegas Strip gambling background had ever reached such acclaim in the sports media. The Greek carved out a niche in sports media for guys who liked to talk sports wagering. He brought not only information to The NFL Today set each week, but he also added to the entertainment and appeal of the show, which reigned as the highest-rated program in its time slot during The Greek’s tenure.

The Greek became more than just an oddsmaker and NFL insider. The Steubenville, Ohio, native reached celebrity status. He made cameos in movies and was parodied on TV shows.

It wasn’t until he made some racially insensitive remarks about African-Americans in 1988 that The Greek’s shine as a sports personality suffered any significant scrutiny. CBS fired The Greek for his comments on Jan. 16, 1988, and his career in sports broadcasting came to an abrupt end. Snyder passed away at the age of 77 after suffering a heart attack in 1996.

The Greek didn’t live to see how dramatically the sports world would change when it came to sports betting. Much of what he couldn’t talk directly about on TV is now daily discussion on sports talk shows. From point spreads to the over/under, nothing is off limits.

It’s literally a new world when it comes to the acceptance of sports wagering in the U.S. More than 30 states have some form of legalized sports betting. That wasn’t the case when The Greek was riding high as a key figure on The NFL Today.

Seriously, I wonder: What would The Greek think if he was still around to see what’s happened to his trade?