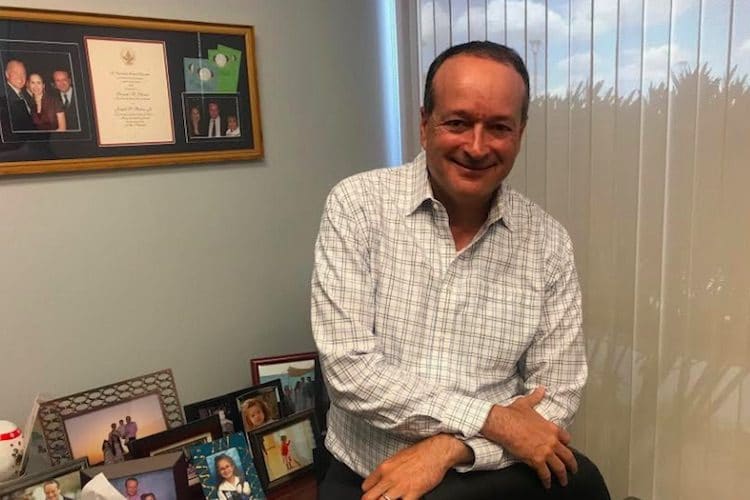 Joe Asher, CEO of William Hill US, has quickly become one of the most powerful voices in the rapidly expanding realm of legal sports wagering in the United States. William Hill just in the past year since PASPA was ruled unconstitutional has:

To shed light on these developments and more, Sports Handle recently caught up with Asher in his Las Vegas office.

Sports Handle (SH): What is the biggest surprise for you in the in first year since PAPSA was overturned?

Joe Asher (JA): There haven’t been any huge surprises, quite frankly. The roll out (of sports betting nationally) is what we expected. The various states have to go through their legislative processes. The pace has not been a surprise. I’ve heard some people say it’s been slow, but that’s not what I’ve said. If there’s one thing maybe it’s the level of the embrace from the sports leagues as quickly has it has happened. That’s been a little bit of a surprise to me. They had fought sports betting so passionately for so long to then accept the new reality so quickly. Especially the NHL who has really helped the industry get off the ground. I just can’t say enough good things about the NHL.

SH: Generally speaking, what are the various states doing right and what are they doing wrong?

JA: It’s not my decision as to what states do. It’s up to the various elected representatives and the people to decide. Then we work within the legislation and regulatory framework that’s adopted. It’s not my position to tell the citizens or the legislature in states what to do.

SH: Is what we’re hearing about the rising popularity of in-game betting true? How popular is it?

JA: It’s about 30 percent of our business here in Nevada and growing. What’s misunderstood is that people are still betting on the outcome of the game or a defined subset of the game. What you’re doing (with in game betting) is taking a three-hour game and chopping it down to a smaller time frame. We pioneered betting baseball on just the first inning. It’s become very popular. What some people don’t understand is that it (in-game betting) is not [betting on] balls or strikes or run or pass. Or, is Steph Curry going to make this three pointer or not?

But, in-game wagering is a growing and important part of the business. It can keep people engaged in the game throughout and that’s where I think the biggest opportunity is for the sports leagues. Just increase the engagement. If you’re betting on game, then you’re certainly watching it.”

SH: What’s your view on Tennessee, which is poised to have online-only wagering as opposed to brick-and-mortar operations as well?

JA: As we’ve done here (Nevada) for years it’s both.  We like the retail business and we like the mobile business and to some extent I think they support each other. Obviously, it’s a model we’re comfortable in Nevada and New Jersey. But, if some other framework is adopted, we’ll work within it.

SH: What state has done the best job so far in legalizing to getting ready to legalize sports betting?

JA: Nevada has done a great job of running sports betting for many, many years. Since I started my sport betting company (Brandywine, later acquired by William Hill) in Nevada in 2008 I understood what the rules are and worked within those rules. As different states make the rules, people look at things differently and come to their own conclusions about how to operate.

SH: How does William Hill deal with the state lottery people when it comes to sports wagering? Is anything done differently?

JA: Well, you need to have somebody regulate it and we’ll work with them. We’ve been in Delaware since 2009 and it’s run by the lottery. Somebody regulates it, whether it’s the lottery or some stand-alone Gaming Control Board like you have here in Nevada or the Division of Gaming Enforcement like you have in New Jersey, that’s up to the legislature to decide. Whomever they tell us to work with, that’s who we work with.

SH: Any bitterness over the fact that Monmouth Park and William Hill led the way in getting the law overturned with little assistance from others such as Caesars, MGM, FanDuel, DraftKings and others?

JA: Dennis Drazin (Monmouth Park operator) is the guy who got this done. We contributed but Dennis’s contribution was much greater. I just can’t say enough good things about Dennis Drazin and the work he did. He’s the one guy who really made this happen. He gets some recognition but not nearly the recognition he deserves. No one ever thought this would be a monopoly. The idea is to have a legal market so you don’t have the situation that existed historically and still exists in most of states. What you have is this pervasive black market where it doesn’t serve anyone but the criminals who operate it. It doesn’t protect consumers, it doesn’t raise tax revenue, it doesn’t create nearly as many jobs that the legal market is creating. We’ve added a couple of hundred people alone over the course of the year.”

SH: Any view about the fantasy operators now getting involved in full-fledged sports betting?

JA: Everybody should play by the same rules. My view is and always been that daily fantasy sports betting has always been gambling. It was gambling and is gambling and that’s why you saw the regulated gaming companies not involved in that business and so, as I said, the decisions on who gets licensed and who doesn’t is up to the regulators in the various states. But, clearly, everybody has to play by the same rules.

SH: What are your views on proposed “integrity fees” sought by some sports leagues? Would you stay out of a market that might have them?

JA: No state has adopted an integrity fee, as yet. That’s because it’s a ridiculous policy. That revenue could be tax revenue and benefit all the citizens of the state. That money should not be directed to wealthy private parties. The whole concept of the integrity fee is kind of crazy. Look, it’s not something the NHL or the NFL, to their credit has ever pushed for. The idea that’s there’s a greater threat to integrity in a legal and regulated market than has historically existed in the black market, I just think that’s silly.

One of the things I’m deeply focused on it that there’s a deeply ingrained black market in this country. People have been betting with their bookies for a long time. The illegal bookmakers do not pay integrity fees, they do not pay gaming taxes, the have no compliance costs, they offer credit. They don’t report anything to the IRS and it is not easy to supplant that, especially in high tax jurisdictions. But, the harder you make it on the legal market, it just strengthens the black market making it harder to move customers out that market. Anything that increases the cost of doing business in the legal market, I think is bad, overall. That certainly encompasses royalty fees, integrity fees or whatever you want to call them.

SH: Anything you and William Hill might have done differently, in retrospect?

JA: Sure, there are plenty of things you’d do differently. Overall I think we’ve done a pretty reasonable job. Our team has worked incredibly hard. After the oral arguments (heard by the Supreme Court) in 2017, that’s when we really started gearing up. We’ve also been focused on not neglecting our Nevada business. I just did a trip across Northern Nevada because we’re not going to take our eye off our Nevada business because right now that’s what’s really funding the expansion opportunities.