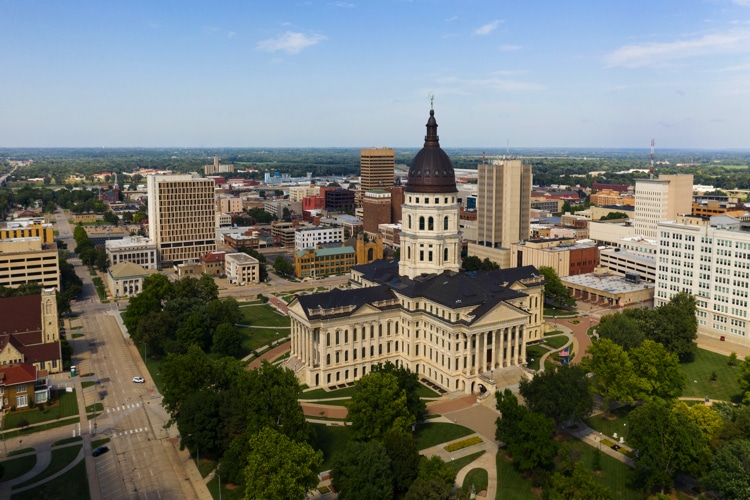 It’s not the “Show Me State,” but Kansas bettors again showed out in October.

The Kansas Lottery reported sports wagering handle just shy of $190 million in October, following up a strong September launch with an 18.3% improvement in accepted wagers. That lifted the two-month total to just over $350 million.

Gross revenue dipped to $18.6 million, as the state’s four retail venues and six mobile sportsbooks cooled off to a 9.8% hold for October. The Sunflower State’s sports wagering bow coincided with a historic rout of the betting public, which led to an outsized revenue haul of $22 million and a 13.7% win rate.

Bettors continued to work through promotional offers, though the $9 million in credits was barely more than one-quarter the $34.4 million lavished upon the new market by the sextet of operators. Adjusted revenue totaled $9.2 million, a positive swing of close to $22 million from September that left the overall amount still more than $3.5 million in the red.

Four of the six mobile operators did not achieve a positive adjusted revenue for the month, between October’s totals and the negative carryovers permitted to be brought through from September. This meant they paid no state taxes. Of the $141,088 in overall tax receipts, approximately 63% came from Barstool Sportsbook and Caesars Sportsbook.

DraftKings still No. 1 in handle, revenue

DraftKings was one of the four mobile sportsbooks that did not pay state taxes in October, but it moved closer to the break-even point after totaling $4.4 million in adjusted revenue. The online titan’s promotional spend slowed dramatically from September, dropping from $17 million to $3 million that was deducted from its gross revenue of $7.7 million. It carried over close to $3.5 million in negative adjusted revenue into November.

FanDuel, though, has a far better chance of being taxed when November’s numbers are tabulated. Its promotional spend of $3.2 million was less than half the $7.4 million from launch month, though its $2.8 million in adjusted revenue was less than half the $6.1 million reported in gross revenue. FanDuel’s adjusted revenue after the first two months is minus-$86,000, and it is the closest to break-even among the four operators who carried negative adjusted gross revenue (AGR) into November.

PointsBet, however, had a slightly different outcome, as its negative AGR resulted solely from its October performance. The Australia-based book had a 3.2% hold on $2.6 million handle, resulting in less than $85,000 in gross revenue. Promotional credits and other deductions were more than double that amount, leaving PointsBet with an AGR of -$106,464.

Along with FanDuel, BetMGM was one of two mobile operators to post back-to-back double-digit holds, but a drop of six percentage points to 10.5% contributed to a 48.8% drop in gross revenue to $2.4 million. Its promotional outlay was approximately 75% of that amount, which meant it applied $560,000 to the nearly $3.3 million in negative adjusted revenue carried over from September. BetMGM’s $2.7 million carryover into November is the second-largest among all operators.

As for Barstool and Caesars, both saw bettors regroup against them, as they each had drops of more than five percentage points when it came to holds on gross revenue. Barstool still had enough to top $1 million in gross revenue for the second straight month, and that was more than enough to absorb the negative-$27,221 it carried over into October, resulting in an overall net AGR of nearly $650,000 and a tax bill of $64,233.

Checking out the retail doings

While Barstool may be trying to nail down being the fourth mobile option in Kansas, it is the dominant brick-and-mortar venue in the early going. Its Hollywood Casino sportsbook generated more than $6.5 million handle, accounting for 80% of the overall retail wagering amount, but bettors limited the venue to a 5% hold as the book claimed slightly more than $325,000.

Kansas Star’s FanDuel-powered book was the other key retail location, with $1.5 million in wagers accepted and $188,317 in revenue thanks to a 12.5% hold. Boot Hill Casino, which can draw bettors from Oklahoma, Texas, Colorado, and even New Mexico, reported $191,201 in its first full month of accepting bets via DraftKings. The $24,742 in revenue provided a hold of 13%.