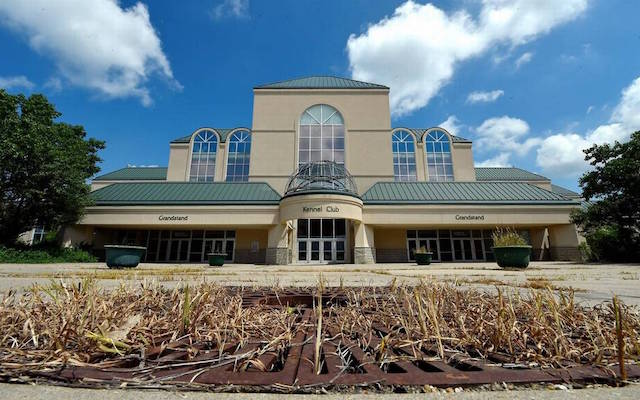 The start of 2018 legislative sessions in statehouses across the country has seen our U.S. sports betting legislation tracker light up like the scoreboard at a Golden State Warriors game. The most recent state with a bill on the table that would legalize sports betting is Kansas.

Last week Kansas’s Committee on Federal and State Affairs introduced House Bill 2533 (HB 2533), which would make sports betting on professional and collegiate sports legal in Kansas — but only “on the premises of a racetrack gaming facility.”

Interestingly, currently in the state there are zero operational horse or greyhound tracks, both of which used to be quite popular in Kansas before becoming unprofitable. But an additional bill introduced one day after the sports betting measure, House Bill  2545 (HB 2545), indicates that there’s momentum to resurrect the shuttered racetracks, and sports betting would be an additional revenue source to keep them afloat.

First here’s the language of the fairly lean HB 2553, which would become a part of the Kansas Expanded Lottery Act (KELA) of 2007, which paved the way for three new casinos in the state. 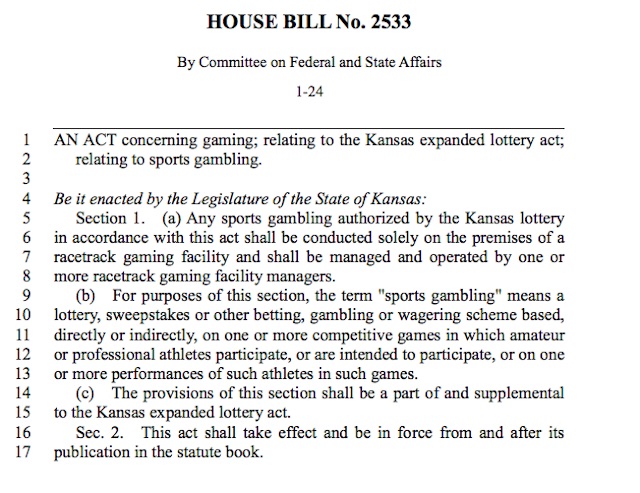 Not much doing there but there but viewed in conjunction with HB 2545 it makes sense. After efforts in recent years to reboot Kansas’s racing industry, it appears they’re giving it another crack. Here’s a couple explanatory provisions at the top of the bill:

WHEREAS, In light of the historic support for the availability of horse and dog racing in the state of Kansas, the long history and heritage of the greyhound and horse industry in the state and the support for the availability of electronic gaming machines at race facilities, this act is aimed at resurrecting these well-known and existing facilities;

WHEREAS, An economic study has estimated that passage of this act and the resulting capital investments in the racetracks will result in a significant number of new jobs and a significant increase in state and local tax revenue without the need for economic development incentives;

It all boils down to improving the Kansas economy, creating jobs and more tax revenue. This comes in the wake of a disastrous tax cutting plan in 2013 that knocked the business tax rate to 0% and ultimately created a massive budget shortfall.

As for the sports betting, it would take place only at the tracks per (the current version of) HB 2533. “Racetrack gaming facilities” would handle at “locations where electronic gaming machines are operated, managed and maintained.”

Which Tracks Are Coming Back and What About Casinos That Might Want Sports Betting?

The track likeliest to come back if the two house bills do pass is The Woodlands in Kansas City. It would be surprising if casinos, including the Kansas Star Casino in Mulvane, owned by the Nevada-based Boyd Gaming, does not cry foul over casino exclusion in the measure. That’s what lobbyists are for, although the legislature may simply be looking to avoid running afoul of existing compacts between commercial and tribal casinos.

Although in the other corner is Woodlands’ new owner Phil Ruffin, also the owner of Treasure Island Hotel and Casino on the Las Vegas strip. He bought the ol’ racetrack in hopes of reviving it as a racino.

The sports betting bill obviously needs more meat on the bones — HB 2533 is devoid of any regulatory framework for sports betting or mention of a tax rate —  but it’s a start and yet another state flashing yellow.

Of course all of these states await a decision in Christie v NCAA, aka the Supreme Court Sports Betting case. If New Jersey (“Christie”) prevails, the 1992 federal law banning sports betting outside Nevada might be ruled wholly unconstitutional, opening the door for Kansas and a growing number of states. A decision is expected in April or May.

NBA Pushes For Legal Sports Betting in New York, But Wants Piece of the Action

Chad Millman of The Action Network Joins ‘The Hedge: Why I Gamble With Jimmy Shapiro