Kansas lawmakers learned on Tuesday that passing a law to allow sports betting in the state may not be as simple as it sounds. And that even if they do pass Kansas sports betting legislation, the state likely won’t experience the kind of revenue windfall some have imagined.

Lobbyist Whitney Damron, on behalf of Kansas Entertainment, LLC, which owns Hollywood Casino, was among those who argued against the passage of HB 2752, a bill in the Kansas House that would allow for sports betting in the state, but also gives the major professional sports leagues the “integrity fee” they seek as well as control over the data used by sportsbooks to grade wagers. Damron, who testified at a House Federal and State Affairs hearing on Tuesday, argued against HB 2752. In addition to verbal testimony, Damron provided written testimony, which included a graphic chart showing where revenue from sports betting would ultimately go.

With regard to the integrity free – a 1% off-the-top cut that translates into 20-25%  of a sportsbook’s gross revenue – Damron had this to say:

“No other state or jurisdiction in the world has such an ‘integrity fee’,” Damron said in his written testimony. “And Kansas Entertainment suggests Kansas should not be the first.” 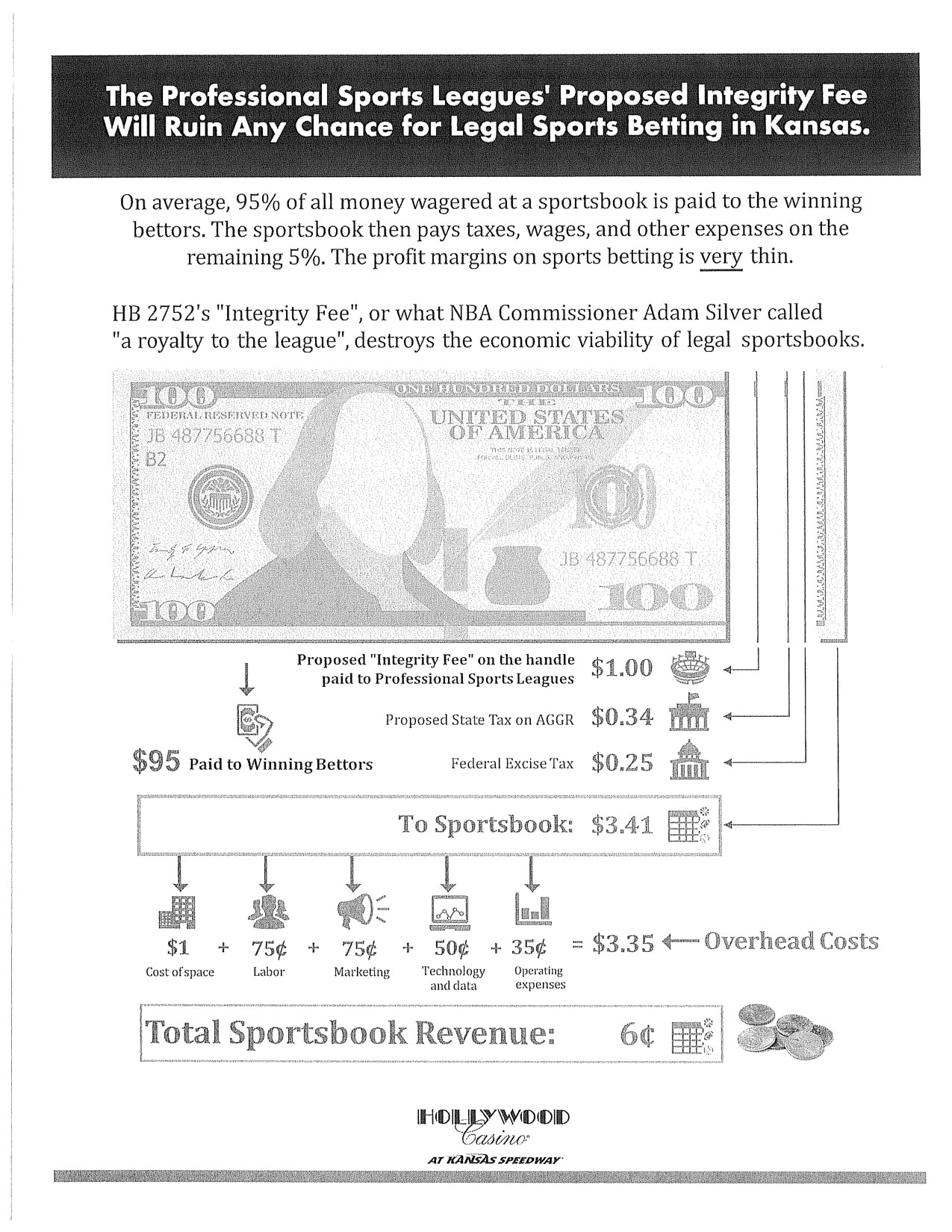 The chart provided by Damron suggests that with the 1% integrity fee, sportsbooks would make a profit of 6 cents for every $100 wagered, therefore “destroy(ing) the economic viability” of sports betting in Missouri. According to the chart, 95 percent of every wager is ultimately paid out to bettors, leaving only 5% to cover expenses and for profit.

Among the comments from lawmakers:  “This is more complex than I thought. I guess I was pretty naive on this deal. I feel like if we don’t do this right, we can really mess it up.”

During the hearing, which was clearly an educational experience for lawmakers, interested parties were invited to speak. Besides Damron, a representative from the Major League Baseball was in attendance. MLB and the NBA are carrying the torch for the “integrity fee” and Kansas isn’t the first state that has balked at what has also been called a “processing fee” or a “royalty” by NBA Commissioner Adam Silver.

Calling Out The Leagues

In fact, last week, Connecticut lawmakers called out the leagues, with Representative Daniel Rovero (D-Killingly, Putnam, Thompson), going so far as to say he was “glad I didn’t get involved with you people,” when talking about running a business.

In Kansas, the NBA and MLB didn’t fare much better. Major League Baseball Vice President, Investigations & Deputy General Counsel Bryan Seeley tried vainly to make the point that the leagues deserve compensation, but was shot down.

“We’re bearing virtually all of the risk in a legal betting atmosphere” Seeley said. “…In terms of damage to our brands we could be in the tens of millions of dollars if there’s another Pete Rose or Black Sox Scandal. So there are risks to us not shared by casinos.”

“It is simply fair to compensate us to bet on our games,” he continued. “We don’t spend billions so people can bet on them. If an industry is going to (profit) on that, we should share in that.”

To which a lawmaker queried, “Do you guys still use tax dollars to build stadiums?”

“I think the answer to that is yes,” replied Seeley after a pause.

Since West Virginia passed legislation earlier this month to allow sports betting, but did not include any of the pro leagues’ demands in its new law, Kansas is just the latest state to question why the leagues deserve a cut.

Nevada, the only state in which it is currently legal to place a sports bet, does not pay any of the pro leagues a fee to use their product. And since the tongue lashing the NBA and MLB got in Connecticut, Kansas neighbor Missouri appears to have backed off the idea of paying an integrity fee. While lawmakers in that state drafted several bills that do include the fee, the latest iteration does not. And legislative insiders say there is less and less desire to placate the leagues.

Missouri’s actions may well have sparked Kansas lawmakers to reconsider the integrity fee. After all, if a state without the fee can offer more favorable odds, bettors are likely to spend their money where the payout is better. And Kansas and Missouri not only share a border, they share a major city. As one lobbyist pointed out, geography in this case makes it not at all unreasonable to believe that patrons would “cross the border” for better odds.

Three casino lobbyists at Tuesday’s hearing said they support sports betting in Kansas, and all were against paying the integrity fee or allowing the pro leagues to control the data used. They all also pointed to low margins and, in fact, allowed that while casino operators would create space for sportsbooks, were quick say the financial benefit would be limited — and that it’s unlikely that casinos would create sportsbooks at all should a law with the integrity fee pass.

“We believe in sports betting, but don’t see it as particularly high volume, high revenue,” Damron said. He went on to predict a $150 million sports betting industry in Kansas, and said that at $200 million, the state should only expect to net $5-$10 million in revenue.

Richard Clamp, the Director of Governmental Affairs for Boyd Gaming, which owns the Kansas Star Casino, agreed. “It’s a low-margin business for sure,” he said. “But there are two reasons to do it: It drives visitation, which will spur spending on hotel rooms, food and beverage and other games … and to make legal what is now an illegal activity, so we can at least cut into” the illegal industry as much as possible.

Legal or not, Kansas lawmakers were clearly uncomfortable with the idea of an integrity fee or with allowing the pro leagues to control the data related to sports betting. While Tuesday’s hearing was dubbed “informational,” there is no question it opened the eyes of the people who will ultimately craft Kansas’ sports betting law.