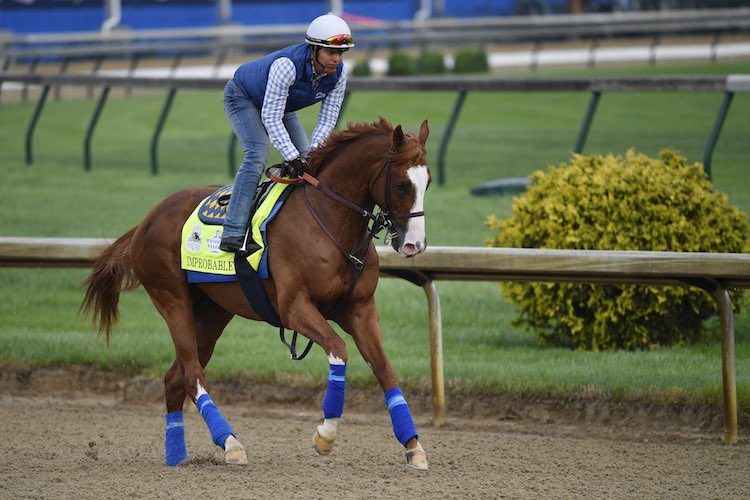 When Omaha Beach began coughing during a Wednesday galloping session, the spell prompted Mandella to consult with a veteran equine veterinarian at Churchill Downs. A brief examination revealed that Omaha Beach had an entrapped epiglottis, a throat condition that promptly ended his shot at the Triple Crown.

Based on the recommendations of  Dr. Foster Northrop, a Louisville-based veterinarian, Mandella decided to scratch the Derby favorite. Following surgery on Thursday, Omaha Beach could miss a minimum of three months.

“When a horse entraps, it really limits their breathing,” Northrop said at a Thursday press conference. “It blocks probably about a third of the airway. And in a race of this magnitude, that’s too much to give up.”

Oddsmakers from TwinSpires.com responded on Thursday by installing Game Winner as the new 9/2 favorite. Over the last 24 hours, Wood Memorial winner Tacitus has garnered considerable support from bettors at Churchill Downs.

On Friday, Tacitus unexpectedly overtook Game Winner for top betting choice. After opening as co-third choice on the morning line at 8/1, Tacitus dropped to 9/2 on Friday morning. Tacitus is followed by Improbable and Maximum Security, both at 5/1, Game Winner (6/1) and Roadster (8/1).

The loss of Omaha Beach provides a golden opportunity for a trio of horses trained by Bob Baffert, a five-time winner of the Derby. Improbable, the runner-up of the Arkansas Derby to Omaha Beach, will break from the No. 5 post. Two other Baffert entries, Game Winner and Roadster, will occupy outside spots from Churchill’s auxiliary gate.

Roadster, the winner of last month’s Santa Anita Derby, will attempt to buck a dubious trend.  Piloted by jockey Florent Geroux, Roadster will attempt to become the first horse in Kentucky Derby history to win from the dreaded No. 17 post. Entering Saturday’s Derby, horses from the 17 gate are 0-for-40 in the first jewel of the Triple Crown. Roadster may also have trouble handling the 1 1/4-mile distance at Churchill Downs.

“He ran a mile and an eighth and won the Santa Anita Derby, he could get the mile and a quarter if needed,” said Johnny Avello, director of sportsbook operations for DraftKings Sportsbook. “He’ll have a little rougher time because most of his races have been from inner posts and now he is trying to come from this post way on the outside.”

Baffert’s stronghold on several top horses in the field could actually create favorable odds for the trio. Hardened bettors and newcomers to the sport often display a tendencies for picking hot trainers. As Churchill Downs oddsmaker Mike Battaglia put it at Tuesday’s draw, “all the Baffert money will go on three horses, instead of one.” Hence, the elevated price on all three at odds above 4/1. Last year’s favorite Justify entered the Derby with odds of 3/1 on the morning line.

With rain in the forecast in Louisville throughout the afternoon, the condition of the track will play an enormous role in determining the winner.

While there is only a 10 percent chance of precipitation at 1 p.m. ET, the probability of rain increases to 85 percent at 4 p.m., according to local weather forecasts. By 6 p.m., roughly 50 minutes before post time, there is about a 70 percent chance of rain at Churchill Downs. The soggy conditions could create a sloppy track for the Derby for the second straight year.

More than a quarter of the 19-horse field owns a victory on a wet track, America’s Best Racing reported. Among the favorites, Maximum Security, Tacitus and Improbable, have finished in the money on off tracks. Improbable lost narrowly to Omaha Beach on a sloppy track in the Arkansas Derby.

Since the Kentucky Derby established a new points system for qualifying in 2013, several trends have emerged. The favorite has captured The Run For The Roses in six straight years, including two Triple Crown winners in American Pharoah (2015) and Justify (2018). The majority of the favorites have displayed a key characteristic.

The horses not only exhibited front-end speed through the opening turn, they possessed tactical speed throughout the entire race. Horses with tactical speed can push the pace when their jockeys spot slow, early fractions and can rate or ease up when the pace becomes too hot.

Ironically, four horses with inside posts — War of Will, Tax, By My Standards and Gray Magician — may need to use their tactical speed to get a clean break, Avello said. By exerting too much effort at the start, the horses may be spent by the final furlong, he noted. Maximum Security, a likely pace setter, will break to the outside of two speed horses in Improbable and Vekoma. Avello will consider Maximum Security if the odds remain near his morning line price of 10/1.

Avello has also been impressed with the tactical speed shown by Game Winner, Vekoma (23/1) and Improbable during the Derby Trail. On the other hand, he plans on tossing several longshots that will break from the outside. When considering longshots for trifecta and superfecta wagers, Avello advises bettors to throw out Long Range Toddy, Spinoff and Country House, all priced above 40/1 on Friday morning.

For those living in Nevada or visiting Las Vegas this weekend, the Palms Race & Sports Book operated by CG Technology is offering a surfeit of entertaining props. In head-to-head betting, Roadster (minus-135) is favored over Tacitus (plus-105), while Game Winner (minus-140) is expected to finish ahead of Improbable (plus-140). If you think a horse will go wire-to-wire, you can win $650 on a $100 bet.

A unique prop also allows horse players to bet on the first letter of the winning horse’s name. There are 11 horses in the field (minus-180) with first names that start with letters “A to M.” The group includes three highly-regarded selections in Improbable, Maximum Security and Game Winner. On the other side, the eight remaining horses have names that begin with letters “N to Z.” Although Tacitus and Roadster are included in the group, the side is a substantial underdog (plus-150).

The majority of Las Vegas books do not expect a Triple Crown winner in 2019. If a horse wins the Triple Crown for the second straight year, The Palms will pay out Plus-600 on a successful bet. Under the more likely scenario, if the Kentucky Derby winner fails to capture the Triple Crown, the prop will only pay Minus-900. At Station Casinos, additional money on the “No” side on Thursday evening moved the line to Minus-800.

The right strategy without breaking the bank

When formulating your ticket for exotic bets, consider the pace scenario. A quick pace over the first six furlongs (three-quarters of a mile) could enable a closer to hit the board with a late run. If you think a horse like War of Will or Vekoma will press Maximum Security for the lead, expect testing early fractions.

In 2012, Bodemeister set near-record fractions of 22.32 seconds for the opening quarter, 45.39 for the half and 1:09.8 for six furlongs. Eventually, Bodemeister tired and lost to a fast-closing horse named I’ll Have Another. For Saturday’s 145th Kentucky Derby, Tacitus, Win Win Win (15/1), Code of Honor (11/1) and By My Standards (14/1) have all shown an ability to close effectively. If the pace is slower, there is a better chance that a forwardly placed horse such as Maximum Security, Game Winner, Improbable, Vekoma and Roadster can finish in the money.

Since 2005, a $2 trifecta payout at the Kentucky Derby has averaged $16,207, according to figures compiled by Horse Racing Nation.com. A bettor lucky enough to hit a $2 superfecta over the same period has won an average of $157,621.

Unless you can pool your wagers with several friends, exotic bets can get pricey. For instance, a $2 superfecta box with seven horses will cost the ticket owner $1,680. One alternative is to use a part-wheel strategy for both trifectas and superfectas. If you play your cards right, you can place a $2 trifecta part-wheel with 20 combinations for only $40. A 10 cent superfecta part-wheel with 144 combinations will cost less than $15. In three of the last six years, a 10 cent super has returned more than $1,950.

On the off chance that a double-digit longshot ends up in the winner’s circle, your return-on-investment (ROI) can increase exponentially. Since 2008, Mine That Bird, I’ll Have Another and Animal Kingdom have all won at odds of 15/1 or above. Mine That Bird paid $103.20 on a $2 win in 2009.

Ten years ago, it was Mine That Bird with a 6 ½-length shocker in the Kentucky Derby. https://t.co/kO1wAChcAq

“In a race like this anything can happen, it hasn’t happened over the last five, six years but we’ve seen some bombs come in,” Avello said. “It’s always possible.”