Kentucky Governor: ‘The Time Is Now’ For Sports Betting 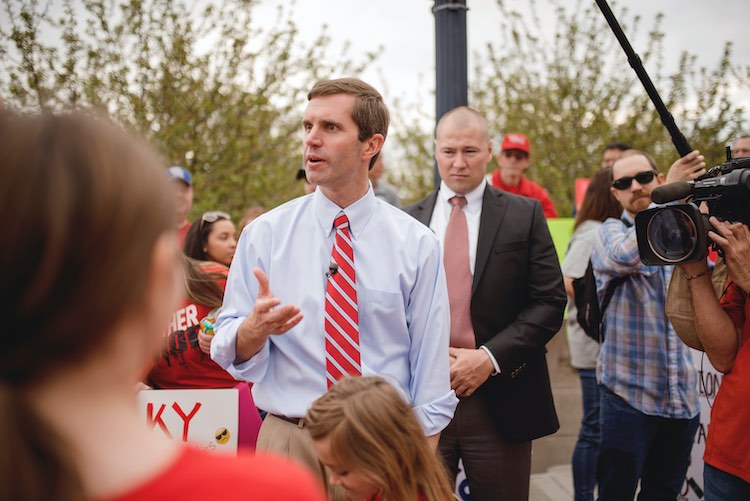 In a full-throated endorsement on Thursday of legal sports betting in Kentucky, Governor Andy Beshear held a press conference all but demanding that the state General Assembly pass HB 137, the bill that would make sports wagering legal in a state best known for bourbon and horse racing.

Since moving the bill out of committee in early January, House Representative Adam Koenig has been able to rally enough votes to legalize, but not enough Republican votes to make it clear the Senate would also support the measure and keep his party comfortable with the decision.

Beshear, a first-term Democrat, called for legal sports betting in his State of the Commonwealth address, but he clearly felt that lawmakers were in need an even bigger kick in the pants. He told the story of a Kentuckian who went to place Super Bowl bets in neighboring Indiana but wasn’t able to eat or stay in Indiana because restaurants and hotels near sportsbooks were jammed.

“We have other states that aren’t just eating our lunch, they are serving our lunch and taking those dollars, too,” he said. “Indiana sports betting spots were bustling this weekend. Lt. Governor Coleman also knows first-hand what we’re missing out on. She took a 15-minute drive across the Ohio River this last September, when a new sportsbook opened up for business, and this last Saturday when Lamar Jackson won the MVP, she won $95 on her $5 bet.”

The tone of the press conference was somewhat jovial and certainly positive, as it marked a watershed moment in state politics when representatives from education, business, firefighters, police, pension funds, and others stood together in support of HB 137. There were multiple jokes about how unusual it is to see such broad support from groups that are often in opposition.

“I don’t know about you all, but I feel like I’ve been doing sports wagering for years,” said Ashli Watts, president of the Kentucky Chamber of Commerce. “It’s called the Derby. This really is just an extension of our signature industry. … The passage of sports wagering would only continue to build upon this growth in the commonwealth.”

The press conference came on the heels of Senate Majority Leader Damon Thayer telling the Louisville Courier-Journal that he “think(s) we’ve got the votes to pass it if it gets here anytime soon.”

The amount of outright lobbying by politicians on this issue is unprecedented.

Thursday’s press conference was all about explaining why sports betting should be legalized in Kentucky, and the key reasons shared were more money for education and the state’s pension fund, which Jim Carroll, president of the Kentucky Government Retirees characterized as “the worst-funded pension system in the United States.”

Kentucky an ‘island’ when it comes to sports betting

Kentucky is losing sports betting dollars in nearly every direction — among its border states, West Virginia and Indiana already have live sports betting, Illinois and Tennessee both have legalized but not yet launched, and lawmakers in Missouri, Ohio and Virginia are all considering, and in some cases moving, sports betting during their legislative sessions.

“Typically when a bill like this has that kind of broad support, it moves pretty quickly,” Koenig said. “It’s time that we take the opportunity to not be an island in Kentucky. We’re surrounded by West Virginia and Indiana where it’s legal, by Tennessee and Illinois where it will be (live) in a few months.  … Let’s give grown adults an opportunity to make their own decisions.”

The result of not passing HB137, the sports betting Bill, is that people like this Mount Washington Kentucky resident will continue to go out of state to make his legal sports bets. In his interview, he doesn’t talk about making money; it’s about entertainment. #kyga20 pic.twitter.com/wPA4gNW48F

So while there were plenty of jokes about sports betting, the ultimate goal is money for Kentuckians. Beshear said the state projects $22-$25 million in revenue to the state once sports betting is fully mature. For comparison, Kentucky has a population of 4.4 million people, while New Jersey, with nearly 9 million people and access to bettors from New York City, brought in $36.5 million in tax revenue in 2019. New Jersey sports betting went live in June 2018, and the state doesn’t require in-person mobile registration, which HB 137 would require for the first 18 months. The bill calls for a 9.75% tax on gross gaming revenue on retail sports betting and 14.25% on mobile.

But the details weren’t what Thursday was about. It was, rather, Beshear’s effort to jump-start the discussion in the House and, with any luck, get a vote.

This issue “crosses all party lines, it crosses all demographics, and it’s one where the time is here and I am tired of trailing other states,” Beshear said. “Let’s make sure that this time next year, we haven’t sent a whole bunch of Kentuckians across the river or to other states for their Super Bowl wagers, let’s make sure we act in this legislative session to keep these dollars in Kentucky.”

The Kentucky General Assembly is set to adjourn on April 15 and Thursday was the 22nd legislative day out of 60. The House goes into session almost daily at 2 p.m. CST.