It was a busy summer for sports betting in Kentucky and it’s about to get even busier. Next week, the Interim Joint Committee on Licensing and Occupation will hold an extensive hearing exploring sports betting, according to co-chairman Adam Koenig. It will be the second interim joint committee meeting since Aug. 30.

On top of that, the NFL, NBA, Major League Baseball and PGA Tour have registered lobbyists in Kentucky, according to the latest update of the state’s registered lobbyists, dated Sept. 26. The move shows that the leagues believe that the Kentucky legislature will move on legalizing sports betting in 2019, and that they want a piece of the action, which means requiring sportsbooks to purchase “official league data,” among other things.

“I think they know there are going to be efforts and how successful we are is yet to be seen,” Koenig told Sports Handle on Tuesday.  There will likely be  “multiple bills and they want to be ready.”

“A lot of folks don’t understand that,” Koenig said. “(Sports wagering revenue) … it’s not even close.”

Koenig has spent time over the last year educating himself on the intricacies of legalizing sports betting. There is no one-size-fits-all law that will work in every state, and Kentucky’s vibrant thoroughbred racing industry is a wrinkle that most other states don’t have to contend with. The state is home to the most storied track in the nation, Churchill Downs, and the industry is key to the economy — and identity — of the state. To that end, its likely that any sports betting law in Kentucky will call for some revenue to be earmarked for racing purses.

To that end, next week’s hearings, which will are scheduled for 10 a.m. on Oct. 12, will be an educational opportunity for Koenig’s colleagues. He’s put together a seminar of sorts, including a professional who will provide an overview of legal sports wagering and representatives from the state lottery, a potential sports betting regulator for the state.

Next Week’s Hearing to Be an Educational Forum, But Professional Sports Leagues Aren’t Invited.

Noticeably absent from the agenda are representatives from the professional sports leagues.

“The pro leagues have offered, but I think we need to get our people up to date first before we start throwing in the pro leagues,” Koenig said. “When the lobbyists got confirmation that they were (registered in Kentucky), they called me immediately to tell me. The first words out of my mouth were ‘You’re not getting an integrity fee.’ Vegas has been taking sports bets since 1949 and they don’t pay an integrity fee, so does that mean that they were not on the up and up?
Among the registered lobbyists are Dan Spillane (NBA), Jeffery Hartgen (NFL), Morgan Sword (MLB) and David Miller (PGA). 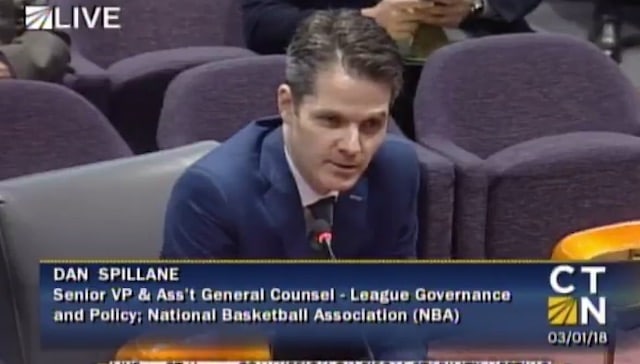 Spillane is no stranger to testifying — he jousted with state lawmakers in Connecticut (above) and several other states last spring, as the NBA publicly embraced sports betting, but commissioner Adam Silver said his league deserves a “royalty” because sportsbooks allow wagers on their games or their “product.” He was also a panelist at a recent seminar on sports betting in Kentucky.

Pro-league lobbyists have had no success in getting an integrity fee in any state that has legalized sports betting this year, and Koenig is not alone in his no-payout stance in Kentucky.

Representative Jason Nemes (R-District 33), part of a nine-member bi-partisan working group on sports betting, was just as direct in a comment to the Lexington Herald-Leader in September: “If we provide sports leagues with that fee, what will Kentucky get in return? Can you say ‘nothing’?”

And Julian Carroll (D-District 7), a former governor turned state senator who is also on the working group, told Sports Handle via e-mail, “They want a piece of the action, which means a piece of the money. The consensus of legislators is ‘no way’.”

Lawmakers say the professional sports leagues will benefit from legal sports betting in Kentucky, and there are multiple studies that bear out their claims, both in Kentucky and in other markets with legalized sports betting.

On Tuesday, the American Gaming Association released a Nielsen study that shows that the NHL stands to see a $216 million increase in revenue in a legal, regulated sports betting market. This is the second such study that the AGA has released — the first showed that the NFL would see a $2.3 billion increase.

Keonig was quick to weigh in and use the opportunity to hammer home the point that his state is not interested in making a payout to the pro leagues:

Reason #1 that the leagues do not need an “integrity fee” when sports betting is legal. If the @NHL could get $216 million, imagine what the other leagues will get. https://t.co/XIy4Jep4Ex

The four pro leagues that registered lobbyists in Kentucky have been pushing for different goals. The NBA has been the most aggressive of the professional leagues in lobbying for a “integrity fee” or royalty, as well as forcing sportsbooks to use official data. MLB and the PGA have aligned themselves with the NBA. The NFL has been less focused on an integrity fee while seeking a mandate — either federal or state — for the use of official data as well as the ability to dictate which wagers sportsbooks may offer — in the name of integrity, testifying as such in Washington last week at a House hearing. The NHL has been noticeably absent from lobbying efforts.

Kentucky has heard from stakeholders all over the state over the last few months. During the 2018 session, a sports betting bill was floated by Carroll, but it didn’t get out of the committee. Since then, the state legislature has created a “working group” to explore sports betting, the Interim Joint Committee on Appropriations and Revenue held a sports betting informational session and a pair of horsemen’s groups hosted a seminar on the topic. In addition, a study presented at a June meeting of the state’s bar association found that the state “could be friendlier to a casino or sports wagering bill, especially in light of the general public approval of sports wagering.”

With all of the activity, it seems a good bet that Kentucky will make a move to legalize sports betting at the start of the 2019 session on Jan. 8. The session will last only 30 days, as per Kentucky state law, which calls for a shorter session during odd-numbered years.