by James Salinas
in Sports 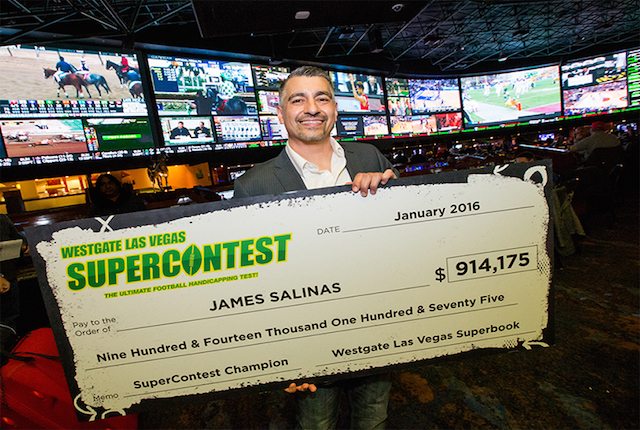 After winning the 2015 Westgate NFL SuperContest and placing third in a field of 1,854 in 2016, earning more than $1 million in prize money, I’ve frequently been asked to define my handicapping formula for success. I have spent this past offseason trying to quantify that formula. To make sense of it, I digress to the origin and maturation of my sports gaming experience. Sequestered in the man cave with a laptop and a cold one, I will channel my reflective thoughts through this keyboard to rationalize my contest achievements.

It’s a safe bet that most of us can recollect in great detail our first time. No, not that first time! I was nine years old when it happened to me, Sunday afternoon on January 25, 1981 to be precise. That’s when I lost my sports betting virginity. I bet my fourth grade playground rival Ricardo that the Philadelphia Eagles would crush the Oakland Raiders in Super Bowl XV. I was a fan of the Eagles’ Ron Jaworski, Wilbert Montgomery, and Harold Carmichael. As a kid I would impersonate those players every day during our recess tackle football games on the dirt/gravel playground in an era when kids didn’t wear bicycle helmets, sat on the edge of pickup truck beds, and bought candy cigarettes as treats.

I thought Philly was a lock to win the Super Bowl after beating the Dallas Cowboys in the NFC Championship game two weeks prior. I was so certain that I bet my entire week’s lunch money on the Eagles: $5. My first time was not a hasty experience as I suffered through three hours of sports fan horror witnessing Oakland defenders Lester Hayes and Rod Martin dismantle Jaws and Co., subsequently emptying my pockets for the week. As I made good on my debt the following day, I learned my first sports gaming lesson – bet with my head, not my heart. I suffered post-game depression as my sports fan allegiance was betrayed.

The next day when I settled up with Ricardo I was pissed. I was never a gracious loser and equated good sportsmanship to those accustomed to failure. I dreaded losing, but that fear drove me to compete and win as a kid on the playground. I approached these games as a battle for schoolyard supremacy and sports betting had now entered the fray of my competitiveness. No longer would I cheerlead for teams as a sports fan. I took down posters and pennants that blanketed my bedroom walls and replaced them with box scores and stories from the local newspaper, all while subconsciously nurturing my handicapping process.  I absorbed the game through individual statistics, game trends, and team tendencies while gravitating towards winners and leaders like Joe Montana and Al Davis – Just Win Baby! Absolutely!

Couple that mindset with the weekly Sunday morning sermon performed by Brent Musburger and Jimmy the Greek on CBS’s NFL Today, I learned what a point spread was and how to identify line value for a team to cover that number. Warped as that may be for a 9-year-old to conceptualize, it has served me quite well as a sports bettor. For years I placed and booked wagers on all sports, but the NFL was always the most exciting and profitable sport for me to play.

Teams playing just once per week allowed me to follow all media coverage leading up to Sunday. Growing up in Colorado I scoured for information in the Rocky Mountain News, Denver Post, USA Today and I watched the local evening news when they actually gave relevant reports. The NFL schedule offered an abundance of time to read through player injuries reports, game matchups and team motives, providing me with the edge needed to beat the spread.

Throughout the decades since Super Bowl XV, I have refined my handicapping proficiency as advancements in technology have forced old school cappers to cancel newspaper subscriptions in favor of instant gratification tools like Twitter. However, there are still a few nostalgic rules from my first betting experience that are applicable today and are the foundation for my NFL handicapping approach and SuperContest success. 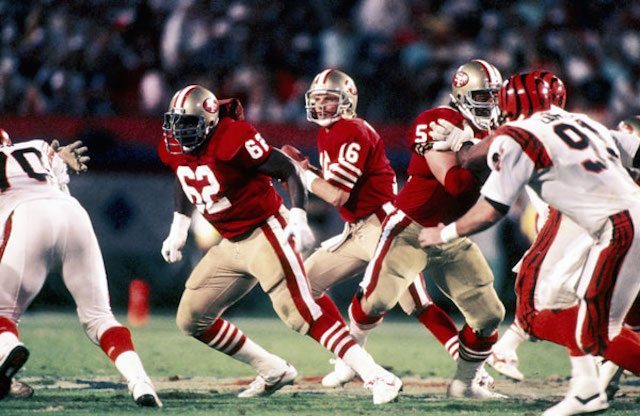 2015 was my first year competing in the SuperContest. I entered on my own and no entourage joined me for a weekend in Sin City. This was a business trip and I flew to Las Vegas alone. I happened to register during the SuperContest Weekend, an annual promotional event at the Westgate Casino filled with handicapper roundtable discussions, golf excursions, and hundreds of contestant adversaries envisioning themselves as the next SuperContest champion.

To me these were distractions that I would neither indulge in nor engage in. My mission was to win the whole damn thing. To do that I needed to narrow my sports gaming focus to only the SuperContest. I would not bet or even watch MLB, NBA, college football or basketball. No fantasy leagues, survivor pools, or futures tickets.  As a first time contestant I thought why not me? But mathematically and realistically, I accepted that this would be the most difficult bet I’ve ever tried to win.

Going cold turkey was surprisingly simple to maintain and was essential to my move atop the SuperContest standings after Week 6 in 2015. I was elated to be in first place, but the gravity of leading the largest contest field to date (1,727 entries) quickly grounded me. I controlled my contest fate and was determined to give myself the best opportunity to win by remaining disciplined in my abstinence from other sports wagering distractions.

I also knew that the start of NBA, NHL and NCAA basketball seasons was quickly approaching, which I perceived as an advantage. I figured many contestants were gamblers and would devote handicapping time to these diversions. In any other year I would be grinding time preparing my bankroll investment in these sports. I’ve had many a degenerate moment, firing square parlay bets when I was stuck, chasing halftime lines, and pounding in-game wagers to get out. But remaining true to my SuperContest commitment at the beginning of the year, I abstained. My note to self became: Do you want to gamble or do you want to win? Just Win Baby! 11 weeks later that discipline was rewarded with a SuperContest Championship! 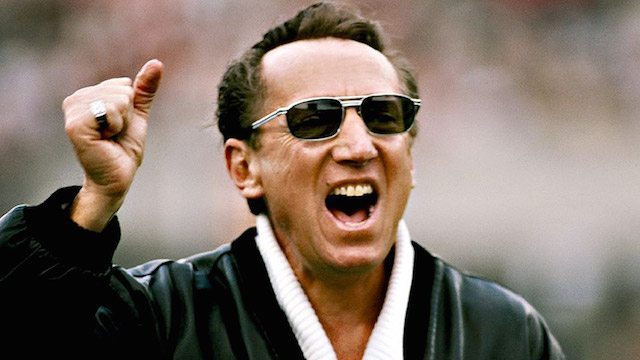 Betting discipline is vital for gaming success with any sport, but in particular the NFL. Bookmakers encourage volume betting as they create lines on anything that moves or has a pulse. Limiting yourself to a max of 16 games per week gives more time to dial in on a relatively small betting card, allowing time to maximize your research and insight on just one sport.

Divorce your fanaticism, not your spouse. In my earlier digression I detailed my annulment of sports fandom from sports betting. I learned long ago they don’t mix. True fanaticism demands unbridled devotion, which compromises objectivity. Regardless of how dreadful your team has performed, next week’s game is when they’ll finally turn it around and reward your optimistic loyalty.

In the past I could empathize with the fans’ affection for their team when cheering “we” won upon victory. But what did we tangibly win as fans? We didn’t get a cut of the game checks and the team isn’t paying our bar tab. I’m not a cynical spectator, just a practical one. Patriots fans didn’t receive a Super Bowl ring this year, but bettors who wagered on New England earned a monetary return on their investment. You need not be a fan to collect that payday. My advice? Drop the pom-poms and become a fan of winning. 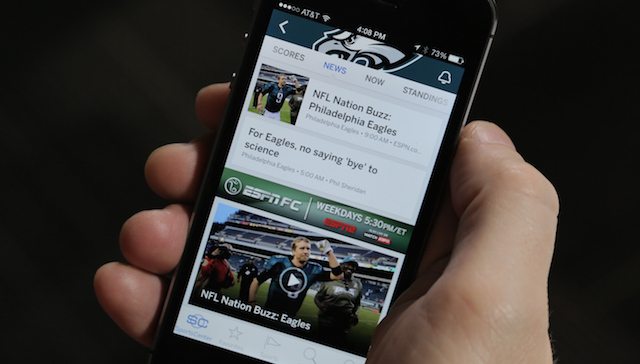 The NFL season is a physical and emotional grind for players, coaches and sports bettors too. As NFL bettors, we are seeking any edge that gives us a perceived advantage over the house. A two-fisted technological approach to sports handicapping using just a remote control and smart phone can grant instant access to practice reports, statistical data, and game matchup results filing your head with as much information as you are willing to absorb.

Filtering this infinite content is all part of the challenging and exhausting handicapping process we partake in to determine which team will cover. We are prognosticators investing in our sports wagering intellect. The exhilaration felt as you cash that winning ticket is addictively gratifying, yet never satisfying as you will inevitably invest those gains at the next opportunity. It’s your money and you bet for a reason: to win.

Many NFL media pundits have great insight and opinions, but it’s not their money at stake, so listen wisely. I rely on many sources for information on the upcoming week’s games to help me make an informed decision on what teams I will be playing on Sunday. I’m acutely conscious that I am solely responsible for these selections and accountable for my choices. Sports gaming is the only casino wager I make as it’s the one bet I know I’ll have the edge in my favor against the house. 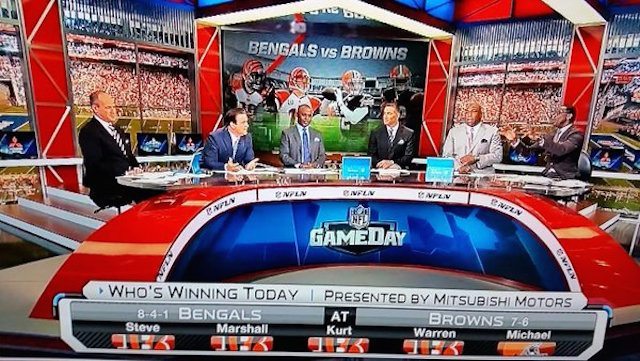 When I pull the lever at a slot machine, I have no say when those three 7s hit and I don’t have the skill to manipulate the dice to hit my point. Sports betting is the only game where I can form an educated decision as to who will cover and I trust myself to make a competent choice. It’s my money at risk, so I do the homework and have faith in the final decision.

The most consistent winning sports bettors are the ones who can accept defeat without doubting their tactics. We’ve all lost games we should have won. We’ll take solace in the fact that we were on the right side but the ball just didn’t bounce our way. Sure that happens, but win or lose, analyzing mistakes is imperative to growth as a competent sports bettor.

The blueprint is there, so ditch the need for action and load that NFL bankroll with the mindset to compete, and we’ll share victory stories at the window as we cash those tickets!

In 2015, Salinas finished at 70% against the spread while topping 1,726 participants. Just one year later, he finished third in the 2016 SuperContest (1,854 participants), proving that his skill set in selecting NFL games was no fluke. Coined “the Ultimate Football Handicapping Test,” Salinas is the only person to place in the top three in back-to-back contests with over 1,000 participants.

He recently finished first in the VSiN College Basketball Contest, correctly selecting 72% (against the spread) while besting over 1,200 participants. James has two entries in the 2017 SuperContest as well as in the winner-take-all, $5,000 per entry SuperContest Gold. Read about Mr. Salinas on ESPN.com.